Clearing The Confusion Between Private and Public 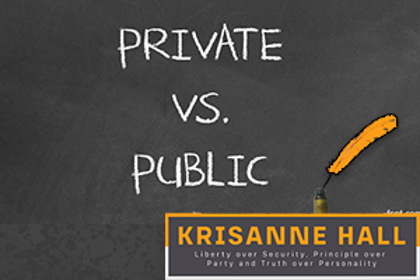 Clearing the Confusion between Private and Public

When Censorship Is OK

This may not be popular, but it is true:  One of the largest factors in the loss of #Liberty is the lack of understanding of the word “public.”  The fact remains, just because I have a business where people can come in off the street & purchase my goods that does not make my business a public business.

The term “Public” as used by those who founded America was a term reserved strictly to places, products, and affairs conducted by government with the use tax dollars. Everything else is a “private” affair.

“…if once [the people] become inattentive to the public affairs, you & I, & Congress, & Assemblies, judges & governors shall all become wolves. it seems to be the law of our general nature, in spite of individual exceptions;”  Thomas Jefferson to Edward Carrington, 1787.

Americans have been taught to believe that just because I sell donuts in a store front to people I don’t know, I am engaging in a “public” affair.

Now we are rapidly sliding down an extremely slippery slope where if you are doing something that is seen or heard by other people it is now a public affair.

Now we have people claiming that just because privately owned social media platforms allows people to use their privately owned, personally funded platforms they are now somehow “public domain;” either because the people say so or the federal government says so.

If someone has entered into a contract or a lease agreement with a private company (such as a social media platform) the remedy is civil – between two private individuals. It is NOT a matter for government force.

Hannah Winthrop, one of our founding mothers, said this:

“How often do we see people blind to their own interests precipitately maddening on to their own destruction?” Hannah Winthrop to Mercy Otis Warren, 1773

When Americans who claim to be supporters and defenders of the Constitution conflate the terms public and private, demand freedom of speech “rights” on someone’s private property, and then demand government use the power of many to force submission of a private business owner to opinions, subjects, pictures, speech, etc that they do not believe, these Americans are truly maddening on to their own destruction. They must be unaware of an axiomatic truth:

The purpose of a just government is to secure individual rights not to establish by force one person’s rights as superior to another.  This entire conversation is why I endeavor to always be, Liberty over Security, Principle over Party, and Truth over Personality.

Published by Permission of KrisAnneHall.com