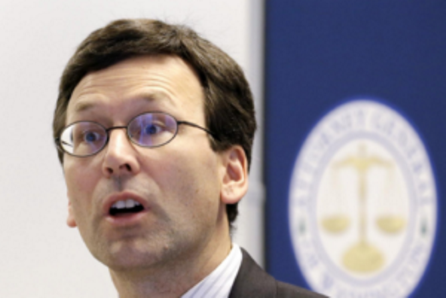 Anybody wanna say this isn’t corruption?

This session, the Democrats imposed 11 new taxes costing $27 billion. Because all their tax increases were imposed without asking voters’ permission, each tax increase will appear on the November ballot and in the voters’ pamphlet as a Tax Advisory Vote.

The first one – Tax Advisory Vote #20 — is huge. It’s a tax increase that was one of Big Labor’s top priorities:

The Office of Financial Management has identified this bill as requiring a ten-year projection of increased cost to the taxpayers or affected fee payers.

On July 12, I sent an email to the Attorney General that asked:
“Will the AG’s short descriptions for the ones below include the same 10 year cost projections identified below?”

On July 13, I sent another email:
“Once your office identifies all the tax bills but before you notify Sec of state, can u let me know 10 year cost for bill and if it matches amount on list I provided?”

On July 16 @ 9:52am, I sent another email:
“Plz indicate the 10 year cost projections total your office will assign to each tax advisory vote.”

Your office will soon be receiving the Tax Advisory Vote #’s from the Secretary of State.

The definition of “raises taxes” is very specific — RCW 43.135.034(1)(b) reads:  (b) For the purposes of this chapter, “raises taxes” means any action or combination of actions by the state legislature that increases state tax revenue deposited in any fund, budget, or account, regardless of whether the revenues are deposited into the general fund.

The short description for each tax advisory vote includes specified text under RCW 29A.72.283: “The legislature imposed, without a vote of the people, (identification of tax and description of increase), costing (most up-to-date ten-year cost projection, expressed in dollars and rounded to the nearest million) in its first ten years, for government spending. This tax increase should be:

For the tax advisory vote for Second Substitute House Bill 1087, I ask that you consider this short description for it:

The legislature imposed, without a vote of the people, new payroll taxes, costing $8,036,000,000 in its first ten years, for government spending. This tax increase should be:

None of these emails received a response.

Now I know why.

Here is the short description the Attorney General assigned on Monday to Tax Advisory Vote #20:

“The legislature imposed, without a vote of the people, an additional wage premium for long-term care services, costing an indeterminate amount in its first ten years, for government spending. This tax increase should be:
Repealed [ ]
Maintained [ ] “

So the AG has purposely hidden this $8 billion+ tax increase, preventing the people from seeing it or knowing about it when they vote on it.

This tax increase was one of Big Labor’s top priorities. Bob Ferguson wants Big Labor to back him when he runs for Governor.

Does making Big Labor’s $8 billion+ tax increase disappear sound like corruption to you?

In 2017, I legally challenged the AG the last time he went rogue on a tax advisory vote. The courts later ruled that my lawsuit needed to be filed within the 5 day window before the short description was completed.

So this time, I specifically asked the AG: “If your office plans to use a different cost projection due to a different interpretation of ‘raises taxes’, please notify me during the 5 day window so I can seek judicial review.”

By not responding and assigning a short description that clearly violates the law, the Attorney General has prevented judicial review.

Corruption comes in lots of different shapes and sizes — anybody wanna say this isn’t corruption? 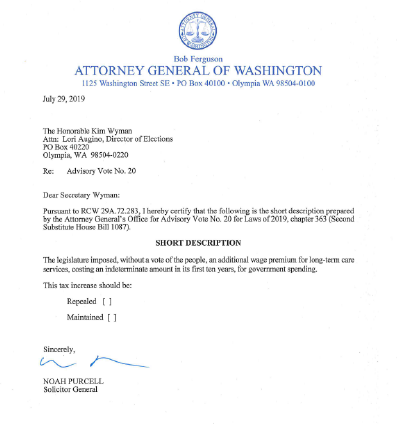