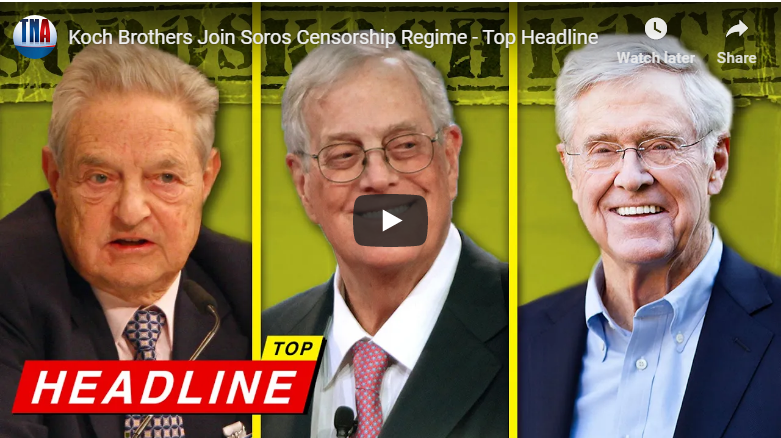 Leftist advocacy groups like the ADL, Vox, and the Southern Poverty Law Center are pushing their anti-conservative standards on Facebook, Google, and Twitter to police political speech and thought. Now they won’t only have Soros money to help them carryout their censorship of conservatives, but also the collaboration of the Koch Brothers. 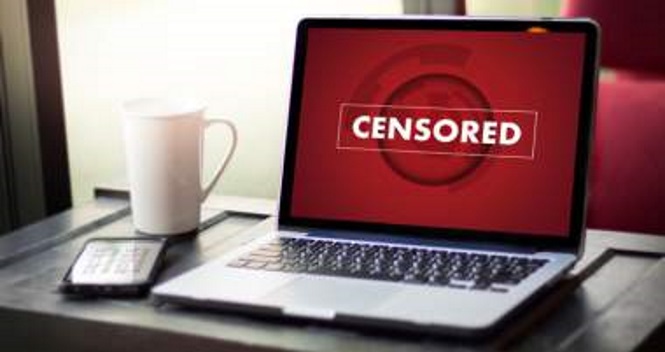 Long leftist bugaboos owing to their financing of conservative and libertarian causes and candidates, brothers Charles and David Koch are now showing their liberal side: They’re allying with tech companies, universities, and fellow billionaires to quash what they call “online extremism.”

As the Observer reports, “On July 17, the After Charlottesville Project will host its second summit in San Francisco, California. Founded in the aftermath of the deadly 2017…[violence in Charlottesville,] Virginia, the conference brings together political and business leaders to discuss solutions for curbing political terrorism. While last year’s gathering in Missouri involved grassroots and city response initiatives, the focus of this year’s summit will involve the ‘private tech sector’ and ‘best practices on the fight against hate and extremism online,’ according to the event’s press release.”

“Representatives for the Charles Koch Institute and the Anti-Defamation League [ADL] will join executives from tech companies which currently include Eventbrite, Mozilla, Pinterest, Patreon and Airbnb,” the site continues.

But the reality is far different from the marketing. The event is sponsored by Comcast NBCUniversal; the Kresge Foundation; and, most notably, the Soros Fund Charitable Foundation, and it “intends to exploit the tragedy of Charlottesville to push for even more Orwellian censorship,” Big League Politics (BLP) warns.

Exposing some of the participants’ background, BLP writes, “The ADL is an anti-conservative, anti-constitutional organization that openly boasts about how it lobbies Google, Facebook, Twitter and other tech giants to censor political dissidents.”

“Pinterest was recently exposed for censoring pro-life voices on their platform while Patreon and Airbnb are notorious for capriciously banning right-wing commentators from using services offered by their companies,” BLP also informs.

Moreover, the “Koch Brothers and their functionaries will be working alongside George Soros and a band of tech monopolists to make sure that arbitrary censorship by Big Tech monopolists becomes normalized heading into 2020’s Presidential elections,” BLP further relates.

Soros is the billionaire financier notorious for funding left-wing causes — such as advancing marijuana legalization and the campaigns of secretaries of state (who can influence our elections) — the world over.

Combating “extremism” and “hate” may sound noble enough, but many instinctively sense the problem. First, precision in thinking matters here: Since “hate” is a feeling and can’t be objectively measured without mind-reading technology, what’s actually being banned are what certain people consider manifestations of hate.

Therein lies the rub. Unless someone says explicitly, “I hate ______” (and he could be lying), we’re left to discern his mental state and motivations from either his position statements or his delivery — or both. But does the expression of a position, and the manner of speaking, always and definitively indicate hateful motivations?

Note that we can hold an incorrect position with good intentions or the correct position for either the right or wrong reasons. For example, it’s fashionable today (and politically convenient) to label opposition to homosexual behavior hateful. But the people stigmatizing such behavior generally do the same with adultery and fornication. Does anyone assume, however, that they hate adulterers and fornicators?

It’s silly. One could hate the sinner as well as the sin, but the belief also could just be the result of sober intellectual analysis.

Moreover, hatred of others, though sinful and corruptive to one’s own soul, is not illegal. It’s also irrelevant, as the true or untrue nature of a proposition is not altered by the motivation for espousing it. Does 2+2 cease being four if someone claiming so hates five?

Of course, a major reason leftists accuse conservatives of being hateful is projection: Since they’re disconnected from Truth and reason and hence are emotion-enslaved, they make virtually no effort to tame the default human tendency to hate the actor along with his actions, and they naturally assume that others must conflate both as well.

Yet it still can’t rightly be stated that a given leftist tars conservatives who oppose his agenda as “haters” because he himself hates them. There can be other motivations — such as political expediency.

For example, presidential contender Kirsten Gillibrand (D-N.Y.) just claimed, essentially, that pro-lifers were hateful, likening their beliefs to bigotry and saying they’re “not acceptable” (video below). 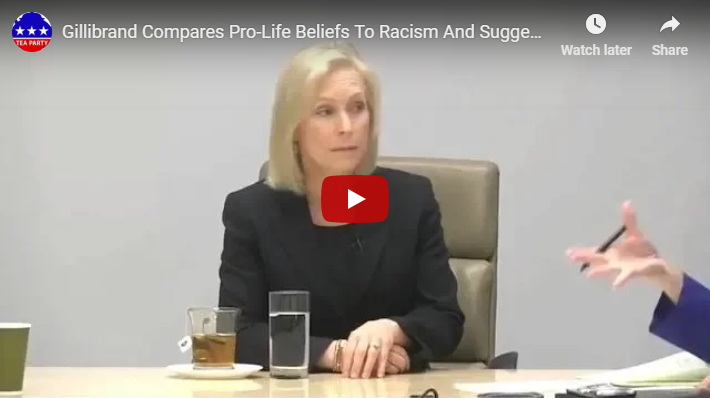 Yet it wouldn’t be fair to say Gillibrand hates pro-lifers; it wouldn’t even be correct to state that she and all her fellow travelers hate unborn babies, even though, applying leftist logic, one could consider this conclusion a given since these leftists advocate murdering them. Rather, Gillibrand, like many others, is a political prostitute who’ll say literally anything for political success (and still is polling at only one percent).

“Extremism,” too, is an interesting concept. The late Senator Barry Goldwater (R-Ariz.) once famously said, “Extremism in the defense of liberty is no vice,” but it’s even more correct to say that extremism reflecting Truth is a virtue.

After all, being an extremist doesn’t mean you’re wrong, only that your views deviate greatly from those of the (perhaps errant) mainstream. A groundbreaker is often only a groundbreaker because he breaks from the popular and the pack. Just consider how many scientists and social reformers — from Galileo to Semmelweiss to Joseph Goldberger to the early abolitionists — were called extreme before they were called correct. Why, an extremist is sometimes just a man who’s right 50 years too soon.

But don’t worry, the leftist Thought Police won’t tackle the nuances of discerning hate or separating good and bad extremism. They have a simpler formula:

Just label as hateful and extremist anything contrary to your agenda.

This does mean anything, too. Just consider some things leftists have called “racist” the last decade, courtesy of Town Hall’s John Hawkins (all quotations his):

Even more idiotic was the Oregon “educator” who claimed in 2012 that peanut-butter-and-jelly sandwiches can be “racist.”

Question: Are these people qualified to censor even their own mouths, let along the information flow to 328 million people?

Yet they are censoring it. This is why conservatives get banned from social media on a whim while leftists are given free rein to spew hateful rhetoric. It’s also why an expert warned in 2018 that Google and Facebook (and Twitter, I’ll add) had the power to shift “upwards of 12 million votes” in that year’s midterm elections.

Of course, if Soros and the Koch Brothers et al. have their way, it may be 20 million votes in 2020.