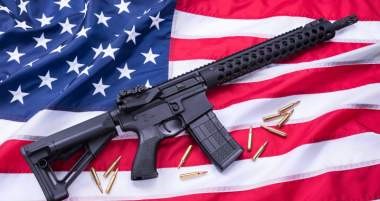 A segment on left-leaning MSNBC provided, perhaps unwittingly, a powerful lesson in why we need to keep the Second Amendment and protect the right to keep and bear arms.

Liberal anchor Andrea Mitchell expressed surprise that socialist dictator Nicolás Maduro is still clinging to power. MSNBC reporter Kerry Sanders offered an explanation: “Not only hanging on, but he appears to still control the military. You have to understand in Venezuela, gun ownership is not something that is open to everybody. So if the military have the guns, they have the power.”

As brutal communist tyrant Mao Tse-tung is quoted as having said, “Power comes out of the barrel of a gun.”

Advocates of private gun ownership are often ridiculed when they make this very argument — the right to keep and bear arms is critical, because it is the last line of defense against a tyrannical government — but in Venezuela we have a textbook example of why this is true.

It is an argument that is often used by conservatives, libertarians, and constitutionalists to support the Second Amendment and the right of individual Americans to keep and bear arms. Those on the Left avoid even alluding to this principal reason for the inclusion of the Second Amendment in the Bill of Rights. Instead they usually voice their support for hunting and sport shooting, as though that is why James Madison made the right to keep and bear arms a protection for Americans the second amendment in the 10 articles that make up the Bill of Rights (Madison crafted 12, but only 10 were ratified by the states in 1791).

For all the talk about the Second Amendment, none of the Founding Fathers would have thought it gave Americans the right to keep and bear arms, but was only an added protection to an existing right. Madison originally opposed adding a Bill of Rights to the Constitution, because he argued that the newly-created federal government had no enumerated right to infringe on basic rights such as freedom of religion, speech, press, and the right to keep and bear arms. He expressed fear that if such a listing was made, someone might argue that Americans only had those rights listed. That is why Madison included the Ninth Amendment, which basically said that the listing of rights in the Bill of Rights was not a listing of all the rights Americans retained.

In The Federalist, No. 46, written in support of ratification of the Constitution, and therefore penned a few years before the Second Amendment was even added to the Constitution, Madison explicitly addressed why the right for individual Americans to keep and bear arms was so important: “Those who are best acquainted with the late successful resistance of this country against the British arms will be most inclined to deny the possibility of it,” noting that Americans possessed something private citizens did not possess in most other countries: “the advantage of being armed.”

Of course, without the Second Amendment, we suppose Americans could use rocks (as Hungarians did — unsuccessfully — against Soviet tanks in 1956) or even yellow vests, as protestors are now doing in France.

Dictators understand the advantage of disarming the population of their country. Adolf Hitler used an existing gun-registration law in Germany to disarm potential “rebels,” such as the Jews. In Cuba, Communist dictator Fidel Castro first implemented gun registration (ostensibly as a crime-control measure), then a few months later used the registration lists to round up the guns.

In short, when gun controllers start talking about their support for hunting and sport-shooting, Americans who understand what the real reason is for the Second Amendment need to stop such diversionary tactics. Madison did not include the Second Amendment in the Bill of Rights so Americans could check their rifle out of a government-run arsenal and go deer hunting (although hunting is important for the economies of many American families in rural areas), or so someone could go shoot at a paper target in a gun range.

The Second Amendment was included to protect the right of Americans to check the power of the newly-created federal government. After all, it would only take one well-placed bullet to end the dictatorship of Nicolás Maduro.