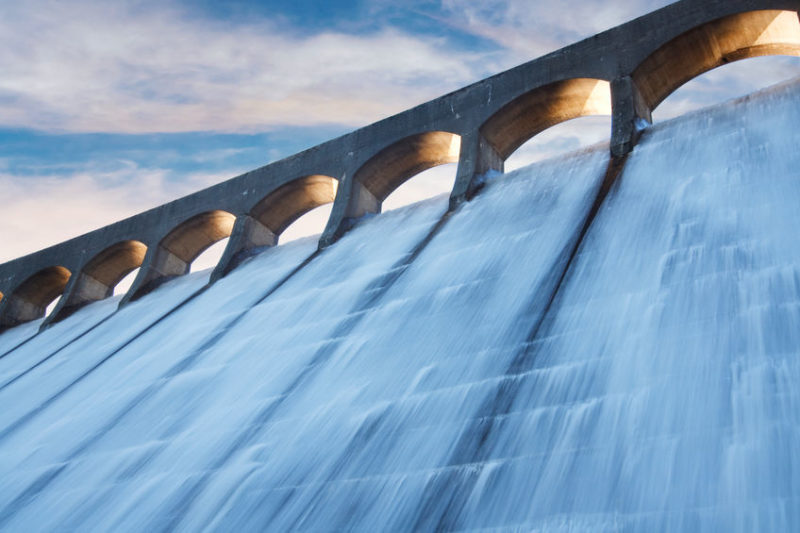 This article is the third in my series about America’s need for dams. The first was about adding hydropower to existing unpowered dams. The second explained the need to finish the U.S. flood (and drought) control program.

The present article is about the huge opportunity to build new hydropower dams. The Department of Energy has studied this issue and they say we could easily add a whopping 50,000 MW of hydro generating capacity. That is roughly a 50% increase to our present capacity.

Hydro is still our biggest renewable energy supplier, despite the recent buildup of wind and solar capacity. According to the Energy Information Agency, about 7% of our juice comes from dams, compared to 6.6% from wind and a piddling 1.6% from solar. (Natural gas, coal and nuclear power do most of the work.)

Hydropower has several significant advantages over wind and solar power. First of all it is what is called “dispatchable” in power engineering. This means it can be generated when needed, unlike wind and solar which only happen when they happen, needed or not.

This intermittency is a huge, probably insurmountable, problem with wind and solar power. The answer appears to be batteries, which are expensive because they are full of chemicals and rare materials in a delicate medium. Disposal is also a major issue with batteries.

With hydro dams the power storage medium is the water sitting inside the reservoir. In many cases this can even be used for recreation, as well as flood control. This beats chemical batteries for sure.

Second, hydropower facilities last a very long time, while wind and solar are relatively short lived. In fact the disposal of used solar panels is already starting to become an issue. Dams and reservoirs do not deteriorate over time.

Third, for many people a lake is far more pleasing than a vast array of industrial wind towers or solar panels. Reservoirs teem with life while solar arrays kill all vegetation beneath them. Ugly wind towers fill previously beautiful views with distracting motion, while lakes lie low and have their own calm beauty. These aesthetic differences are far from trivial.

The Office reached this conclusion: “The Hydropower Vision analysis finds that U.S. hydropower could grow from 101 gigawatts (GW) of capacity in 2015 to nearly 150 GW by 2050. The factors that led to the hydropower industry’s historical growth over the past century are different than the opportunities and challenges facing the industry today. Continued evolution, including transformative technical innovations able to meet the co-objectives of environmental sustainability and low-carbon energy, will be critical to enabling hydropower growth. The Hydropower Vision will help the nation usher in a new era for hydropower—one that ensures that America’s first renewable electricity source maintains its place in our nation’s 21st-century energy system.”

In short, if people want more renewables then hydro is a good place to look. In fact the Obama-era DOE analysis is overly cautious about building new dams. Nor does it include the co-benefits of flood control, recreation, etc., not to mention hydro’s great superiority over intermittent wind and solar when it comes to renewable power. A sound study that includes all of these factors will give hydro very high marks.

Hydro is the place to go.