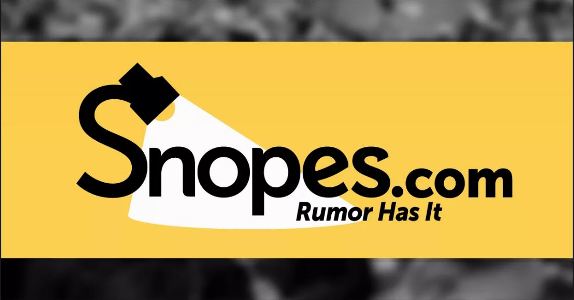 One of the more interesting phenomena of the internet age is the rise of self-appointed Leftwing “fact checkers” who have created a cottage industry of undermining straight news reporting critical of Democrats and Leftist causes.

One of the more prominent examples of this phenomena is Snopes.com, which began as a website debunking urban myths on the internet and has gradually moved further and further Left to become a favored tool of the Left for shielding Democrats and helping Leftwing advocacy groups smear conservatives as purveyors of “fake news.”

One of the most egregious recent examples of Snopes.com’s Leftist tilt is its defense of Native American Nathan Phillips from claims of stolen valor leveled at him after he instigated the post-March for Life confrontation with the Covington Catholic High School students.

While Snopes.com rated the charges that Phillips falsely claimed he was a Vietnam veteran as “unproven” and posted a lengthy defense of him here, the military culture website “Task and Purpose” had already exposed Phillips stolen valor claims.

Paul Szoldra explained in a post on taskandpurpose.com, that Phillips has a long history of making “stolen valor” claims:

I was going to bring up his troublesome claims of being a “recon ranger” — which he was not. I was going to reflect on his claim that he was a “Vietnam-times veteran” who came home and was “spit on” and “called a baby killer,” despite his service record keeping him in the United States, and it being unclear where he was claiming to have come home from.

But then, another video emerged.

Many news organizations initially described Phillips as a Vietnam veteran, until they were forced to issue corrections. Well, they’re going to need to issue a few more, since Phillips apparently slipped up in 2018 and claimed that he was “a Vietnam vet” and he was “in theater” during the war — which is categorically false.

How could Snopes.com get things so wrong on the Nathan Phillips investigation?

Simply by not looking, because exposing Phillips as a stolen valor faker would destroy the Leftwing narrative that the Covington Catholic kids were exemplars of “white privilege,” had disrespected a veteran and Native American “Elder” and were racists who deserved to be destroyed. (You can read our coverage of the Nathan Phillips – Covington High School kids controversy through this link.)

As bad as Snopes.com covering for Far-Left radicals like Nathan Phillips is, what they have done to undermine the credibility of center-right straight news sources is even worse.

In a recent “investigation” titled “Hiding in Plain Sight: PAC-Connected Activists Set Up ‘Local News’ Outlets” Snopes.com managed to smear The Daily Caller and the state specific (sometimes hyper-local) news sites The Tennessee Star, The Ohio Star and The Minnesota Sun and Battleground State News all in one article.

(Full disclosure we allow The Tennessee Star, The Ohio Star and The Minnesota Sun and other news sites to re-post CHQ content free of charge and have referenced their content on occasion.)

The Snopes.com “investigation,” apparently prompted by a “tip” from an undisclosed source, posits that The Tennessee Star, The Ohio Star, The Minnesota Sun and The Daily Caller are all part of a vast dark money conspiracy to affect the results of elections in swing states.

In their attempt to make, without evidence, The Tennessee Star, The Ohio Star, The Minnesota Sun and The Daily Caller all part of this vast Rightwing conspiracy Snopes.com has gone from merely leaning hard Left to entering the realm of the conspiracy theories and urban myths it once debunked.

The “tells” that give the game away are numerous, but perhaps the most egregious of the many gratuitous smears are those, starting in the very first paragraph, attempting to link The Tennessee Star, The Ohio Star, The Minnesota Sun and Battleground State News to Russian bots:

Even if you’re jaded by the torrent of daily headlines, including Russian meddling in U.S. election processes, you will want to spend some time with this story.

It is perhaps for that reason that an estimated 30% of all links pushed by the Russian troll farm known as the Internet Research Agency during the 2016 presidential election were to stories on local news websites. In some cases, these Russian imposters created their own fake local news sites.

Or award-winning talk radio host Steve Gill’s long career as a political commentator on Nashville television station WKRN, his radio show on WLAC and his book about the 2008 presidential campaign, “The Fred Factor: How Fred Thompson May Change the Face of the ’08 Campaign.”

And Christina Botteri? If she were a Leftwing woman in tech and the Managing Editor of a couple start-up local news sites, she’d get her own spot at SXSW. However, Snopes.com apparently dismissed her because of her background in conservative politics.

Snopes.com spent a great deal of space developing the charge that, “The Tennessee Star fails to disclose the deep connections between editorial staff and the political entities they cover.”

We checked and could find no similar “investigation” into whether Jeff Bezos had a political or ideological agenda when he bought The Washington Post. And what about all the Democrats and Leftwing activists who move seamlessly between political activism and the establishment media?

Erick Erickson documented a small portion of them in a December 15, 2017 article for RealClearPolitics:

Ruth Marcus, who heads the Washington Post Editorial Board, is married to the Obama Administration’s former Federal Trade Commission Chairman. Jonathan Allen had been at the Politico before going to work for Debbie Wasserman Schultz, then back to Politico before going to the left leaning Vox. Now he is at NBC News. Andy Barr worked for the Politico before leaving for Democrat politics. Michael Scherer was at both Salon and Mother Jones before going to Time. Laura Rozen was at Mother Jones and the American Prospect before Foreign Policy magazine. Even Nate Silver had started out at Daily Kos. Then, of course, there is Matthew Dowd, who worked for scores of Democrats before working for George Bush. That, though he later washed his hands of Bush, bought him street credibility with ABC News to become its senior politically analyst alongside George Stephanopoulos, formerly of the Clinton Administration.

So, how is it that Democrat political operatives, such as George Stephanopoulos and those listed above, move between the media and politics with no investigation by Snopes.com, but Michael Patrick Leahy, Steve Gill, and Christina Botteri are not allowed to?

What’s more, in an email exchange between Leahy, Kasprak and Palma obtained exclusively by CHQ Leahy made it clear where the Star News Digital Media, Inc. properties are coming from:

The mission of Star News Digital Media, Inc. is two-fold:

(1) To present state, local, and national news of interest to readers in red states like Tennessee and key battleground states who voted for President Trump and his agenda in 2016, delivered from a limited government, constitutional conservative populist perspective in an online format and through both local and nationally syndicated radio programming.

(2) To publish books and related materials on the Constitution, civics, government, and American history for use by secondary school students that promote a traditional, constitutional originalist perspective on the United States, and to conduct student competitions and parent workshops that help parents to raise children who believe in America.

Yes, our focus is on local, fact-based, news that provides readers information from a center right perspective as an alternative to the mainstream media outlets that are increasingly moving further to the Left. This lurch to the Left is evidenced by the recent Buzzfeed bogus reporting about President Trump that was specifically debunked by the Special Prosecutor Bob Mueller and the media debacle of attacking school kids in Kentucky for not subscribing to the approved views of the extreme Left. We have been delivering exactly that since The Tennessee Star launched less than two years ago, and an example of the “huge demand” we cited is the fact that we now have over 10,000 Facebook likes at The Tennessee Star on Facebook and are consistently drawing over one million views per month, with that figure moving towards two million a month over the last 60 days. The model and “proof of concept” in Tennessee is working extremely well, and the impact that our site has had on Tennessee politics over the last two years is undeniable.

In other words, Leahy, Gill, and Botteri identified a niche market for conservative content merged with local news and proceeded to fill it, and in the process attracted advertisers who want access to those same million eyeballs a month on the screen.

Contacting advertisers is a “tell” to us that the motive behind the Snopes.com “investigation” of the Star News Digital Media, Inc. properties was conducted in the same spirit Media Matters and other Leftwing trolls do as they work to deplatform and demonetize conservative content on other media see recent attacks on Tucker Carlson for example.

Why else would Snopes.com “investigators” make a point of contacting and smearing Tennessee Star advertisers? Again, without evidence, Snopes.com suggested that:

Is it possible that the Tennessee Star has a few high-profile benefactors who support the company’s mission financially and in return see their family businesses promoted on the site? Would such an arrangement be considered advertising? Potentially, but this type of advertising arrangement would be an outlier when compared to virtually any other internet media outlet.

We will close with what may be the most bizarre attack of all the smears contained in the Snopes.com “investigation” and that is that being effective proves Star News Digital Media, Inc. is not a straight news organization.

The Snopes.com article cites as proof that The Tennessee Star is “disguising conservative activism as journalism” the fact that their coverage of a tax-raising Republican helped to defeat him in the GOP Primary.

Leahy disputed that characterization, wrote Snopes.com, but in a somewhat counterintuitive defense against this claim, told us a story about how successfully they had swayed political discourse in Tennessee:

Our reporting on GOP gubernatorial candidate Randy Boyd’s contributions of $250,000 to a Nashville non-profit organization operated by the former national Chairman of La Raza — Renata Soto — and our giving him the nickname “LaRaza Randy” created a political perception of him among Republican voters, which he was never able to overcome. He spent $20 million and finished second to Bill Lee in the August 2018 Republican gubernatorial primary in Tennessee.

In other words, affecting the outcome of an election is certainly not journalism, it’s “disguising conservative activism as journalism.”

That would certainly be news to the distinguished journalists who make up the Pulitzer Prize committee who awarded the 2018 Investigative Reporting prize to the Staff of The Washington Post, “For purposeful and relentless reporting that changed the course of a Senate race in Alabama…”

The laughable fiction that real journalists don’t work to affect the outcomes of elections shows just how little Snopes.com knows about real journalism, how far to the Left it has moved, and how cynical it is to use the fiction of a “tip” from a political opponent as a pretext for smearing Leahy, Gill, Botteri and Star News Digital Media, Inc. The real game Snopes.com is playing is not to conduct an “investigation” it is to cripple a new and innovative vehicle that challenges the Liberal dinosaurs of the establishment media.

George Rasley is editor of Richard Viguerie’s ConservativeHQ.com and is a veteran of over 300 political campaigns. A member of American MENSA, he earned his first newspaper byline in 1976 for an article in The Goshen (Indiana) News. His family began in the newspaper business in 1831.