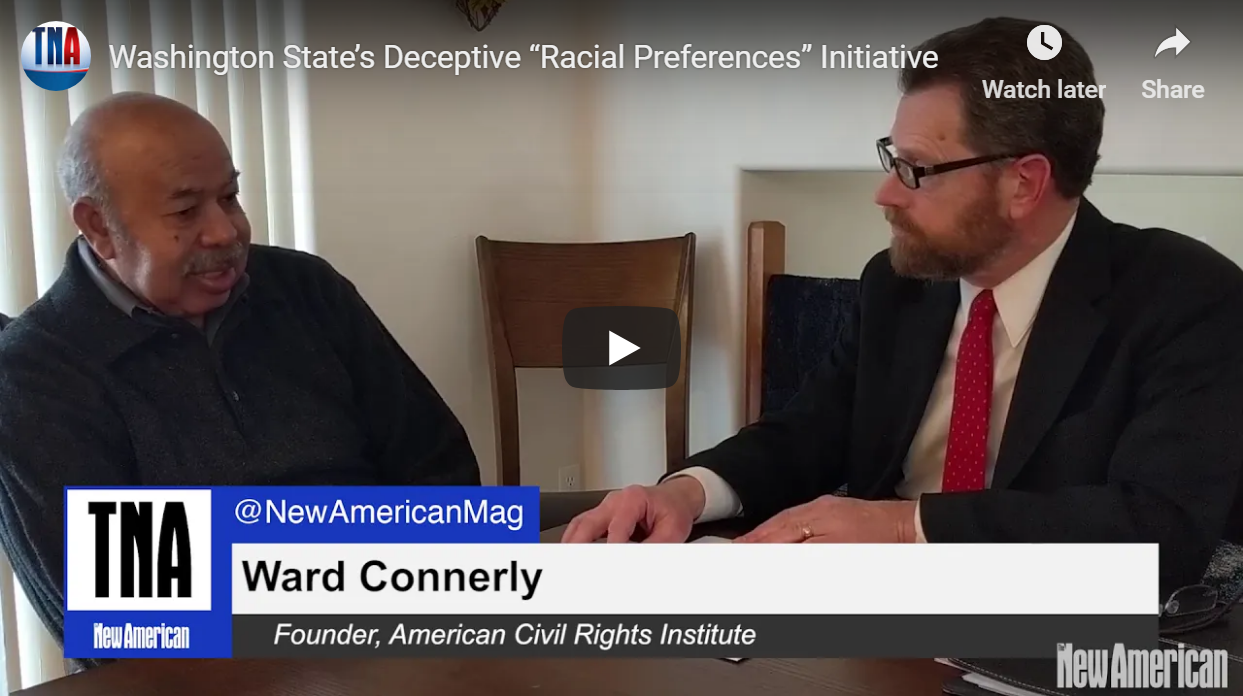 Ward Connerly is a businessman, author, political figure, and former regent of the University of California. He is the author of Creating Equal: My Fight Against Race Preferences and Lessons from My Uncle James: Beyond Skin Color to the Content of Our Character.

Mr. Connerly is also the founder and chairman of the American Civil Rights Institute, a national nonprofit organization that works to end racial and gender preferences.

He is most widely known as the leader of Proposition 209, California’s historic referendum to end so-called affirmative action. Prop 209 became law in 1996, with voters approving the measure by a margin of 55 to 45 percent. Prop 209 outlawed race- and gender-based preferences in state hiring and state university admissions.

In 1998 Ward Connerly led a similar effort that successfully passed I-200 in Washington State, with 58 percent of the vote. And in 2006 he led an effort that passed Prop 2 in Michigan to do away with racial preferences under the guise of “affirmative action.”

Now, after having moved recently from California to Idaho, Connerly is actively working with opponents in neighboring Washington to stop I-1000, an initiative aimed at overturning I-200, the 1998 Connerly-led effort that successfully banned racial preferences. The I-1000 proponents claim that their new initiative is not about reinstituting racial preferences, but about achieving “diversity, equity, and inclusion.”

Connerly says the initiative is dishonest and deceptive in several ways. He points first of all to the initiative’s redefinition of “preferential treatment” and “affirmative action.” Proponents claim that I-1000 would continue the ban on preferential treatment that considers characteristics such as race, sex, color, ethnicity, national origin, age, sexual orientation, disability as the “sole” factor for education or employment opportunities. However, Connerly says, the proposed new definition of “affirmative action” would enable state agencies to use one or more of these characteristics as “factors” to increase Washington’s “diversity in public education, public employment, and public contracting.”

They are playing word games, says Connerly, knowing that most Americans favor a merit system rather than a mandated, politicized quota system. Another feature of the initiative that he sees as especially disingenuous is the addition of people with disabilities and military veterans to the mix. This was done, he says, simply to camouflage the real intent of the initiative and to create a “grab bag of goodies” for so many constituencies that it would be impossible to stop it.

Connerly sees incalculable harm coming from the initiative, should it be enacted.  “There is no initiative that I’ve seen in all of my years that parallels or even comes close to what this initiative, I-1000, would do,” he says. “I greatly fear that they’re going to slam-dunk this thing, and not only upset our [1998] initiative but make affirmative action like a Christmas tree with everybody having some goodies.”

“They’re not serious about veteran status,” he remarked, at a recent speech in Spokane Valley, Washington. “I have no problem with giving veterans extra benefits but it should not be mixed in with race. Nor should people who are deaf or blind be mixed in.”

“You see there is a reason why civil rights legislation was exempted from many kinds of preferences when the Congress passed the Civil Rights Act of 1964,” Connerly noted. “The reason was race and color are so-called immutable traits. By including everything that falls under the umbrella of identity politics you’re giving the governor the power to engage in discrimination on a massive level. And everyone will look the other way, sort of, because there is a little present for them under the tree: it’s their own identity.”

Connerly says that if the initiative passes, he is sure that “it’s not going to be applied to veterans or some of the others, and it will be applied solely on the basis of race. And those that are pushing this are a number of minority contractors who saw their good thing taken away when our initiative I-200 passed in 1998. They want to restore the preferences that they were getting.”

“When I say ‘minority contractors’ I’m really talking about black contractors, who were getting fat contracts under the old racial quota system,” he says. Connerly, who is black, says the only group not included in the initiative, and the only group it is now considered acceptable to discriminate against is “white males.” However, white males are not the only group that will be adversely affected. He points out that Asians for Equality has come out against the initiative. Asian Americans, and particularly Chinese Americans, who have a strong history of promoting academic achievement, realize that they will be severely disadvantaged if the quota system is reinstituted. Regardless of how it may be disguised as “diversity, equity, and inclusion,” they will lose academic and employment opportunities to less qualified applicants, Connerly warns.