Idaho freshman Congressman Russ Fulcher held a meet and greet at Coeur d’Alene’s Chamber of Commerce on Thursday the 21st.  His strong supporters weathered a cold dank day to be there for a report on his first 7 weeks in Washington D.C.

After thanking those in attendance for coming Fulcher opened with the remark that they probably had other things to do than come see a swamp rat.  “It’s always good to leave Washington DC and come back up the governing hierarchy to the state. We’re off and we’re in the fray.  I come to you with seven weeks of tenure [laughter], and as a freshman in the minority party, I carry a huge stick [laughter again]. I have met the president and speaker on multiple occasions and I assure you they are not seeking my counsel on a regular basis. Not yet.”

He reported that he was successful in being assigned to the Resource Committee which he pursued as his number one choice because of the massive impact on Idaho.  He was also assigned to the Education and Labor committees.

He said there are positive things, believe it or not, that are transpiring. However he chose to cover some of the negative and come back to the positive.

“Of the few surprises that we came into, I would say that one is the coming to grips with the intensity or understanding the intensity of the vitriol against this president.  Regardless of what you think of the president, at least to me, it’s concerning, that certain unelected senior officials, members of agencies and so on, will seemingly say or do anything to try to oust this man. It concerns me for a number of reasons, but any time unelected people target and oust a president they can target anyone. Regardless of your feelings against President Trump, what’s probably the most concerning to me, is watching that unfold.”

On the positive side, Fulcher stated that he has a direct channel to the executive branch agencies and they have been given marching orders to work with the states. He said agency heads have been reaching out to members of Congress.  “If they are 10% as willing as they say, that’s a good thing. So that’s where my focus is going, I can assure you.

“There is so much that I don’t know. A lot of our time and effort has been spent 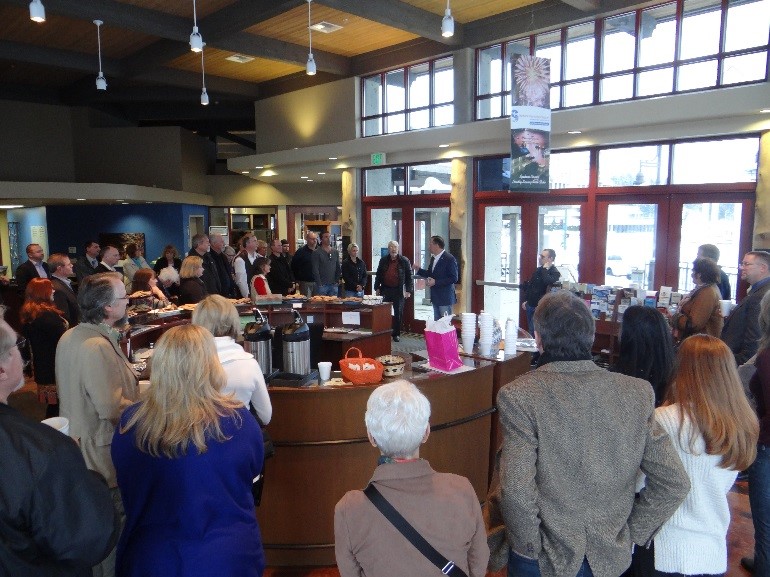 getting as educated as we can. And that’s where you come in quite frankly.  I talked to a number of you this evening and prior. If you’ve got insight on some of the things coming down the pike, if you have strong opinions if you have expertise, we want to hear about that. We will use that counsel.”

Fulcher then acknowledged Tim Kastning as his Regional Director for Northern Idaho and Mike Huntington who is in Meridian and coordinates all of their state efforts. In addition to the local Coeur d’Alene office and Meridian they also have an office in Lewiston and Washington DC.

He pointed out that any progress they make over the next two years will be really twofold:  Work on issues where they can impact laws or regulations or rules by working with these agencies, and offering constituents services here to people who need help like the veteran services or Medicare or whatever those federal things are that people need to navigate.

He also acknowledged that Sid Smith and Karen Roetter from Senator Risch’s and Senator Crapo’s offices were present and mentioned that the delegation from across Idaho communicates on a very regular basis including Senator Risch, Senator Crapo and Representative Simpson. “We frequently have different views on different things, but, to the extent that we can work together and compare notes and resources, we are doing that.  And, we need you.”

Fulcher reported that the house floor of the US Congress is a very, very divided place. “If you watched the state of the union speech you saw that. It is stark. As most of you know I’m a Republican. I don’t go out and try to stage a Republican versus Democrat statement. But the reality is by their own verbal declaration there is at least one third of the colleagues in that chamber that ultimately profess socialism. Just straight up by name. That conflict is rising and growing. And so for that and other issues I do ask for your prayers.

“I will go back to the president again for a second because I have had a couple opportunities to interact with him but I see his staff every day. I’ve never seen anyone take as much criticism and he’s uniquely wired for it. But what happens over the next couple of years is going to have a monumental impact on the direction of this nation. So prayers, counsel and wisdom is all the best thing.”

On the subject of Alexandria Ocasio Cortez (OAC) he stated that the media absolutely loves her because she says things that are outlandish and they love the direction.

“I know some of you saw a counter I did to the Green New Deal called the Red New Disaster. She has no real experience in economics or how business works.  There is no perspective, in my opinion, and the problem with that is that as outlandish as some of these things are, they do move the discussion bar, in my opinion, in the wrong direction. It encourages those who really don’t understand how capitalism works, how societies work, how economies work and how families are structured to accept this socialistic mindset. The impact sheet she will have will be exactly how she’s doing it. It’s through the media, it’s not going to be with her passing a lot of legislation. That’s not her MO. The short answer is that there is not a lot of respect among colleagues however there is a significant impact outside of that actually with some of the younger folks. 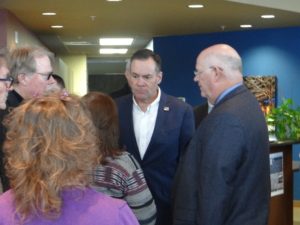 When asked about voting integrity and voter ID laws Fulcher said “There is a Democrat sponsored bill, I think it’s HR 1, that hasn’t been heard yet but it would do just the opposite. It will remove any need for ID to vote, as a component that’s called campaign reform which equates to taxpayer money being used for campaigns. That will pass the house. There are the majority votes for that to happen. We will put as many speed bumps in front of it as we procedurally can but it will highly likely pass the house. I and other colleagues got together with other Senate counterparts. I think it’s likely that it won’t even get a hearing in the Senate. But the point is it that that debate is out there. It’s going to be a very large effort to try to retake that majority and then once we have it, do something with it. That was part of the struggle prior to this session, for whatever reason, we did make real good progress when we did have the majority.

“By the way that also rolls back to the immigration reform front. Right now the opposition to the security wants that. The immigrant population that comes in largely becomes a democratic vote over the course of time. That’s the mindset for entitlement programs and so on. Not everybody, but a large percentage. The other thing even if they’re not granted the right to vote, the immigrant population changes the number of house congressional seats. Remember every plus or minus 800,000 people is a congressman’s vote.

“Even the illegal population which is arguably between 12 to 15 million is at least 15 seats. Think of it that way because they are included in the census, that’s why this issue has continued to bubble up, they’re interrelated.”

A constituent suggested the Green New Deal be brought to a vote for recording the identities of the liberal Democrats who supported it and he recommended building additional nuclear power plants. – Fulcher answered: “You’re right, remember, fossil fuels would be eliminated in 12 years, airplane travel would be stopped, any existing structure if it’s taken literally, would be rebuilt or remodeled, and there would be no nuclear. My understanding is that even existing nuclear would need to go away. I did make the comment to a colleague that is supporting this, that he should remember the next time he is going into surgery, that he should be sure that his operating room only be operated by wind and solar. I think that Senator McConnell has said that they are going to take a vote on this. So they will be on the record on that particular issue.” 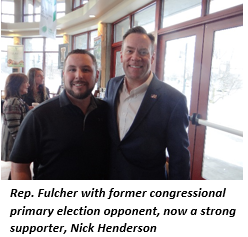 THE CULTURE OF CORRUPTION

He was also asked why a blue ribbon commission can’t be established to investigate the DOJ and FBI for incompetency and a culture of corruption. –  “As a representative with only seven weeks in, the overwhelming perception that I have, is that there is a lot of concern in particular about the FBI amongst the more conservative wing of Congress. So I will look into that. The other thing that I’ll be doing very soon is putting a congressional call to Mr. Mueller and the others that have generated these investigations and say ‘Look, you’ve had two years, put your charges on the table, put your evidence on the table or move on, because this is tearing everybody apart, inside and out.’  I will look into that and I have a long way to go. If you have insight on that bureau, because I don’t, or, if you know somebody, and I don’t, please contact me.

In closing Rep. Fulcher told everyone should their travels take them somewhere east to please pay him a visit.  He said it’s incredibly interesting at the capitol and a good visit.  He wrapped it up by saying “Again if you have questions or counsel, I’m way open to that.  Also know that, to the extent that I picked my crew, that is where their head and their heart is on service, because that’s what we’re there for. This is not a career.  It’s a service and it is a time. And you are appreciated. Love being here and I’ll be here again in a week or so for the Lincoln Day stuff.”