WE ARE IN THE MIDST OF A REVOLUTION

As Victor Davis Hanson said we are no longer in a country under the rule of law. We are in something like 17th century France. The Left is leading the Revolution.

The Left bases the revolution on the “noble ends justifies any means necessary” and their agenda is “radical equality, fairness, social justice,” not the rule of law, Professor Hanson says.

“Merrick Garland and Joe Biden are much to blame” and “it’s very scary because, I think most Americans realize, if you are of a certain political persuasion, and you break the law or are accused of breaking the law, you are going to be treated very differently.” 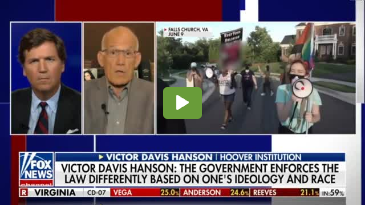 LEADERS OF THE REVOLUTION

The conflicts of interest in this appointment are stunning. It also clarifies who might be running the government. It certainly isn’t Joe Biden.

Donilon’s job is “to provide insights on the global economy, markets, geopolitics, and long-term asset allocation.”

He is going to make decisions about foreign policies and investments and will tell BlackRock where to put their money. Maybe, that’s incorrect. BlackRock will tell the White House what to do and where to invest. That sounds better.

Let’s not forget, that China will possibly have its say in this subtle takeover of the Biden White House. BlackRock and Donilon have a long history with the Chinese Communists.

Donilon’s wife, brother-in-law, and daughter are all in key positions in the White House.

Catherine Russell, formerly Jill Biden’s chief of staff during the Obama administration, is married to Tom Donilon, whose brother Mike is Biden’s chief adviser currently. Russell heads up the Presidential Personnel Office and picks all the hires.

CHINA WILL HAVE TOO MUCH TO SAY

Donilon is a long-time globalist and swamp creature who is a member of the globalist Council on Foreign Relations, the Aspen Strategy Group, and the Trilateral Commission.

BlackRock is fully involved with climate change, and all the Klaus Schwab World Economic Forum has to offer. Donilon would support ESG and a global currency, and The Great Reset. His ties to Maoist China also cannot go unnoticed. When it comes to lockdowns and World Health Organization power-mongering, you know which side he will pick.

The Biden administration’s pick to advise the State Department on “strategic competition” with Beijing chairs an investment think tank that urged Americans to triple their investments in China.

A serious conflict of interest:

Donilon’s work at BlackRock could pose a conflict of interest for the board, which provides “advice, feedback, and perspectives” to senior State Department officials on foreign policy matters. Under his leadership, the Investment Institute has urged investors to dramatically increase their stakes in Chinese companies. What’s more, BlackRock views “strategic competition” with China as bad for the company’s bottom line.

“Strategic competition between the U.S. and China and resulting tensions have also contributed to uncertainty in the geopolitical and regulatory landscapes,” reads BlackRock’s most recent annual report. The firm listed U.S.-Chinese competition as a factor that could hurt its revenue and profit. BlackRock opened a mutual fund in China in September, making it the first American firm approved to sell financial products there.

Even Soros Had a Problem with BlackRock:

BlackRock’s Chinese entanglements have raised concerns that the company is undermining the United States. The company has come under fire for investing in sanctioned Chinese companies, including surveillance giant Hikvision. Even progressive megadonor George Soros called BlackRock’s investments in China a “tragic mistake” that would damage U.S. national security interests.

Donilon has sided with China in the debate over tariffs imposed during the Trump administration. He chided government officials in 2019 about the tariffs and inaccurately warned that they would cause a global recession.

It’s obvious Joe Biden couldn’t run a dog kennel, much less the country. The real president of the United States is the cabal of globalists tied to Barack Obama and other far-left revolutionaries, including George Soros.

It’s our fundamental transformation, the revolution, with globalist Tom Donilon running foreign policy, and all of globalist Obama’s men and women running everything else.