New Vehicle Inventory, Stuck Near Record Lows, Gets Worse as Buyers Shift from Trucks to Economical Cars, which Vanish

New Vehicle Inventory, Stuck Near Record Lows, Gets Worse as Buyers Shift from Trucks to Economical Cars, which Vanish

Inventories of new vehicles at dealers are still desperately short, even as sales have plunged due to vehicle shortages. That has been a given now for over a year, and it hasn’t gotten better, and depending on who is talking, it might get a little better, or it might get worse, if that’s even possible.

The number of new vehicles in inventory on dealer lots remained at 1.13 million at the end of May, down by 70%, or by 2.68 million vehicles, from the same period in 2019, according to estimates by Cox Automotive, based on its Dealertrack data. In 2019, vehicle inventory averaged 3.66 million vehicles.

But now there is a new problem.

Gasoline prices that have doubled since the beginning of 2021 have pushed buying patterns away from the previously hottest and most profitable models – pickup trucks and full-size SUVs – that automakers had prioritized in their production plans as they struggled with semiconductor shortages and supply-chain chaos, to economical cars and compact SUVs.

And now dealers find that what little inventory they do have is the wrong inventory. Economical vehicles are now essentially gone. No one in the industry was prepared for this shift in buying patterns.

Supply fell to 34 days, remaining in the desperately low range, when 60 day is considered “healthy,” meaning fairly tight but sufficient, and 70-90 days is more common. In 2019, supply averaged 90 days.

The problem of the wrong inventory due to unexpected shifts in buying patterns, made worse by long supply-chain delays, has also hit clothing retailers and other retailers, that now find themselves short on some items and overstocked on other items, as consumer preferences had shifted in the meantime.

Inventories of compact cars, hybrids, and midsize cars, are essentially gone, with supply in the range of 18 days to 23 days. Note that “inventory” includes vehicles that are still in transit or are still waiting to be prepped. When you go to a dealer with a brand that still sells compact cars and mid-size cars – Ford and GM killed their models in recent years, and the import brands are loving it – you will essentially see none on the lot.

But inventories of full-size pickup trucks, mid-size pickup trucks, and full-size SUVs are starting to accumulate in inventory. These are the vehicles that automakers prioritized during the semiconductor shortage because of their big-fat profit margins, while they cut production of other models. Depending on brands, inventories of pickups still is very tight (Ford) to plentiful (Ram).

But Tesla is the elephant in the room in the US when it comes to EVs, and with its inventory and sales data not being disclosed, the majority of the EV business is not included in the data here.

Legacy automakers are now all coming out with their own EV models, but they’re all having problems making them due to the semiconductor shortage, and the time it takes to ramp up supply chains for entirely new models, even during normal times, and the number of EVs they’re selling remains small.

Many EV models have long waiting lists, and there is essentially zero inventory. But because sales are just an uneven trickle, the days’ supply data, which is based on that uneven trickle of sales without Tesla, can get erratic, and there is no significant buildup of EVs in inventories yet.

Very high-end vehicles, which are sold in just a trickle, are in a similar situation as EVs and show up with erratic supply numbers even though only few vehicles are in inventory, and few are sold. 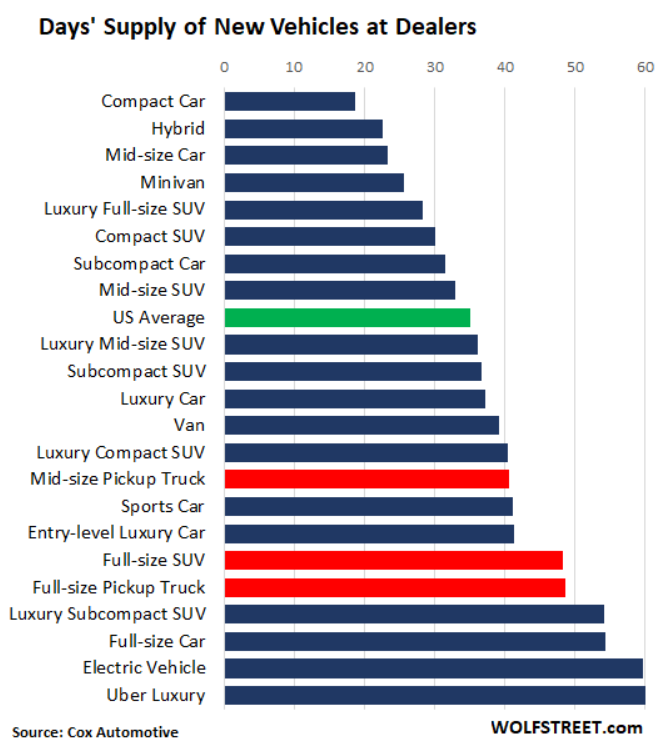 Given these inventory shortages, new vehicle deliveries in May plunged by 29.6% from May last year, and by 30.2% from May 2019, to just 1.1 million vehicles, back were it was in the 1970s and 1980s, according to data from the Bureau of Economic Analysis. Last spring was the last period when dealers still had inventory. Relatively strong sales in those months depleted that inventory. 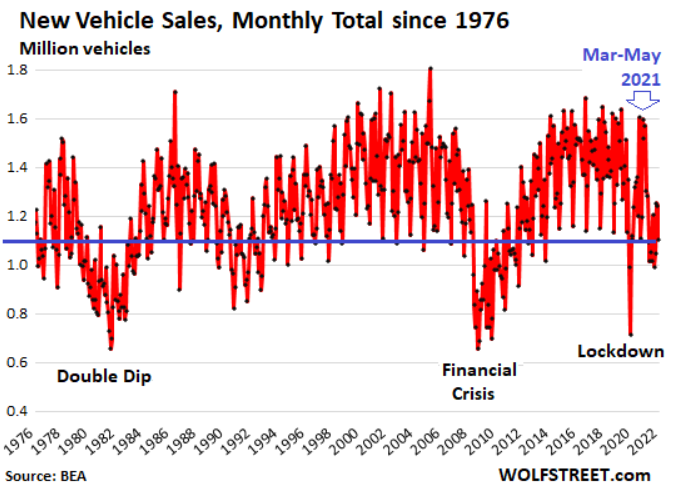 Given the inventory shortages, no one knows for sure what actual demand would be, if there were enough vehicles to sell, because for a year now, potential customers have left dealer lots frustrated because there was nothing to buy, or they ended up buying a used vehicle because that’s all there was, while others have put in orders and are patiently waiting for months to get their vehicle.

This market remains strangled by supply issues – and those issues have been made worse by the shift to more economical models, when no one in the industry was prepared for this shift.

The average listing price in May rose 12% from a year to $45,495: for non-luxury vehicles to $42,240; and for luxury vehicles, to $64,282, according to Cox Automotive data. The year-over-year increase in listing prices has been roughly in the 12% range since last summer, and roughly in line with the CPI for New Vehicles.

This means that the average new vehicle has gotten nearly $5,000 more expensive over the past 12 months, which is another indication that there is large demand amid complicated and shifting new vehicle shortages.

By now, there are several million frustrated potential customers who haven’t bought because there was nothing to buy; and there will be more of them by the end of 2022. These buyers will turn into pent-up demand when supply re-emerges. Some of them are already on waiting lists, with their orders pending. This isn’t a sign of low demand, but a sign of supply shortages. 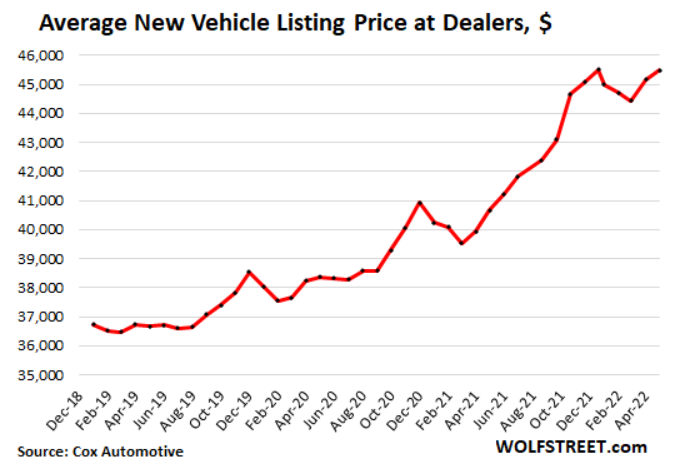