25 States Urge Biden To Rescind Fed Nominee Over ‘Radical’ Climate, Social Views – Idaho Is One of Them.  Washington & Montana Are Not!

25 States Urge Biden To Rescind Fed Nominee Over ‘Radical’ Climate, Social Views – Idaho Is One of Them.  Washington & Montana Are Not!

A large coalition of state financial officers announced their opposition to one of President Joe Biden’s top nominees for the Federal Reserve over her “radical” policy positions.

Sarah Bloom Raskin would put U.S. financial and economic stability at risk to achieve her “preferred social outcomes” if confirmed, the top financial officers of 25 states wrote to Biden in a letter Monday. Raskin, the former deputy secretary of the Treasury Department during the Obama administration, has taken particular aim at addressing climate change through aggressive financial policies.

“As State Treasurers, Auditors, and financial officers, we write to express our strong disapproval of Sarah Bloom Raskin as your choice for Vice-Chair for Supervision at the Federal Reserve Bank. We urge you to withdraw her nomination,” the letter stated.

“We, the undersigned, oppose Ms. Raskin’s radical banking and economic views and are deeply concerned that she would use the supervisory authority as Vice-Chair for Supervision at the Federal Reserve Bank to disrupt the private banking sector, reliable energy supplies, and the U.S. economy,” they added.

Biden nominated Raskin for vice chair for supervision of the Board of Governors of the Federal Reserve System on Jan. 14.

Raskin has previously advocated for allocating capital and portfolios towards “sustainable investments” and away from fossil fuel projects, the letter noted. In June, she argued in favor of penalties for banks that serve fossil fuel companies. 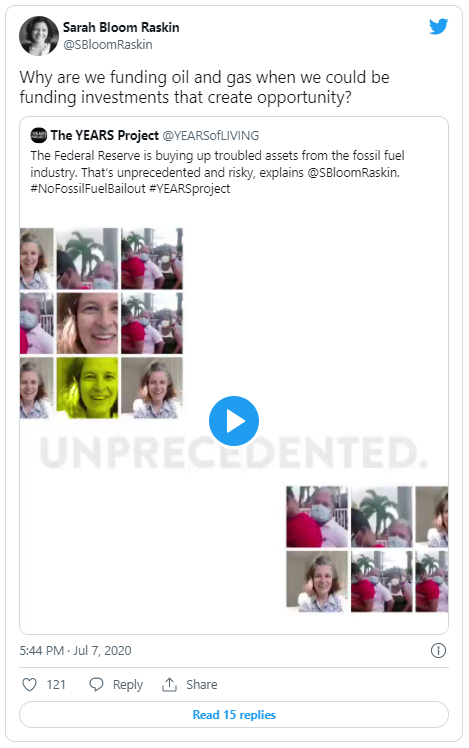 “Why are we funding oil and gas when we could be funding investments that create opportunity?” she tweeted in July 2020.

Raskin also suggested in September that financial regulators must “reimagine” the economy.

“Policies advocated by Ms. Raskin would place the U.S. reliable energy supply at risk,” the state financial officers argued in the letter.

“Ms. Raskin is the wrong choice at any time, but especially now when American families already are suffering from the hardship of policy-induced high energy prices,” Barrasso wrote in a letter Monday.

Raskin is set to appear before the Senate Banking Committee on Feb. 3 for her confirmation hearing.

The White House didn’t immediately respond to a request for comment.