We proved that was BS by searching for information on firearms and getting results that did not include any information from the National Rifle Association in the crucial first page of results.

Google now explains how their search results are ranked this way:

These ranking systems are made up of not one, but a whole series of algorithms. To give you the most useful information, Search algorithms look at many factors, including the words of your query, relevance and usability of pages, expertise of sources, and your location and settings. The weight applied to each factor varies depending on the nature of your query—for example, the freshness of the content plays a bigger role in answering queries about current news topics than it does about dictionary definitions. (Emphasis ours.)

So, who at Google gets to decide the level of expertise and credibility of sources?

During the meeting cited above Google claimed to “have a rigorous process that involves both live tests and thousands of trained external Search Quality Raters from around the world. These Quality Raters follow strict guidelines that define our goals for Search algorithms and are publicly available for anyone to see.”

We offer this review of our notes from that meeting because, once again, Google search results appear to be being manipulated to suppress information that is contrary to the regime-favored information, in this case Dr. Robert Malone’s articles about COVID and mass formation psychosis.

Editor’s Note: Dr. Malone is the inventor of the technology behind the mRNA vaccination as a technology, DNA vaccination, and multiple non-viral DNA and RNA/mRNA platform delivery technologies. He holds numerous fundamental domestic and foreign patents in the fields of gene delivery, delivery formulations, and vaccines: including for fundamental DNA and RNA/mRNA vaccine technologies. You can read some of Dr. Malone’s comments on mass formation psychosis in this article from the unbiased Epoch Times. 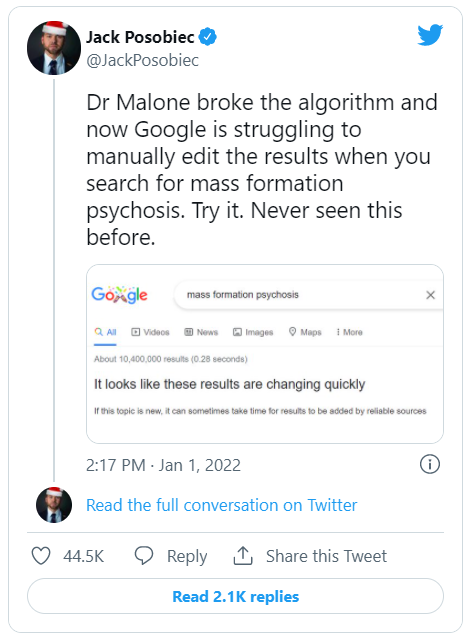 We tried it for ourselves and got a similar response on the top line: 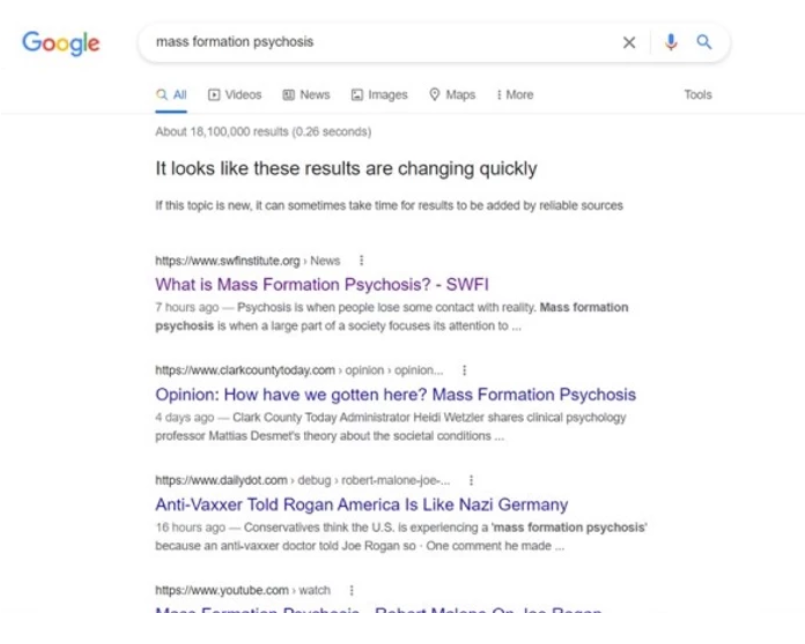 The Google message is particularly interesting because it appears to contradict everything Google claims about how its search results are derived:

If this topic is new, it can sometimes take time for results to be added by reliable sources

Mass formation psychosis isn’t a new term or concept – it has been studied for generations and there’s a huge body of scientific and medical literature going back to at least the post-World War II era.

So, the claim the topic is new is nonsense, but it is a good excuse for Far-Left twenty-something “Search Quality Raters” at Google to stall until they can find content to bury Dr. Malone’s articles or rebut them, or simply remove them from search results.

But what is even more nonsensical is the claim that “Google reflects the internet,” because Dr. Robert Malone’s interview with Joe Rogan is one of the most-watched podcasts ever.

And the link to the YouTube version of the Malone – Rogan interview you can barely see at the very bottom of the image has a header attacking Dr. Malone, even though there are many other YouTube posts of the interview with far more views than the one chosen.

This is just the latest proof that Google search results cannot be trusted because they present only regime-approved information, and that conservatives and truth-seekers everywhere should switch to an unbiased search engine, here are a few examples: 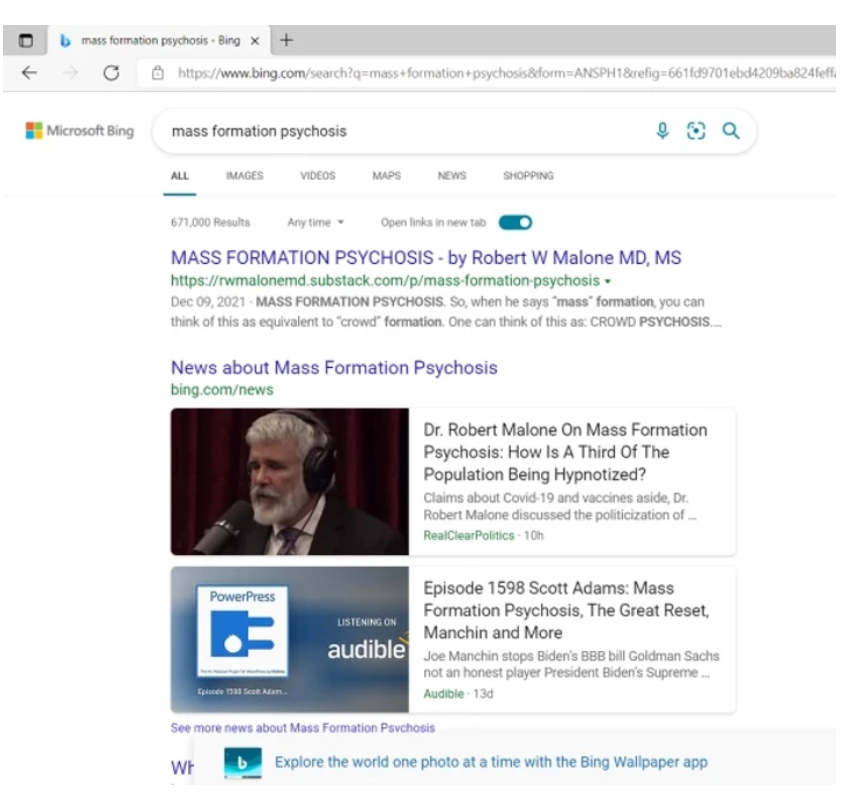 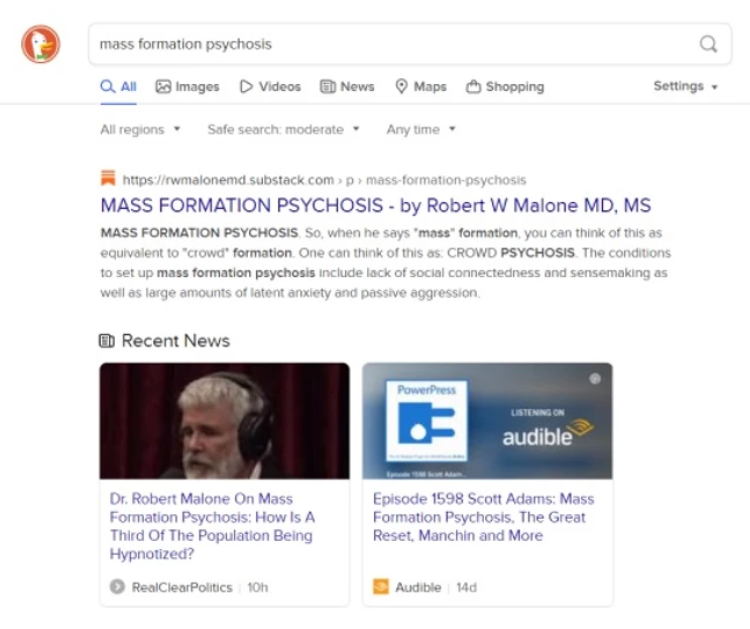 And even from AOL’s dinosaur search engine: 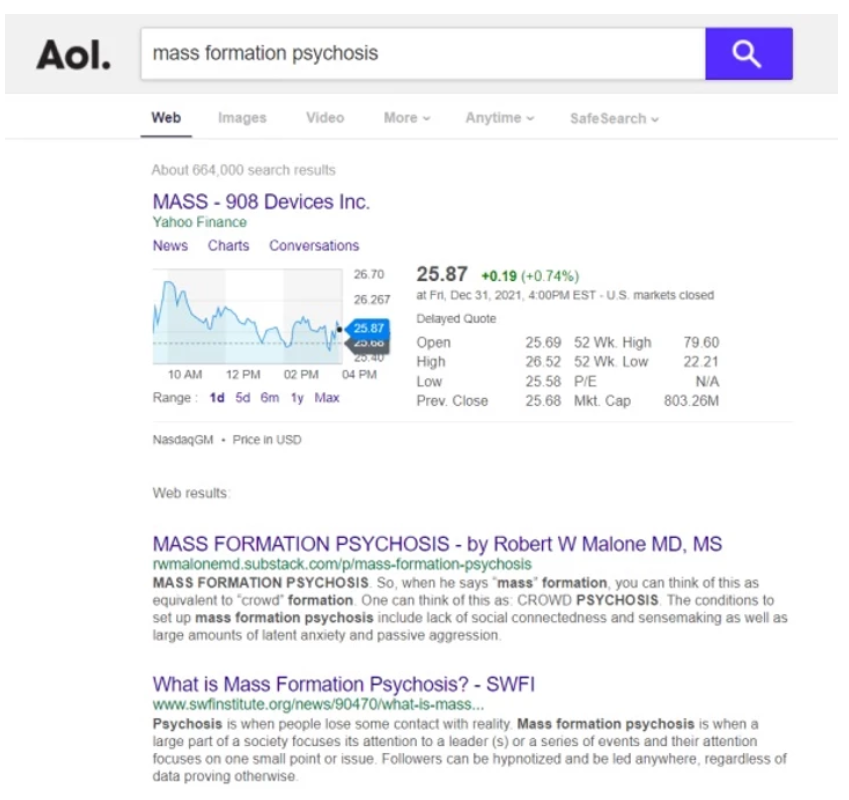