Forced Beliefs are Backfiring on the Left

Forced Beliefs are Backfiring on the Left

Dictating Private Thoughts: It is one thing to pass general laws against known evils, like Theft or Murder. Every successful culture has such a code. But when a decided minority attempts to codify and enforce their own personal morality, all hell is bound to break loose. Such forced internal beliefs, as opposed to a criminal code for conduct, is satanic and must be shattered.

Yet, the left further perverts justice by legalizing theft, but makes use of the wrong adjective a punishable crime. Moreover, the woke Mafia now goes after anyone it wants to, using the flimsiest evidence, nor matter how old, leading to firings, social rejection and banning across America. Since most citizens seem to hate wokeness, when will this stop?

But normal humans seek to obey criminal laws, yet choose their own private beliefs without compulsion. Those trying to force others to agree with their ideas used to be called tyrants or fascists. After all, the original American dream was to find a place to practice our own religion, without molestation. The Atlantic calls the left the New Puritans, while Art of Manliness describes, The Rise of Secular Religion and the New Puritanism.

Liberals have their own non-religious, “universally true” beliefs. Leftists refuse to accept disagreement, trying to destroy non-believers. So, what happens when such attempts backfire, creating more disagreement than existed before? This is called Reactance, when folks resist domination of their private thoughts and beliefs. Reactance is:

Broadly, reactance refers to the idea that people become upset when their freedom is threatened or eliminated, so much so that they attempt to reassert their lost freedom. The theory is relevant to the idea that humans are motivated to possess and preserve as many options and choices as possible. When people’s options are restricted, they experience aversive emotional consequences. Reactance is very similar to a layperson’s idea of reverse psychology: Humans will tend to do the opposite of what they are told to. Being ordered to do something by an external person or source implies that someone is trying to reduce one’s freedom. Reactance also refers to the idea that people will want something more if they are told they cannot have it. As a result, humans may act in a manner that will oppose a resistance presented to their freedom.

America is about Liberty. So, when folks come along who have no authority in our private lives and judge us, demanding we adopt their ideas, Americans typically get angry. But if the left really believed they were correct, they’d attempt to engage non-liberals in dialog to establish their theories and win us over. Instead, led by ruined crime family king Joe Biden, they have no confidence, intelligence, or art to win any debates. And so they misuse the law to force non believers to superficially acquiesce. We once fought a war over liberty. Let’s pray Democrats are not so stupid as to start another over our sacred right to choose our own beliefs, destiny, religion and God. 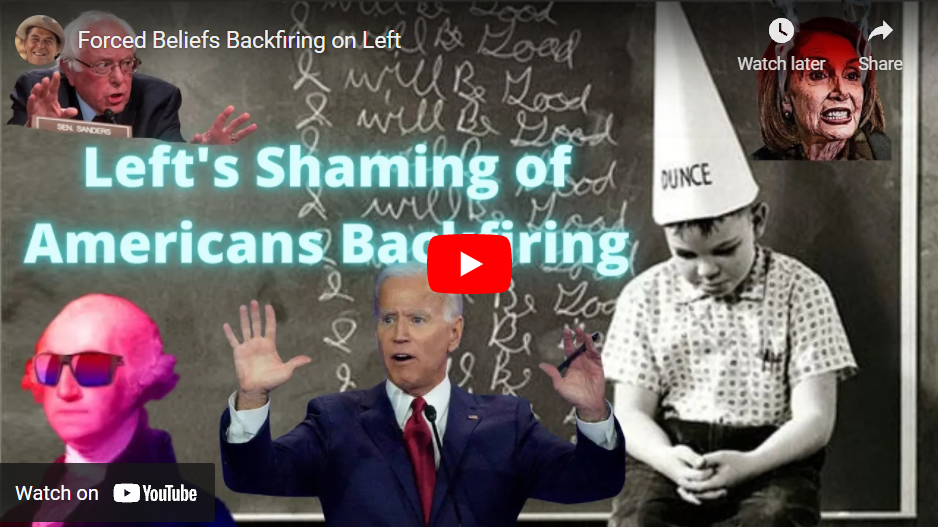