If we do not resist, in a generation the US will be just another failed, leftist state, totally opposed to religion, common sense, prosperity and freedom.

In recent days, Joe Biden’s desultory performance as leader of the free world led to widespread repudiation, precipitated by abandonment of Afghanistan. Strangely, as his own influence wanes, a disreputable cadre appears, aka his mentally challenged cabinet. They descend like a pack of mad, foam-lipped dogs tearing into the Constitution and our Rights, aided by various Democrat lackeys. 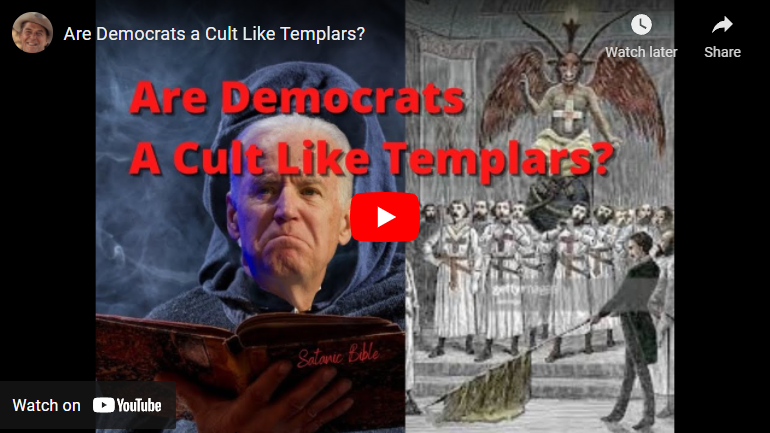 The sense of a burgeoning cult is undeniable, where American values are daily trampled and replaced by baffling degradations, and insults fly at any who resist. Biden is just an enfeebled pseudo-religion character, making Templar like devolutions into a non-Christian heresy, fortified by astounding greed for absolute power. Democrats are untroubled by this descent into madness, a ship of fools set off to find utopia, sailing into infamy and destruction.

Starting 1119 AD, after 300 pilgrims were killed by brigands and another 60 captured and held for ransom, French knights offered to defend European pilgrims to Jerusalem. Templars were named ‘Poor Fellow-Soldiers of Christ and of the Temple of Solomon.’ They slowly gained astonishing power and riches, evolving into bankers to the state. The Templars originally parlayed their prominence during the Crusades into great favor, receiving immense gifts.

But after losing Jerusalem, the Knights Templar suffered a precipitous, unparalleled fall. Their power was shattered after the King of France and the Catholic Church decided to destroy them to loot their staggering wealth. They sought dissolution and confiscation of what was essentially a highly influential multinational corporation, perhaps the first international bankers.

As Templar fame and wealth increased, a troubling rumor claimed their initiation and society lacked fidelity to Christ. At trial, the Templars were accused of rejecting the Trinity, abusing the cross and of rank homosexuality. Yet, some claim the Templars delved into Manichaeism, led by Cathar heresies—asserting a God of Light and a God of Dark, instead of the Christian Trinity. Most damning, some accepted Allah on a primal level, spurring a dark, mystical cult. Which accusations were true is unclear, and undoubtedly many were false, but Templars were accused, shattered by torture, some consigned to the flames, and their order outlawed and wealth confiscated.

The Democrats are now clearly a non-Christian cabal laboring to cancel America’s famous separation of powers, seeking unified tyranny of exclusive government authority on all matters. This is a centuries-long battle for control, described by Benjamin Wiker, in Worshipping the State: How Liberalism Became Our State Religion—“Thus liberalism is more than a political persuasion. It’s a religion with its own doctrines about cosmology and morality.”

As leftism overtakes America, we note its constant bedfellow—incompetence. And so, as the government grows like a malignant tumor, it can’t help screwing up everything it touches. Since leftism’s only interest is in aggregating power and authority, we understand efficiency and excellence are sacrificed to establish complete control.

Radical Liberalism is Manichean in that it claims to represent the exclusive good—whether fighting viruses, educating children, or engaging in world diplomacy. Contra, conservatives and critics represent everything bad, dark, evil. A very simplistic view but quite understandable. Most amazing, the federal government now operates as if good ideas—crafted by rogue policies and defended by punishments—are created by government dictate. Not God’s standards or human reason.

So, for instance, to demand all Americans be vaccinated is the only truth. Whether a person already has immunity, or maybe health issues—is irrelevant, because public policy creates a truth that all must mindlessly embrace, or be destroyed. And parents are incompetent regarding their children, because only the government knows the truth for children.

Again, when a US soldier criticizes the failed US withdrawal in Afghanistan, he becomes the only person punished in the matter. And importing millions of illegals from across the globe is good, regardless of any downsides, simply because the government says so, proved by their authority. So, the formula is: authority + power = good.

So what is the comparison between the ancient Templars and today’s Democrats? A once noble group becomes pervaded by arrogance, lust, greed, and fixation with power. They lose their way and then collapse in a sudden tumble. And yes, it can happen again. One can only hope that mass resistance will today arise against this dangerous, heretic and Anti-American form of leadership. On both the right and left. If we do not resist, in a generation the US will be just another failed, leftist state, totally opposed to religion, common sense, prosperity and freedom.