If they meant the NFL was happy, that would be one thing, though perhaps a fanciful claim given its ratings woes. But that’s certainly not what’s meant in an NFL ad that states, in part, “Football is Gay” — followed by “Football is lesbian.… Football is queer.… Football is transgender.” And football is…

(Oh, yeah, been there, done that. Remember China?)

The 30-second ad, which opens to the sounds of drums rolling and people cheering, also states “Football is for everyone.” We’d have to wonder, though, if that includes people who reject the agenda the NFL is elevating.

The commercial, wrote American Thinker’s Eric Utter yesterday, was released June 28 (“Pride Month”) and is “an embarrassing attempt to make further inroads into the LGBT community.”

“The ad is in part a direct response to Las Vegas Raiders defensive end Carl Nassib’s recent announcement that he is gay, a league spokesperson said,” Utter also informs. “It is titled ‘Football is for everyone’ and is intended to ‘send a strong message of acceptance from the league to fans and players,’ reports Outsports.”

The ad states during its first 20 seconds: 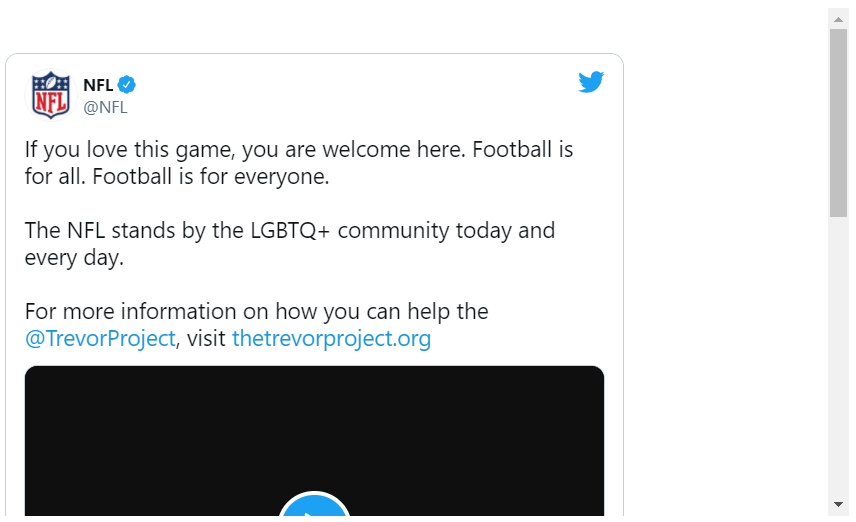 And football is losing money, viewers, and participants. Consequently, “‘Football’ is pandering,” laments Utter, after pointing out that you can substitute “NFL” for “football. “Football is pathetic. Football will say or do anything to chase down the very last potential viewer/customer,” he continues. “I’m surprised the ad didn’t also state, ‘Football is Chinese.’ (Maybe the NBA had already patented the last two words of that phrase.)”

Statistics and surveys bear out football’s problems. While the NFL’s ratings are a bit of a mixed bag, the downward trend of the last few years appears to be continuing. Why so?

After conducting a poll, SurveyMonkey.com released data showing that, not surprisingly, the NFL’s wading into contentious political/social issues — i.e., its kneeling controversy — has hurt it among the patriotically-minded. But here’s what may be surprising:

The issue has also hurt the league among those who support the kneeling. This is because some thus disposed want to “act in solidarity with the players (22%) and to support former quarterback, Colin Kaepernick, who’s being infamously shunned by teams across the league for kneeling (12%),” relates SurveyMonkey.

This was borne out anecdotally in the NFL ad’s Twitter responses. One of the first and most popular comments stated, reflecting a common sentiment, “Football is for everyone… except Kaepernick.”

My, my, it seems that trying to serve two masters isn’t the best idea.

SurveyMonkey also found that concerns about player health — head trauma, to be precise — were cited as a reason for refraining from watching the NFL by 10 percent of those polled. This concern was reflected on Twitter, too. “If the NFL wants to declare itself as more inclusive, that’s fine,” opined one respondent. “But tackle football causes brain damage to all who play. That’s the only thing that really matters.”

Then there’s the bigger picture. In times gone by, baseball, football, and boxing were the big American sports and had few competitors. The NBA then achieved prominence, there was the 1970s tennis boom, and golf gained popularity. Football remained a king throughout, however. But the sports market is today far more competitive, with the UFC and extreme sports also capturing people’s attention, and is thus harder to dominate.

Moreover, the demographic of people hailing from nations where American football is alien — places where soccer predominates (e.g., south of the border) — is ever increasing its United States population share. Simultaneously, the NFL’s main demographic, whites (77 percent of the audience), is shrinking both as a percentage of the population and in raw numbers, owing to immigration policy and low fertility rates. (Also note that the NFL’s largest age demographic is 55-plus, at 37 percent.)

Despite this, we should still wonder: Are these “woke” attempts to win new markets wise? Will sacrificing your soul and what makes you unique really win you more converts than the number of fans it alienates? If, for example, the NFL wanted to make inroads into the machismo-culture-oriented Hispanic demo (eight percent of the audience despite being 17 percent of the population), it perhaps should have retained its robustly masculine image.

Of course, it’s hard saying definitively “Get woke, go broke” insofar as long-term prospects go given Americans’ continuing left-wing indoctrination. Yet I suspect the NFL’s politically correct pandering is counterproductive, that the type of people it would appeal to may give the league a pat on the head, but aren’t inclined to watch regardless. As the top commenter under the NFL ad on YouTube put it, “I don’t [sic] think the NFL realizes who their audience [is].”

Returning to Utter’s utterances, he alludes to woke degradation and asks, “What will the league look like a few years from now?” While the question lends itself to some humor, the simple answer may be, “a lot smaller.”