By Editor of Big League Politics

Former vice president Mike Pence is on social media throwing pot shots at the Biden regime in a sorry attempt to get conservative Republicans to forget his crucial role in seizing the presidency on Biden’s behalf.

“The most disturbing development of the last 100 days has been the Biden administration’s whole-hearted embrace of the radical left’s all-encompassing, rapidly-escalating war on American traditional values,” Pence said in a tweet.

“They abolished the 1776 commission aimed at promoting patriotism in American education, they authorized teaching Critical Race Theory in federal agencies and public schools, and they restored Title 10 funding to Planned Parenthood,” he continued.

“We will reject Critical Race Theory in our schools and public institutions, and we will CANCEL Cancel Culture wherever it arises!” Pence added.

Pence’s tweets can be seen here: 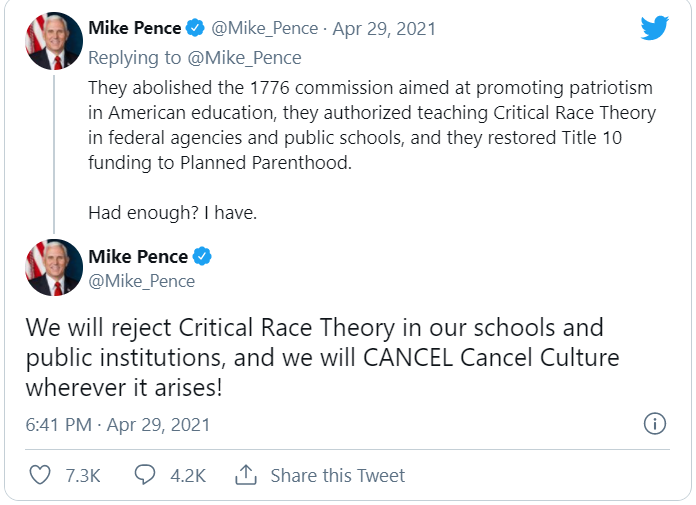 Big League Politics reported about Pence’s unwillingness to challenge election fraud and his final unforgivable betrayal of MAGA on Jan. 6:

“Mike Pence did not prevent Joe Biden’s swing state electors from being confirmed in a Joint Session of Congress on Wednesday, all but sealing an election victory for Joe Biden and defeat for President Donald Trump.

A statement written by the vice president and dated January 6 expressed his intention to do so.

“It is my considered judgment that my oath to support and defend the Constitution constrains me from claiming unilateral authority to determine which electoral votes should be counted and which should not,” Pence said.

Pence noted that he shared “the concerns of millions of Americans about the integrity of this election” and would ensure that “these concerns receive a fair and open hearing.” But ultimately he did not pull the trigger in the way his boss and millions of voters hoped he would. More than once Trump said that he would be “very disappointed” if Pence stood down.

In a statement released last night Trump called Mike Pence’s alleged comments reported by the New York Times “fake news.” But even if the president is right, the report still hinted at Pence’s intention to not prevent Biden’s electors from being confirmed, and so one should not be surprised to see this development.”

Millions of Trump supporters will never forgive or forget Pence for his craven behavior when his nation needed him the most. His presidential ambitions are dead on arrival.