I suppose I should be grateful for people like John Kerry and Gina McCarthy because their very words back up the premise of my book, The Weaponization of Weather in the Phony Climate War. For their words reveal this is not about climate, but about using climate as a means to an end, the end being the transformation of the very system that enabled our country to become the envy of the world.

It’s A Phony War when it comes to Climate, but it is not on a system designed for Life, Liberty and the Pursuit of Happiness

First of all, what is baffling to me is the media. In the 70s, the media was “trust nothing, question everything”. Now it’s the opposite. This makes little sense to me, since if everyone says the same thing, eventually only one source will be left. Look at what has happened since Trump left office. Ratings have fallen. Who are they supposed to attack? (although there are signs they will eat their own, inevitable when it becomes apparent its last outlet standing. Here is a hint, the media will be government controlled if not directly, then indirectly. If you want to mimic Marxism, you will wind up there). The few of us left speaking up are insignificant and are dismissed in general.

When I watched Gina McCarthy when she was EPA director testify in front of the Senate, I thought she had by mistake, let the cat out of the bag. I was not as alarmed as others when she did not know how much co2 was in the air ( though, it does always help to know where you are if you wish to get where you are going.. after all, what if you don’t have to go anywhere in the first place?) To put this in perspective you have to read this:

The video is a must see.

I think the highlight quote, among a slew of them that could be a greatest hits, was this:

“The value of this rule is not measured [by its climate impact]. It is measured by showing strong domestic action…”
-US House Science Committee
-July 9, 2015

But please take your pick when you read them all.

IOW. It is not about climate

Now this was back under the Obama administration. When I saw all this, read all this, I said okay that’s it, the cats out of the bag. This is all a big US economic suicide pact to set an example for the rest of the world. How does any one that loves our country, even with its faults, ( note: we never said we are a perfect union, but we would try to form a more perfect union) not pick up on this? It is evidence this is not about about science and climate change IN HER OWN WORDS.

Here we are and after 4 years of “Trump bashing” ( and anyone that agreed with him) for putting a pause on that agenda, and its back with a vengeance. And this time John Kerry is taking the lead.

This quote absolutely blew me away for the ignorance of what such a result would mean for life on the planet.

‘Even if we get to net zero, we still need to get carbon dioxide out of the atmosphere,’ Kerry said.

Let’s assume he misspoke. Why did he not walk it back? Why did no one listening to him question him on this inconvenient truth?

At 150 ppm million vegetation dies. ( it doesn’t do so well at higher levels until past 250 ppm and that is why co2 Is pumped into greenhouses, elevating their levels up to 1500 ppm. And no, its not the co2 that makes a greenhouse warm). Given the planet is now greener than ever in the satellite era, it means that whether you want to link the greening to the warming or co2, we are getting a Green New Deal, and that deal is better growing conditions. That feeds more people. At last look, word hunger and poverty was a heck of a lot more pressing problem than “climate change” which we are finding out this is not really about anyway. Ironic isn’t it, he advocates for taking away what is actually greening the planet. 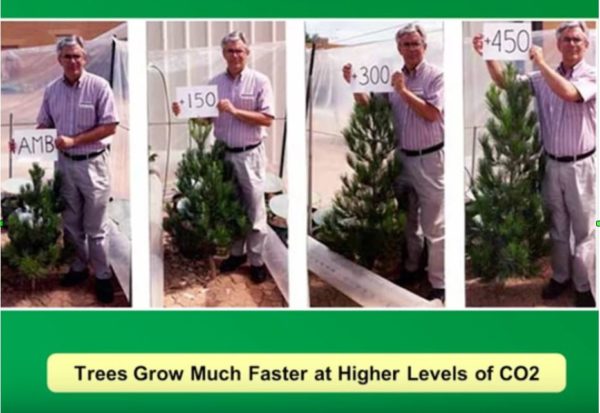 The snapshot above from a video found at this link speaks volumes.

So Kerry is advocating for getting Co2 out of the atmosphere, and no one says boo?

Or how about this:

‘The younger generation is today appropriately pretty upset at the adults, the alleged adults, who are not getting their act together,’ Kerry said.

Is he kidding? Life has never been better on planet earth. Kids are upset? About what, having the most comfortable conditions in the history of man in this nation because of the system they want torn down? Ironic isn’t it? We saw this age group in the 1980s and 1990s, lead to the downfall of the very system that age group in this country is advocating for, essentially communism, which resulted in a “utopia” that has killed all totaled a hundred million people. Perhaps these people should talk to people from the eastern bloc countries that made it to the U.S. and see what they think about what they are seeing in our country. But its about feelings over facts.

And since those kids have been indoctrinated into believing they are owed something, real or not, they are fair game to accept without questioning, statements like Kerry’s.

But the magnitude of the ignorance and arrogance is hard to believe. He apparently does not understand what co2 means to life on the planet. Does not understand that it makes plants more resistant to the very horrors he keeps trying to use to scare people into falling for with this agenda. As far as arrogance, it is that capitalistic way of life that made it possible for him to be who he is. Have the yacht he had. (sold in 2017).

Fly around in private planes. How about that 12 million dollar house? https://vineyardgazette.com/news/2017/03/09/john-kerry-buys-historic-marthas-vineyard-property

One may say, well it is because of his wife. Fine, but I didn’t see many Heinz ketchup empires in the old Soviet Union.

It is one thing after another. And I do not begrudge him his success. I do call into question a man who has these things, then seeks to destroy the system that made it possible for him, so others cannot attain it. In fact, it’s the same across the board with a lot of the non-science based spokespeople. They simply use this as an agenda, apparently unaware that what they seek to destroy what actually made it possible for them to be who they are. Can you imagine todays up and coming Bruce Springsteen trying to write about cars and the freedom to get in that car and drive wherever you want? I don’t think Mary in Thunder Road would want to climb into the smart Car Bruce pulled up in. (In fact it wouldn’t be Thunder Road since Thunderstorms in the climate change world are getting worse and must be cancelled)

Finally, this from CFACT’S Marc Morano

Which is my point precisely in writing my book. It’s a phony war. Not a lot of people really care. But that also enables them to run roughshod over it, because not a lot of people really cared. I tried to point that out to some of the leadership last year, that even though it’s only a small % that agree with the climate change missive, it is enough to tip an election for one and for two, it has always been a small group of committed zealots that have been able to pull off changes. And say what you want, they are committed and are zealots. So it is facts be dammed full speed ahead.

Saving the planet is way above my pay grade. And I have stated numerous times that it takes a virtuous and vigilant people to maintain the kind of freedoms we have. So there is nothing I can do to stop this and that is not my aim in pointing it out. It is to simply speak as a free person in a forum I am grateful for, to the issue being raised here. So I am grateful. But in the meantime, let’s take them at their word. For far too long people have been just thinking this less than what it is. But let’s call it what it is. A phony war on climate for a purpose that the words of leaders like John Kerry and Gina McCarthy make perfectly clear.

We Should Take Them At Their Words

Joe Bastardi is a pioneer in extreme weather and long-range forecasting. He is the author of “The Climate Chronicles: Inconvenient Revelations You Won’t Hear From Al Gore — and Others” which you can purchase at the CFACT bookstore.    His new book The Weaponization of Weather in the Phony Climate war can be found here. phonyclimatewar.com