A major reason the D-Day invasion of Normandy succeeded is that, by cleverly getting the Germans to accept misinformation, the Allies fooled them into sending resources to unnecessary areas. This is common in warfare. Lacking accurate knowledge can cause you to commit troops to fronts where there’s no danger at all while leaving places where you’ll be attacked vulnerable.

So it is in political and cultural wars, too — except that it’s even worse in a way. For it’s not just that people can’t possibly know what policies and politicians to support if they get misinformation about those policies and politicians. It’s that with actual warfare, the adversary’s failure to appear causes you to eventually realize your error, but you can expend resources fighting an imaginary enemy in political and cultural wars almost indefinitely — as long as deception is maintained.

Now let’s consider one of today’s major issues: the allegation that American lawmen are unjustly shooting large numbers of unarmed black men. To know if remedy is necessary, and what form it should take, we first need accurate information. Do Americans actually have this? Is the allegation true?

The rest of the study found similar results: Self-described liberals, for example, believe that a strong majority of people killed by police in 2019 were African-Americans. The actual percentage was less than half that, closer to 25%.

Moreover, know that cops not only shoot far more white than black suspects, but are also more likely to shoot them relative to the races’ different homicide rates and the rates at which they feloniously shoot police. Most Americans don’t know this, either.

“These are not small mistakes,” Carlson pointed out. “A lot of Americans are completely and utterly misinformed, and that has actual consequences. Public policy can change dramatically on the basis of things people think they know but don’t actually know.”

It has thus changed, too. The misinformation in question has inspired the defunding of police and other “reforms,” the election of certain politicians, the empowering of Black Lives Matter, and other outcomes.

Then there are the past year’s approximately 600 BLM-stoked, violent riots, resulting in deaths, thousands of destroyed businesses, and social upheaval.

Given this, “it’s worth finding out where the public is getting all this ‘disinformation,’” Carlson continued. “Is it QAnon? Marjorie Taylor Greene’s Twitter feed? The Kremlin? The Proud Boys? Alex Jones?”

“The answer is none of the above,” he then stated. “The answer is cable news and politicians talking on TV” (video below. Carlson also discusses other related issues). 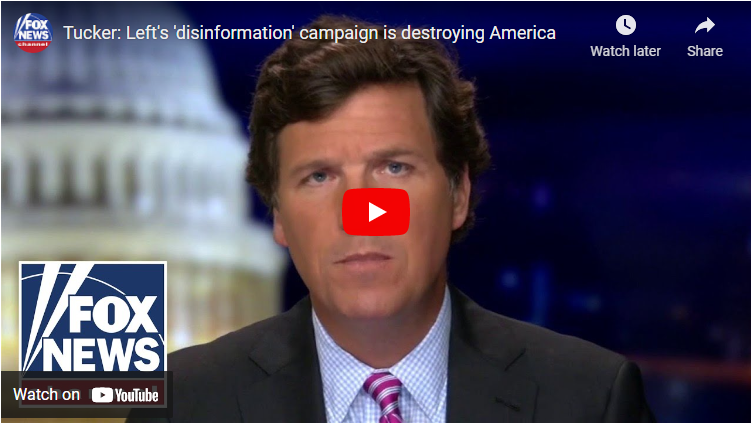 Truly damning about this is that relating the actual number of unarmed black men shot by police, 27, takes about two seconds. It’s also something that, indisputably, would have to be included in any honest, decent reporting on the issue. Yet it’s unheard from the mainstream media — obviously because airing it would kneecap their agenda.

Oh, they don’t actually say “1,000 unarmed black men are shot yearly by police.” What they do is focus inordinately on, and portray dishonestly, the rare cases in which it does happen and then use terms such as “genocide” to describe the phenomenon; or they may let politicians and activists spout such descriptions and not challenge them. This is gross malpractice — and it has sparked murder.

For the record, even the 27 number is deceptive, as it includes dangerous individuals who may at times use cars as weapons (trying to run down police officers). Moreover, as Professor Thomas Sowell pointed out in 2014, whether a person is armed or unarmed does not tell the tale in a police-suspect confrontation.

Unfortunately, far from being an outlier, the BLM misinformation is just one of perhaps hundreds of untruths spread via media malpractice. I outlined many others in my articles “10 Unfortunate Liberal Myths Conservatives Often Believe,” “Ten Liberal Lies People Believe about Guns,” and “The Equality Con: Why Income Gaps Don’t Matter.” But I’ll address just one more here.

There’s much controversy today over whether males claiming to be females should be allowed to compete in the latter’s sports. While a sound philosophical and scientific foundation alone would reveal the “transgender” agenda as flawed, simple facts do influence people.

For example, I’ve encountered boys who assumed the male-female athletics performance gap was “very slight,” as one put it. And people are generally surprised when I relate to them a reality epitomizing the actual gap: that in the 800-meter run, the record for 14-year-old boys is better than the women’s world record.

Their misconception is, of course, the result of decades of “girl power” propaganda. And don’t you think that people believing the intersex performance gap is rather “slight,” and those grasping its profoundness, may draw very different conclusions on the question of whether men claiming womanhood should be allowed to compete in women’s sports?

If the mainstream media actually told the truth, our policies and politicians, our very country itself, would be vastly different. For one thing, Joe Biden almost assuredly wouldn’t right now occupy the White House (he might be in the big house). For the electorate is as a computer: garbage in, garbage out.

Then again, if the people were different — if more cared about Truth — the media would be different. For the market has influence. All this is really saying is that people, whether in or outside the media or elsewhere, shape their civilization. And its shape can’t be better than they are.