Dr. Anthony Fauci, the country’s leading infectious disease bureaucrat, said today on State of the Union that we could have a “significant degree of normality beyond what the terrible burden that all of us have been through over the last year.”

He’s also guessing we might be wearing masks in 2022, but he failed to mention the 77% decrease in cases. Why? 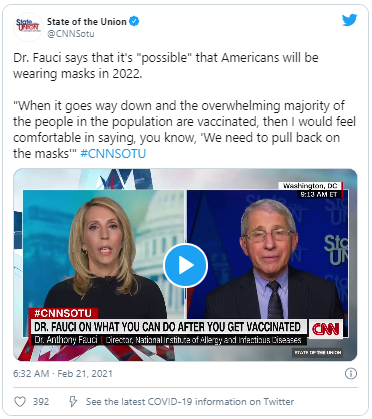 In a Wall Street Journal article, We’ll Have Herd Immunity by April, Dr. Marty Makary, a professor at the Johns Hopkins School of Medicine and Bloomberg School of Public Health, says there are encouraging signs of herd immunity.

The dire COVID warnings continue as Democrats exploit them in law and mandates, but what they don’t say is cases are down 77% over the past six weeks.

Why? Dr. Marty Markary says it is because “natural immunity from prior infection is far more common than can be measured by testing. Testing has been capturing only from 10% to 25% of infections, depending on when during the pandemic someone got the virus. Applying a time-weighted case capture average of 1 in 6.5 to the cumulative 28 million confirmed cases would mean about 55% of Americans have natural immunity.”

Add the numbers of people vaccinated, so far, 15% of Americans and the number is rising fast.

“There is reason to think the country is racing toward an extremely low level of infection. As more people have been infected, most of whom have mild or no symptoms, there are fewer Americans left to be infected. At the current trajectory, I expect Covid will be mostly gone by April, allowing Americans to resume normal life.”

Researchers at Sweden’s Karolinska Institute found that the percentage of people mounting a T-cell response after mild or asymptomatic Covid-19 infection consistently exceeded the percentage with detectable antibodies. T-cell immunity was even present in people who were exposed to infected family members but never developed symptoms. A group of U.K. scientists in September pointed out that the medical community may be under-appreciating the prevalence of immunity from activated T-cells.

Covid-19 deaths in the U.S. would also suggest much broader immunity than recognized. About 1 in 600 Americans has died of Covid-19, which translates to a population fatality rate of about 0.15%. The Covid-19 infection fatality rate is about 0.23%. These numbers indicate that roughly two-thirds of the U.S. population has had the infection.

That same trend is seen in Florida. Nonetheless, Joe Biden is threatening the state with economic sanctions over the alleged threat of the Great Britain strain. This is as Biden sticks with the ‘Gold Standard’ bearer Andrew Cuomo. 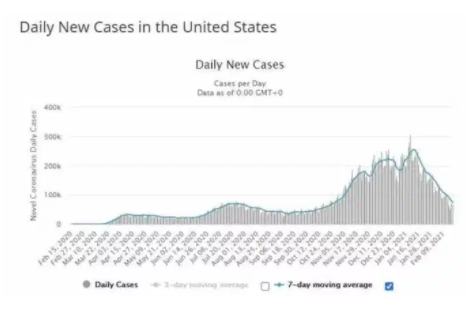 Dr. Makary is a professor at the Johns Hopkins School of Medicine and Bloomberg School of Public Health, chief medical adviser to Sesame Care, and author of “The Price We Pay.” 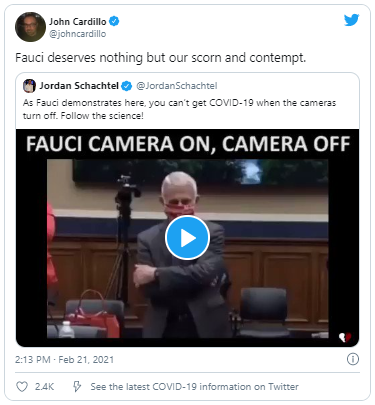