After first being panned as a conspiracy theory before gaining even some mainstream-media acceptance, the claim that the coronavirus originated in a Wuhan lab was recently “debunked” by a World Health Organization (WHO) investigation. That was the story, anyway. But a WHO advisor asserts that it’s a lie.

“‘And so, the WHO investigators were basically receiving reports from the Chinese officials,’ he told the Fox News Channel’s Laura Ingraham” (video below). 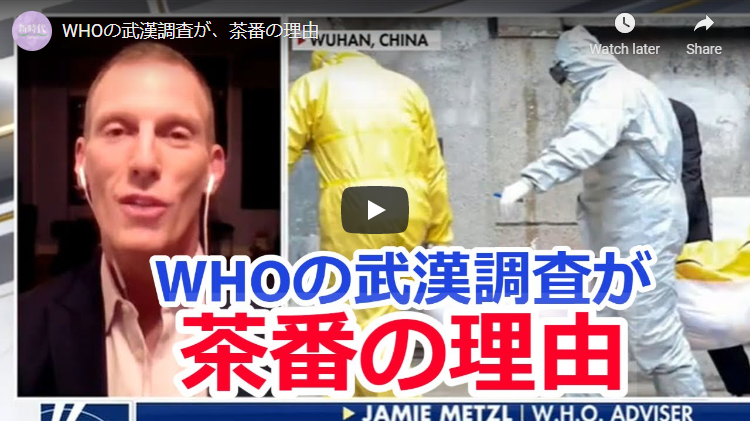 Metzl “was an official in the National Security Agency and the State Department during the Clinton administration,” WND relates. “Along with his WHO advisory role, he is a senior fellow at the Atlantic Council.”

As for WHO’s “findings,” the head of its “mission, Peter Ben Embarek, said Tuesday it was ‘extremely unlikely’ that the virus leaked from a lab in the Chinese city of Wuhan,” WND also informs. “The team suspects the virus originated in animals before spreading to humans but doesn’t know how.”

But Chinese fingerprints appear to be all over the WHO report. Just consider, reported The New American earlier today, additional revelations 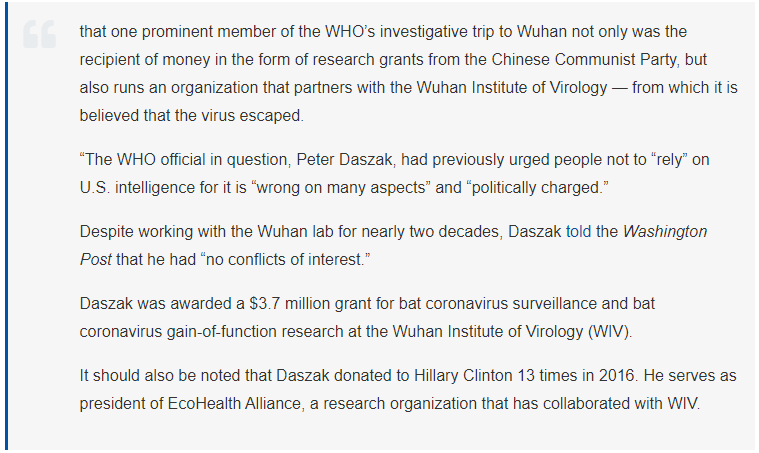 This explains why former secretary of state Mike Pompeo said in a Fox News interview Tuesday that “he believed WHO officials were acting in the best interests of China and that he was aware of ‘significant evidence’ that the global pandemic did in fact originate in a Wuhan laboratory,” reported the New York Post.

“‘I must say the reason we left the World Health Organization was because we came to believe that it was corrupted, it had been politicized. It was bending a knee to General Secretary Xi Jinping in China,’ Pompeo said of the Trump administration’s decision to withdraw from the UN body” (interview below), the paper continued.

Pompeo is not exaggerating. Remember that the WHO was pilloried last year for sharing Chinese propaganda claiming that COVID-19 could not be spread person-to-person (relevant tweet below).

Also indicting the organization’s credibility, the WHO pulled a Fauci (Fao Chi?) and was against mask-wearing before it was for it; a WHO official later questioned mask use again, yet the organization subsequently flip-flopped once more.

But WHO is hardly alone in China’s pocket. I reported Tuesday on how disloyal American pseudo-elites are purposely hurting the United States in order to benefit China — in return for money acquired via their Beijing connections.

In fact, “Nearly every major American industry has a stake in China,” wrote Tablet’s Lee Smith recently. This also appears true of globalist organizations. Consequently, these powerful entities now accept their own complicity in human-rights abuses, Beijing’s technology theft, and the rape of other nations and their workers as a “cost of doing business.”

And, apparently, they thus write off China’s diseasing of the whole world as well.

This is especially troubling since some claim that Beijing purposely infected the globe. As the theory goes, China knew about the SARS-CoV-2 issue by November 2019, yet elected to withhold the information from us until late January. The strategy?

Beijing would be weakened relative to its international competition if it issued a timely warning and suffered alone. So it instead decided to infect the world and hobble other nations economically so that China would emerge being stronger over the long term.

Given the fascistic Chinese regime’s nature, this theory isn’t just possible, but highly plausible. Nonetheless, Joe Biden has stated that with regard to Beijing policy we’ll now revert to “the international rules of the road.” This is also known as pandering to China and selling out our wealth, health, and future generations so that pseudo-elites can fatten themselves feasting on a listing America.