The “Dark Side” of social media: Big tech’s double standards

The “Dark Side” of social media: Big tech’s double standards

“I am altering the deal. Pray I don’t alter it any further.” – Darth Vader, Star Wars Episode V: The Empire Strikes Back

Social media and technology companies, known as “Big Tech”, have gained a bad reputation for arbitrarily enforcing their rules on content. Oftentimes these companies routinely single out those with a conservative or “right of center” viewpoint.

This has finally come to a head, as Twitter, Snapchat, Facebook, and Instagram (which is owned by Facebook) have banned President Trump from their platforms, in what was seen by many as a very political move.

The Twitter ban is permanent, while the other bans are supposedly “indefinite.”

It comes in the wake of the Capitol Hill protests and violence on January 6, 2021. Yet President Trump isn’t the only target of social media companies’ crackdown.

Apple, Google, and Amazon have gone even further. Apple and Google banned the social media app Parler from the Apple app store and the Google play store. Amazon in turn stopped providing the hosting services for Parler.com.

Parler has become popular as a conservative alternative to Twitter and has seen expansive growth over the last year in particular.

After the moves of Amazon, Apple, and Google, Parler has become inoperable. Apple and Amazon in particular said that those who committed violent acts on January 6 were using Parler to coordinate, and that Parler executives did not do enough to put a stop to it.

Parler says otherwise, saying they have a team of volunteer moderators that actively look for and remove content promoting violence.

Parler is now looking for another web hosting service to bring the site back online and has sued Amazon over their decision.

For conservatives and libertarians, these events raise tough questions.

For years, those on the Right have debated whether government action should be taken over the censorship by “Big Tech” companies.

It is a divisive issue, to say the least.

For those against government action, the argument has centered around three things: one, that there is no Constitutional right to social media; two, that if people do not like the policies of a private company, they are free to pursue or create other options; and three, that it would be a terrible idea to give government bureaucrats the power to decide what is acceptable content on social media.

Along this line of thinking, many have advocated for those unhappy with Twitter, Facebook, YouTube, etc., to start their own services, and to work within the free market to create alternatives.

Those more open to government action would say that conservatives and libertarians have tried to work through the free market and been shut out.

Of course, no site should allow for the planning or collaborating of illegal activity. Yet the standard being applied to these sites versus that applied to Twitter, Facebook, and other sites, some conservatives say, seems off balance.

On Twitter alone, Iran’s Ayatollah Khmanei, Chinese Communist propaganda accounts, and Venezuelan dictator Nicolas Maduro are all still active, while the President of the United States is banned.

The patience of more and more of those on the Right with these Big Tech companies is growing thin.

Senator Marco Rubio took to Twitter to say: “Even those who oppose Trump should see the danger of having a small & unelected group with the power to silence & erase anyone. And their actions will only stoke new grievances that will end up fueling the very thing they claim to be trying to prevent.”

Senator Lindsay Graham went even further: “Twitter may ban me for this but I willingly accept that fate: Your decision to permanently ban President Trump is a serious mistake. The Ayatollah can tweet, but Trump can’t. Says a lot about the people who run Twitter.

“I’m more determined than ever to strip Section 230 protections from Big Tech (Twitter) that let them be immune from lawsuits.

“Big Tech are the only companies in America that virtually have absolute immunity from being sued for their actions, and it’s only because Congress gave them that protection.

“It is now time for Congress to repeal Section 230 and put Big Tech on the same legal footing as every other company in America. Legal accountability.”

According to Business Insider: “Section 230 of the Communications Decency Act (CDA) is a part of US law that provides tech companies with two important protections. Firstly, it gives them the ability to decide how to moderate content on their own platforms. Secondly, it shields them from liability for what their users post.”

Only time will tell if Democrats and Republicans in Congress will hammer out some sort of compromise to reform or repeal Section 230.

Is it a needed reform? Or will such action only open a door to the “Dark Side” of more censorship and government intrusion? 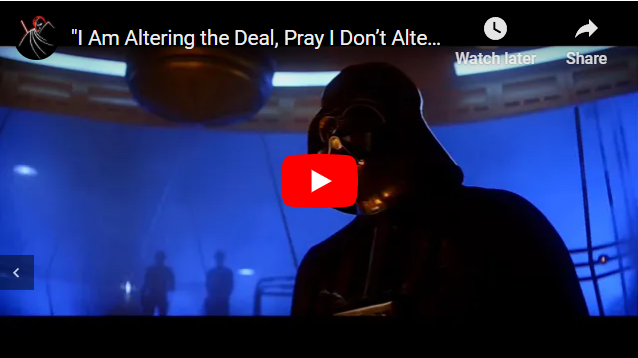