A meticulous new review published in the scientific journal, Energies, conducted by a team of Irish and US-based researchers including CERES researchers, raises surprising and unsettling questions about the feasibility and the environmental impacts of the transition to renewable energy sources. Concern for climate change has driven massive investment in new “green energy” policies intended to reduce greenhouse gas (GHG) emissions and other environmental impacts from the fossil fuel industry. The world spent US$3,660 billion on climate change projects over the eight-year period 2011–2018. A total of 55% of this sum was spent on solar and wind energy, while only 5% was spent on adapting to the impacts of extreme weather events. 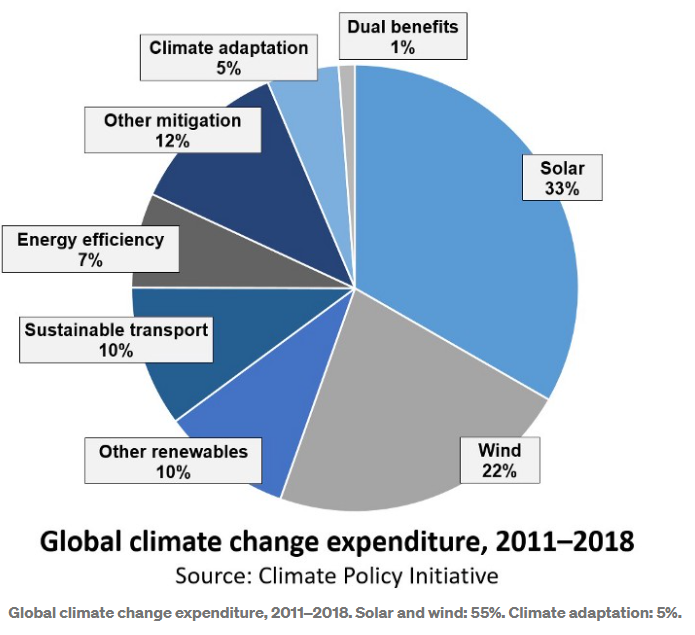 The researchers discovered that renewable energy sources sometimes contribute to problems they were designed to solve. For example, a series of international studies have found that both wind and solar farms are themselves causing local climate change. Wind farms increase the temperature of the soil beneath them, and this warming causes soil microbes to release more carbon dioxide. So, ironically, while wind energy might be partially reducing human “carbon emissions”, it is also increasing the “carbon emissions” from natural sources. 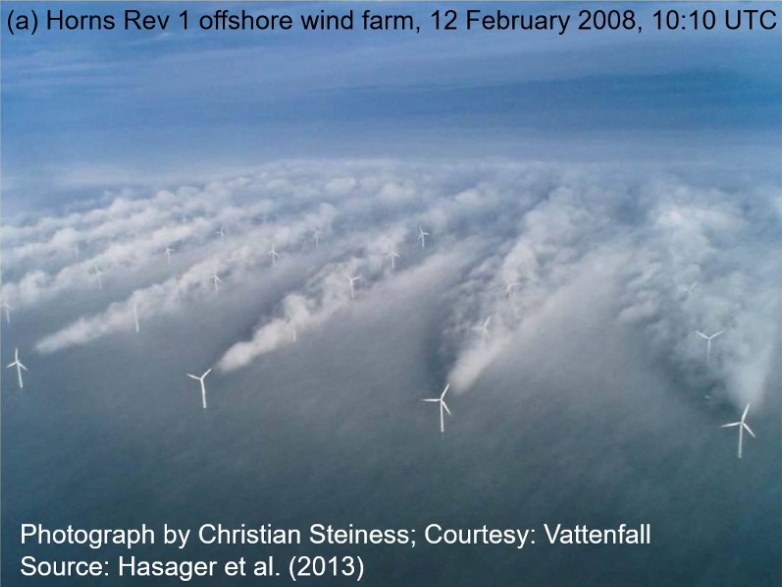 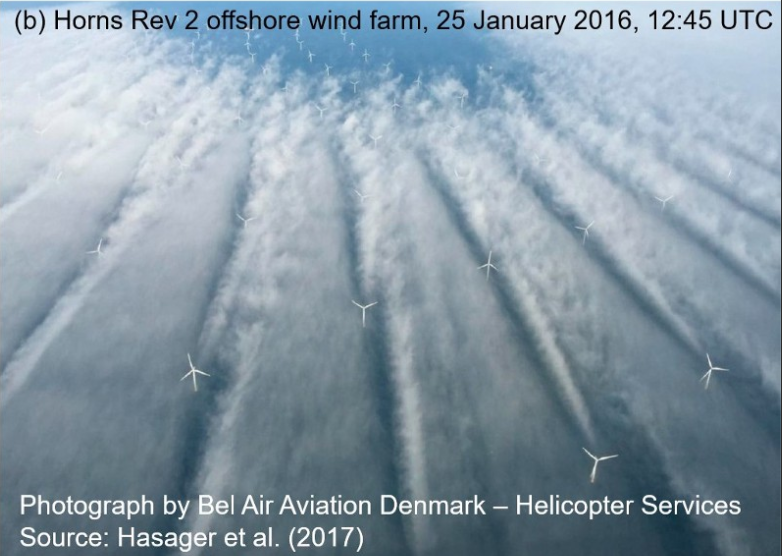 Surprisingly, more than half (55%) of all global climate expenditure in the years 2011‒2018 was spent on solar and wind energy ‒ a total of US$2,000 billion. Despite this, wind and solar energy still produced only 3% of world energy consumption in the year 2018, while the fossil fuels (oil, coal and gas) produced 85% between them. This raises pressing questions about what it would cost to make the transition to 100% renewable energies, as some researchers suggest.

“It cost the world $2 trillion to increase the share of energy generated by solar and wind from half a percent to three percent, and it took eight years to do it. What would it cost to increase that to 100%? And how long would it take?” 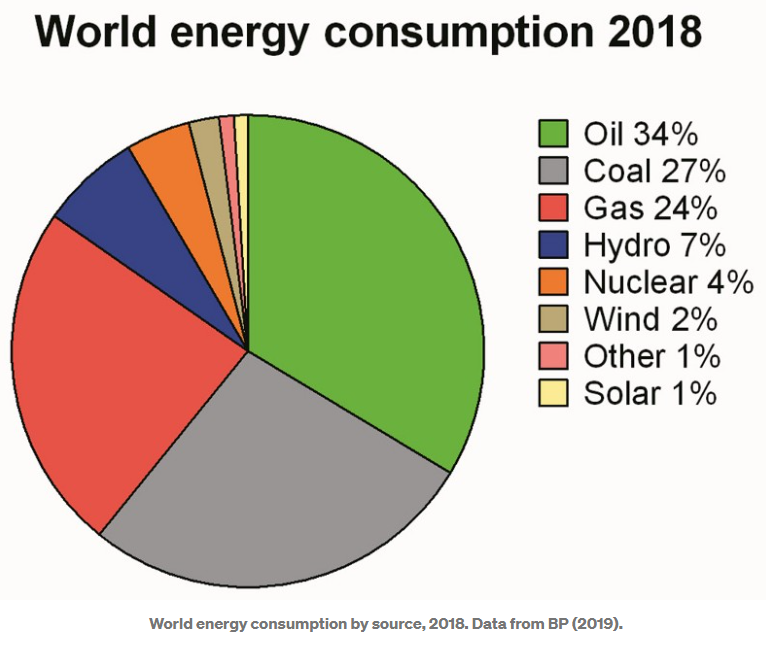 Engineers have always known that large solar and wind farms are plagued by the so-called “intermittency problem”. Unlike conventional electricity generation sources which provide continuous and reliable energy 24/7 on demand, wind and solar farms only produce electricity when there is wind or sunlight.

Dr Ronan Connolly, co-author of the new review, points out:

“The average household expects their fridges and freezers to run continuously and to be able to turn on and off the lights on demand. Wind and solar promoters need to start admitting that they are not capable of providing this type of continuous and on-demand electricity supply on a national scale that modern societies are used to,”

The problem is not easily solved by large-scale battery storage because it would require huge batteries covering many hectares of land. Tesla has built a large battery to stabilize the grid in South Australia. It has a capacity of 100 MW/129 MWh and covers a hectare of land. One of the papers reviewed in this new study estimated that, if the state of Alberta, Canada, were to switch from coal to renewable energy, using natural gas and battery storage as back-up, it would require 100 of these large batteries to meet peak demand.

Some researchers have suggested that the variations in energy production can be evened out by building continental electricity transmission networks, e.g., a network connecting wind farms in north-west Europe with solar farms in the south-east, but this requires massive investment. It is likely to create bottlenecks where the capacity of inter-connections is insufficient, and does not do away with the underlying vulnerability to lulls in sun and wind that can last for days on end.

A series of studies from Europe, the U.S. and China shows that carbon taxes tend to lay the greatest burden on the poorest households and rural-dwellers.

Although the primary motivation for green energy policies is concern over climate change, only 5% of climate expenditure has been dedicated to climate adaptation. Climate adaptation includes helping developing countries to better respond to extreme weather events such as hurricanes. The need to build climate adaptation infrastructure and emergency response systems may conflict with the need to reduce greenhouse gas emissions, because fossil fuels are generally the most readily available source of cheap energy for development.

With regards to indigenous peoples, the review highlights the fact that all energy technologies can have severe impacts on local communities, particularly if they are not properly consulted. Cobalt mining, required to make batteries for e-vehicles, has severe impacts on the health of women and children in mining communities, where the mining is often done in unregulated, small-scale, “artisanal” mines. Lithium extraction, also required for manufacturing batteries for e-vehicles, requires large quantities of water, and can cause pollution and shortages of fresh water for local communities.

“There was worldwide coverage of the conflict between the Standing Rock Sioux Tribe and the Dakota Access Pipeline, but what about the impacts of cobalt mining on indigenous peoples in the Democratic Republic of the Congo, and what about the impacts of lithium extraction on the peoples of the Atacama Desert? Remember the slogan they chanted at Standing Rock? Mni Wiconi! Water is life! Well, that applies whether you’re Standing Rock Sioux worried about an oil spill polluting the river, or you’re in the Atacama Desert worried about lithium mining polluting your groundwater.”

Overview of the paper

The review, published in a Special Issue of the journal Energies on 16 September, covers 39 pages, with 14 full-color figures and two tables, detailing the breakdown of climate change expenditure and the pros and cons of all of the various options: wind, solar, hydro, nuclear, fossil fuels, bioenergy, tidal and geothermal. For the review, the researchers searched meticulously through hundreds of research papers published throughout the whole of the English-speaking world, in a wide range of fields, including engineering, environment, energy and climate policy. The final report includes references to 255 research papers covering all of these fields, and it concludes with a table summarizing the pros and cons of all of the various energy technologies. Research team members were based in the Republic of Ireland, Northern Ireland, and the United States.

Funding: C.Ó., G.Q., and M.C. received no external funding for works on this paper. R.C. and W.S. received financial support from the Center for Environmental Research and Earth Sciences (CERES), while carrying out the research for this paper. The aim of CERES is to promote open-minded and independent scientific inquiry. For this reason, donors to CERES are strictly required not to attempt to influence either the research directions or the findings of CERES. Readers interested in supporting CERES can find details at https://ceres-science.com/ .