Dr. Anthony Fauci recommended against average Americans wearing masks earlier this year, during the COVID-19 pandemic’s peak, saying they weren’t that effective. He then changed his tune, essentially saying his initial counsel was insincere. Now Fauci not only thinks everyone should be wearing a mask, but that doing so should be imposed nationwide.

Fauci, a 52-year bureaucrat and longtime head of the National Institute of Allergy and Infectious Diseases (NIAID), made his comments Friday while speaking to CNN’s Erin Burnett. Interestingly, though, while CNN’s later reporting on Fauci’s remarks held that he was now calling for a “federal law,” this is not what he actually said.

Oh, it’s not that Fauci wouldn’t likely reckon such a measure favorably. This is the man, after all, who in April took a positive view of issuing Americans “coronavirus immunity cards.” But not only is the doctor a bureaucrat with a politician’s soul who’s careful not to jeopardize his position, but host Burnett didn’t actually ask about a federal law.

What she did was play a recent clip of Joe Biden saying that, as commander in chief, he’d approach the governors and urge them to institute mask mandates; if they refused, the Democratic presidential nominee continued, he’d then go to local and county officials and implore them to take action.

To this clip and Burnett’s related questions, Fauci responded, “There’s going to be a difficulty enforcing it. But if everyone agrees that this is something that’s important and they mandated it, everybody pulls together and says, ‘You know, we’re going to mandate it but let’s just do it,’ I think that would be a great idea to have everybody do it uniformly.”

So “if people are not wearing masks,” Fauci concluded moments later, “then maybe we should be mandating it” (video below. Relevant portion begins at 3:49). 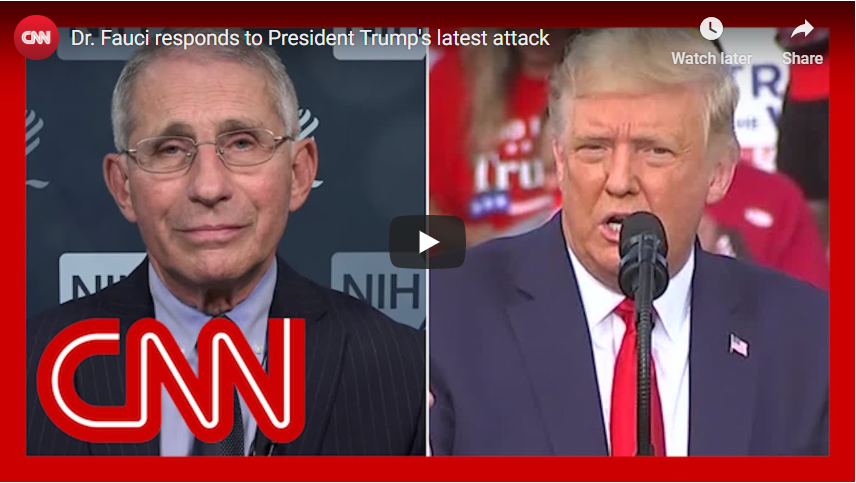 As for CNN’s later claim that the doctor called for a federal law, perhaps this is wishful thinking. Or maybe the station was reading Fauci’s heart and mind, and such a divination certainly wouldn’t be fanciful. More likely it was sloppy reporting in which the writers’ own statist assumptions influenced their interpretation.

But more damaging is the deceptive and deceitful reporting underlying this whole issue. First, Burnett in her interview lent the illusion — which Fauci happily capitalized upon — that the doctor has been a prudent, steady hand issuing sage counsel and sober warnings that went unheeded by the dastardly Donald Trump.

In reality, on January 21 and February 29, Fauci said the virus was not a major threat and that Americans didn’t have to change their behavior; moreover, he then claimed in an Easter Sunday interview that he’d advised the government to impose social-distancing measures in February. So he was either lying then or lying on February 29.

This flip-flop and more are revealed in my recent exposé, “The Many Masks of Anthony Fauci.”

Last Thursday, premier Australian media organ News.com.au ran the headline, “Swedish approach to fighting COVID-19 takes a turn as cases spike.” (Sweden has been assailed by the powers-that-be for not locking down.) The jubilant subtitle read, “Coronavirus cases have doubled in Sweden in just three weeks as the wheels fall off the country’s vaunted approach to tackling COVID-19.” Ominous, huh?

The reality, however, is revealed by up-to-date World Health Organization (WHO) data. Examine the graphs the entity provides on Sweden below. 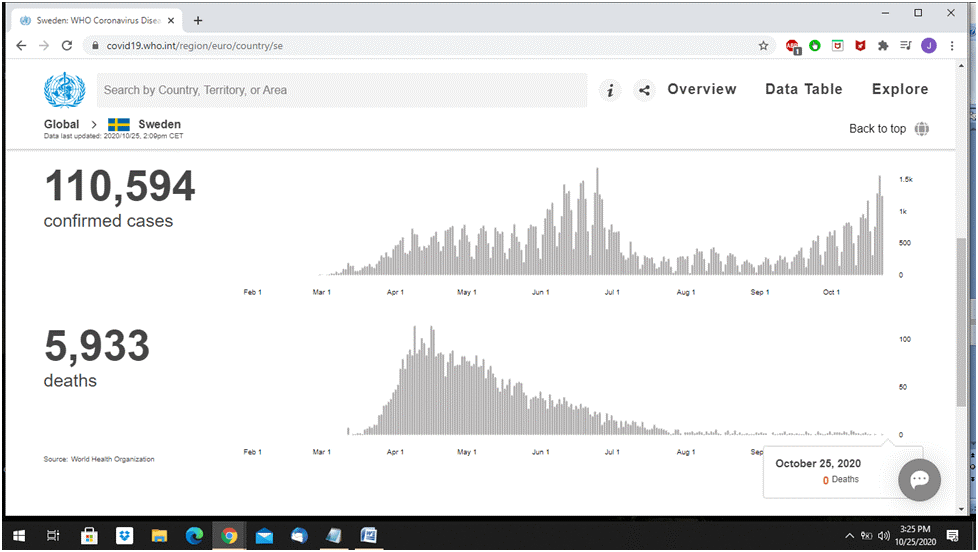 You’ll note that Sweden’s positive-case number did spike upwards beginning mid-September and has continued rising. So the media touting that are telling the truth — just not close to the whole truth.

As the second graph shows, the number of China virus deaths has remained constant, not spiking one iota, since July 31. Sweden had zero deaths Sunday and zero on Saturday. In fact, the week beginning Oct. 19 was the nation’s best since the “pandemic” began, with only two COVID deaths recorded (weekly charts below). 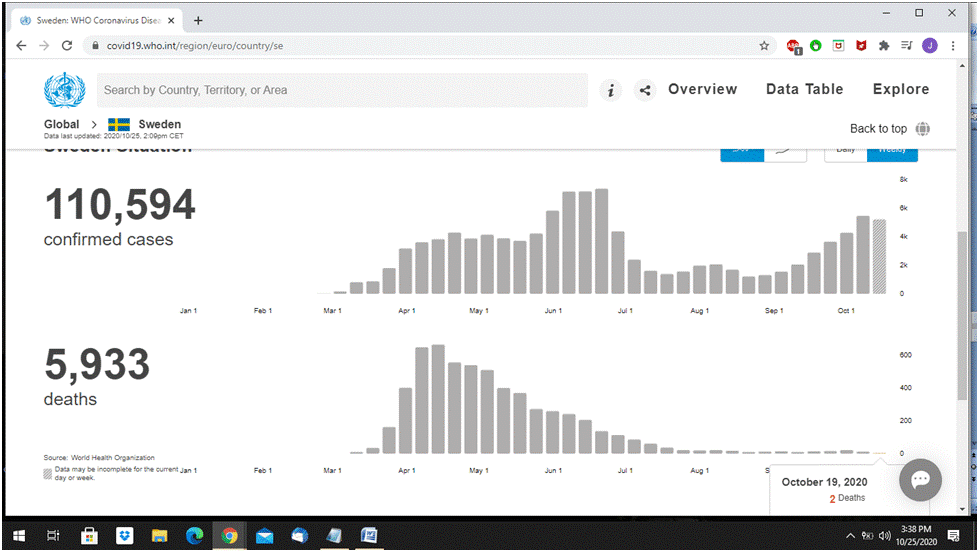 If you’d ask, “Why worry about increased ‘infections’ if the death numbers remain low and constant?” go to the head of the class. All Americans become infected with cold viruses (also in the corona category), and the WHO informs that 67 percent of people worldwide carry herpes simplex type 1, the “cold sore” virus. Yet we don’t worry about this because it’s health and life that matter, not whether our bodies carry microorganisms. That’s normal.

Patterns similar to Sweden’s have emerged in other European nations as well. The difference is that many embracing lockdowns have recently seen a mortality increase. Below are Britain’s charts. 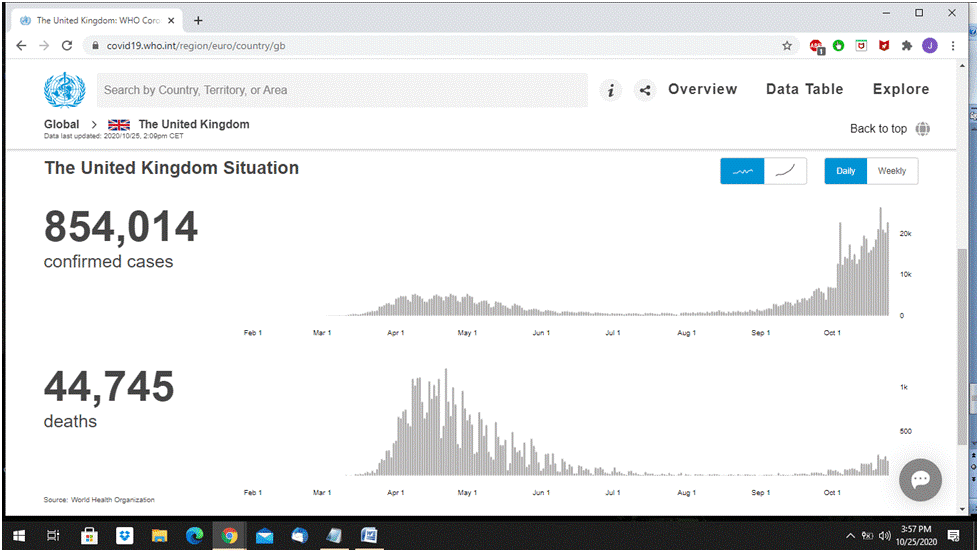 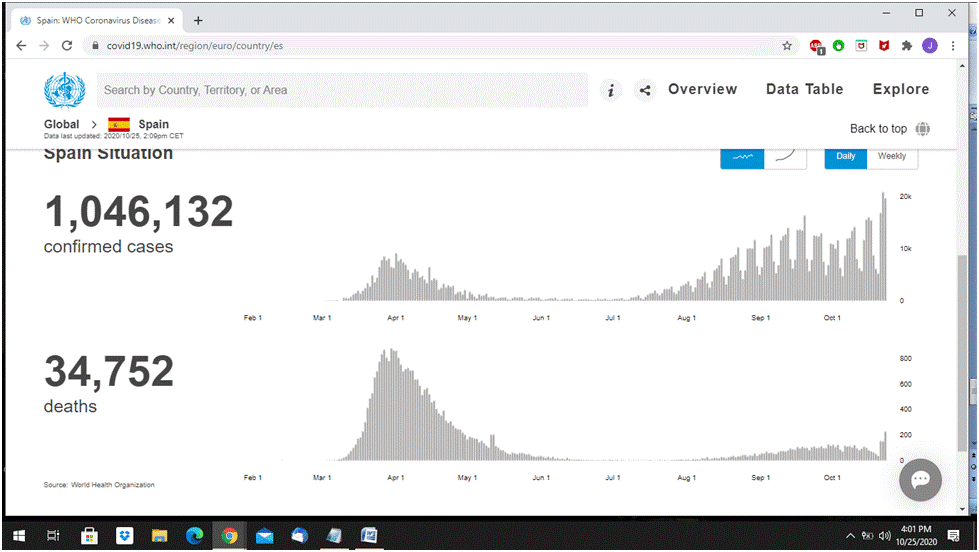 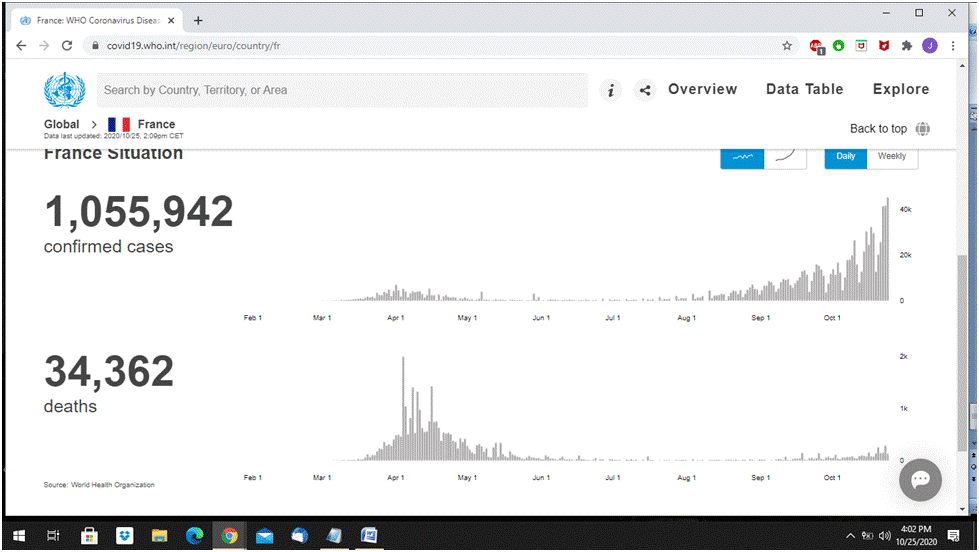 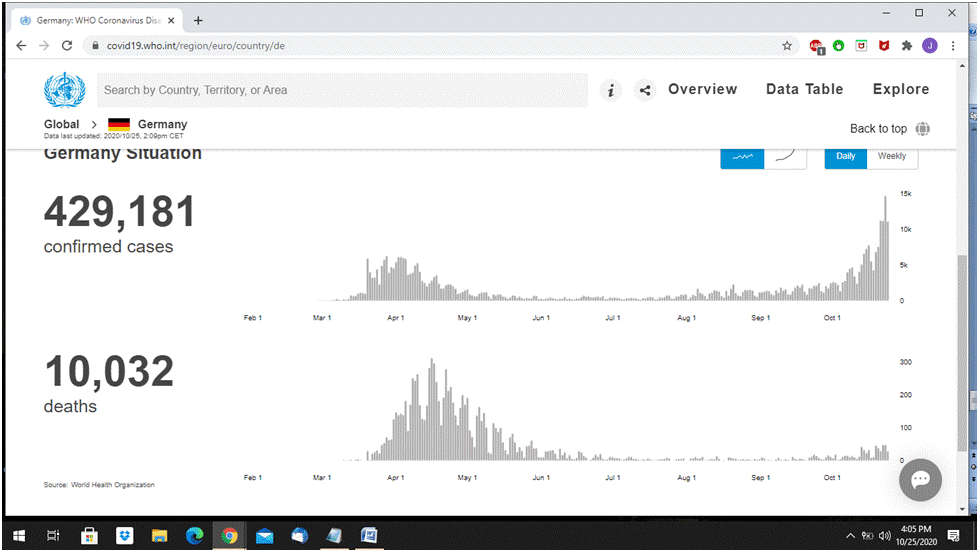 Note here that when “positives” spike, it could be because more people are contracting the virus or because of increased testing. When mortality remains low despite this, it could be because of better treatment methods; because the China virus has “weakened,” as some theorize; because the vulnerable have either already been claimed by it or are now being better protected; or because of a combination of these factors. The mainstream media are remarkably incurious about such details, though.

Of course, what prompted Fauci’s Friday prescriptions was “concern” about recent “spikes” in the United States, whose WHO graphs are below. 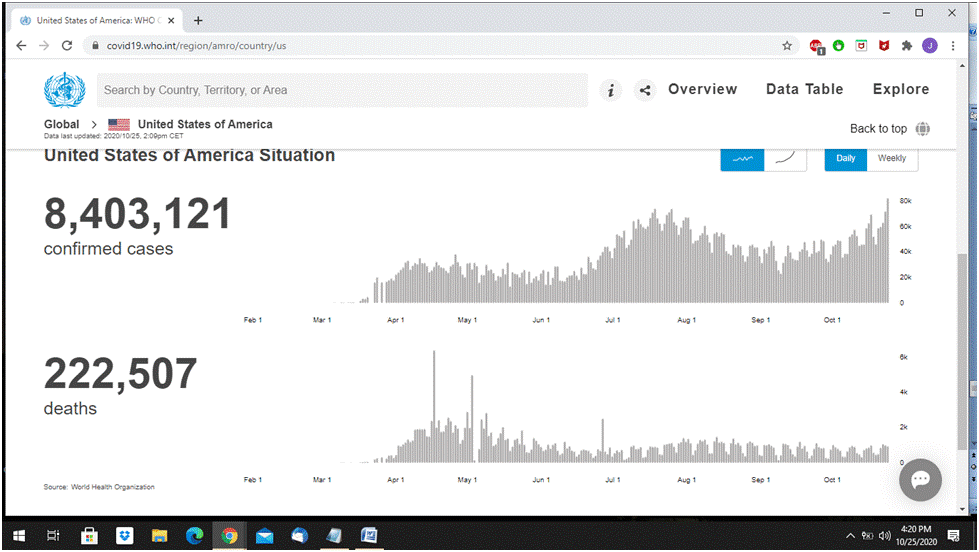 It’s apparent that the mortality numbers have remained relatively constant since at least early September and aren’t currently increasing correspondingly to the positivity numbers.

Of course, the 943 deaths recorded Sunday still constitute a significant number and are tragic for loved ones left behind. Note, however, that there’s ample evidence our China virus numbers are exaggerated, so we can’t take them at face value.

The survival rate for those 70 and older is lower: 94.6 percent. Of course, though, this includes people aged 100 and beyond and elderly with multiple comorbidities. And this just underlines how this group — nursing home residents in particular, who’ve constituted 40 to 50 percent of our deaths — should be our focus.

Instead, the world’s Faucis have visited deadly lockdowns on us and would force everyone to wear what too often becomes, in essence, a Petri dish on your face.  As to the latter, some experts caution that masks are, at best, minimally effective at preventing China virus contraction (Fauci thus opined earlier this year); others warn that wearing them is actually dangerous.

But one thing is for sure: In a time of waning faith, COVID Ritual makes people feel more secure. It’s also hoped by demagogues that by promising health security, they can seize power November 3 and liberty afterwards.