Could it have crossed your mind that a former CIA director would promote an American presidential candidate with a popular song about a world without America?

People doing interviews always ask me what went wrong, how did America get in this terrible condition? Generally, the question seems to assume that America is falling apart all of a sudden. There is no doubt that America’s crack-up is picking up speed, accelerating at a truly frightening rate, but the important point is that the crack-up has been in the works for a long time.

Take, for example, John Brennan. This year he is for Joe Biden; in 1976, he voted for Gus Hall, the Communist Party USA’s presidential candidate. In 1980—in his master’s thesis at the University of Texas, Austin—Brennan denied the existence of “absolute human rights” and argued that censorship by the government was sometimes in order. Then he was promptly hired by the CIA!

Evidently, he was the sort of person for whom that agency was then looking, because he rose rapidly through the ranks, eventually becoming Obama’s choice to be the director of the CIA and, it is increasingly clear, a key figure in the Obama-Hillary nefarious coup plot against President Trump.

Before you learned that the CIA had hired Brennan, did you ever imagine in your wildest dreams that the CIA would hire an avowed anti-American? After all, Brennan had taken a stand against the First Amendment and against America by voting for Gus Hall before they hired him. Perhaps you might believe it possible of today’s CIA because we now know it is corrupted beyond repair, but the significant fact is that the CIA hired Brennan in 1980. That means the CIA had already begun to deteriorate. As a result, the perfect man to head Obama’s CIA was ready at hand in the CIA when Obama needed him. That speaks volumes about the CIA. 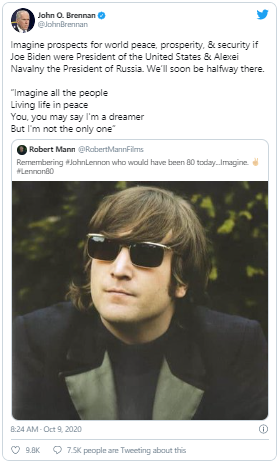 Now, in 2020, Brennan is promoting Biden by referencing John Lennon’s song “Imagine.” That it might be a clever move politically speaks volumes about what has been happening in America outside the CIA. “Imagine” has become the post-American trans-national Anthem. Played every New Year’s Eve at the Times Square celebration, it celebrates a post-American world:

It isn’t hard to do

Nothing to kill or die for

And no religion too

Thinking of “Imagine” as the anthem of the globalist elite will take you far. The globalist elite, in America and abroad, is dedicated to a vision of a post-American world. Their project is to achieve that world by progressively diminishing American national sovereignty and progressively transferring political power to international institutions like the United Nations, the European Union, the World Health Organization, and the International Criminal Court. As American political sovereignty diminishes toward a vanishing point, the American experiment of government by, for, and of the people dwindles away.

President Trump rejects the globalist project. In his first speech at the United Nations, he made that quite clear:

Our government’s first duty is to its people, to our citizens—to serve their needs, to ensure their safety, to preserve their rights, and to defend their values…All responsible leaders have an obligation to serve their own citizens, and the nation-state remains the best vehicle for elevating the human condition.

What is most amazing to me is that there is no scandal and no pushback from an aroused American public about what happens on New Year’s Eve. Once upon a time, presenting Americans year after year with a celebration of the New Year featuring a song inviting us to imagine a world without America would have simply been unthinkable. Now it goes unremarked, even seemingly unnoticed.

In any case, I say let’s take Brennan at his word; a vote for Biden is a vote for a post-American world. A Biden victory might actually get us more than halfway there.

Robert Curry serves on the board of directors of the Claremont Institute and is the author of Common Sense Nation: Unlocking the Forgotten Power of the American Idea and Reclaiming Common Sense: Finding Truth in a Post-Truth World. Both are from Encounter Books.