The Wallacization of Fox News

The Wallacization of Fox News

If there was any doubt in your mind that Fox News was on a trajectory to becoming a full-fledged, left-leaning media company, it should have evaporated after Chris Wallace’s brazen attacks on Donald Trump last week at the presidential debate.  Wallace dropped any pretense of impartiality and made it clear to all that he’s nothing more than a sniveling Democratic hack.  Watching him team up with comatose Joe to make blatantly false claims about Trump and prevent the president from engaging Biden head-on was appalling.

Having alienated millions of its own viewers, you would have thought Fox would swiftly apologize for Wallace’s obnoxious, hate-filled performance, but that would have been wishful thinking.  Instead, Fox executives immediately came out with an internal memo congratulating Wallace for his handling of the debate and praising his “professionalism, skill, and fortitude.”  What a croc.

Whatever else you may think about Wallace, the one thing that is undeniable is that he was totally biased and unprofessional in his role as moderator of last week’s debate.  After stating at the outset that his job was to be invisible (the only true statement he made all night), he then proceeded not only to be highly visible, but to become an active participant on behalf of Sleepy Joe.

At one point in the video, to make certain he would not be misunderstood, President Trump unequivocally states, “I’m not talking about the neo-Nazis and white nationalists, because they should be condemned totally.”  Clearly, Chris Wallace knew before he confronted Trump yet again with the “renounce” question that the entire thing was a lie and that by once again bringing it up he would be aiding and abetting Joe Biden’s repeated false claims about what Trump actually said.

But perhaps the most annoying thing Wallace did was repeatedly cut off Trump from responding to Biden’s nonstop lies.  For crying out loud, the whole purpose of a debate is for the combatants to mix it up with their opponent.  Watching them in action is the only way viewers can judge the merits of the candidates.  Wallace, of course, knew that Biden had no chance against Trump, that his only weapons were his childish sneering and name-calling, so he focused on making certain that Trump was not able to challenge him with the facts.

Since his shameful, partisan performance as moderator of the first debate, Wallace, secure in the knowledge that Fox execs would protect him, has been all over Fox News defending himself.  And things were going along quite smoothly for him until he made the mistake of having Trump campaign advisor Steve Cortes as a guest on “Fox News Sunday.”

“Chris, the way you’re starting to harangue me now actually reminds me of what you did to the president during that debate on Tuesday night,” Cortes said.  Embarrassed, Wallace shot back, in a sarcastic tone, “Oh, yeah, I harangued him.”

Cortes then accused Wallace of being an “effective opposition to the president,” adding that Trump “had to debate not just Joe Biden, but you as well.  You were not a neutral moderator.”  Trying hard to keep his composure, it looked for all the world like Wallace was peeing his pants on live TV.

By contrast, Newsmax’s Chris Salcedo unmercifully tore into Wallace and his disingenuousness.  He rightly wanted to know why Wallace had no interest in asking Joe Biden about the plethora of racist comments he has made over the years, his sponsorship of the 1994 Crime Bill that led to the mass incarceration of minorities, his close relationship with former Klansman Robert Byrd, or his statement about not wanting his kids to grow up in a “racial jungle” (in regards to desegregation).

Which brings me to uber-nasty, uber-liberal John Roberts, Fox News chief White House correspondent who exhibits pretty much the same liberal values as his namesake on the Supreme Court.  The vitriol coming from this hyperbolic Trump hater is breathtaking.  Last week, frustrated by his party’s failure to take down the president, he tore off his mask and openly unleashed his hatred for the president.

Like Wallace, Roberts had a Trump Derangement Syndrome meltdown and started badgering White House Press Secretary Kayleigh McEnany yet again about why President Trump still refuses to clearly condemn so-called white-supremacist groups, even though he has done so more than 20 times.  Seemingly on the verge of tears, Roberts shouted,    “Stop deflecting.  Stop blaming the media.  I’m tired of it,”

It’s been very sad watching the once-great Fox News sink into the media swamp.  It is now as corrupt as the deep state, going so far as to protect anti-American, pro-antifa/Black Lives Matter billionaire George Soros.  The good news is that it is creating an incredible opportunity for Newsmax TV to become the most important voice in conservative news.  With anchors Chris Salcedo and Greg Kelly leading the way, Newsmax is a real threat to Fox News’ dominance if it does not fall into the “fair and balanced” trap and sticks with a proven formula:  all conservative, all the time.

It’s also an opportunity for Fox’s big three — Tucker, Hannity, and Laura — to step into starring roles at Newsmax in the not-too-distant future.  I believe all three of them are on the way out at Fox, and I have a hunch they’ve known it for quite some time.  I’m sure they would have loved to rake Chris Wallace over the coals, but, with the exception of a modest tweet from Laura Ingraham (“Trump is debating the moderator and Biden”), they realize that criticizing him would only hastened their departure. 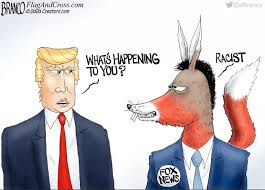 That said, it’s time to hold our noses and watch the undercard event tonight between one of the most dignified, accomplished, eloquent statesmen of our time, Mike Pence, and a repulsive hyena who is devoid of principle, slept her way up the political ladder, and will say or do absolutely anything to get ahead.  In a fair fight, Pence would annihilate Harris far more than even Tulsi Gabbard did, but who knows what will happen with an ex-Biden intern, Steve Scully, posing as the moderator.  No stacked deck here, right?

As the great Chris Plante has so often mused, “Ah, it’s good to be a Democrat, isn’t it?”