What could possibly go wrong?

Perhaps as disturbing as the sex textline itself is the marketing used to promote it. Slick, teen-targeted postcards promoting Governor Northam’s Brds’N’Bz have been mailed to addresses all over Virginia. Those postcards are designed with artwork geared toward teens. It shows teens using mobile phones and taking selfies. 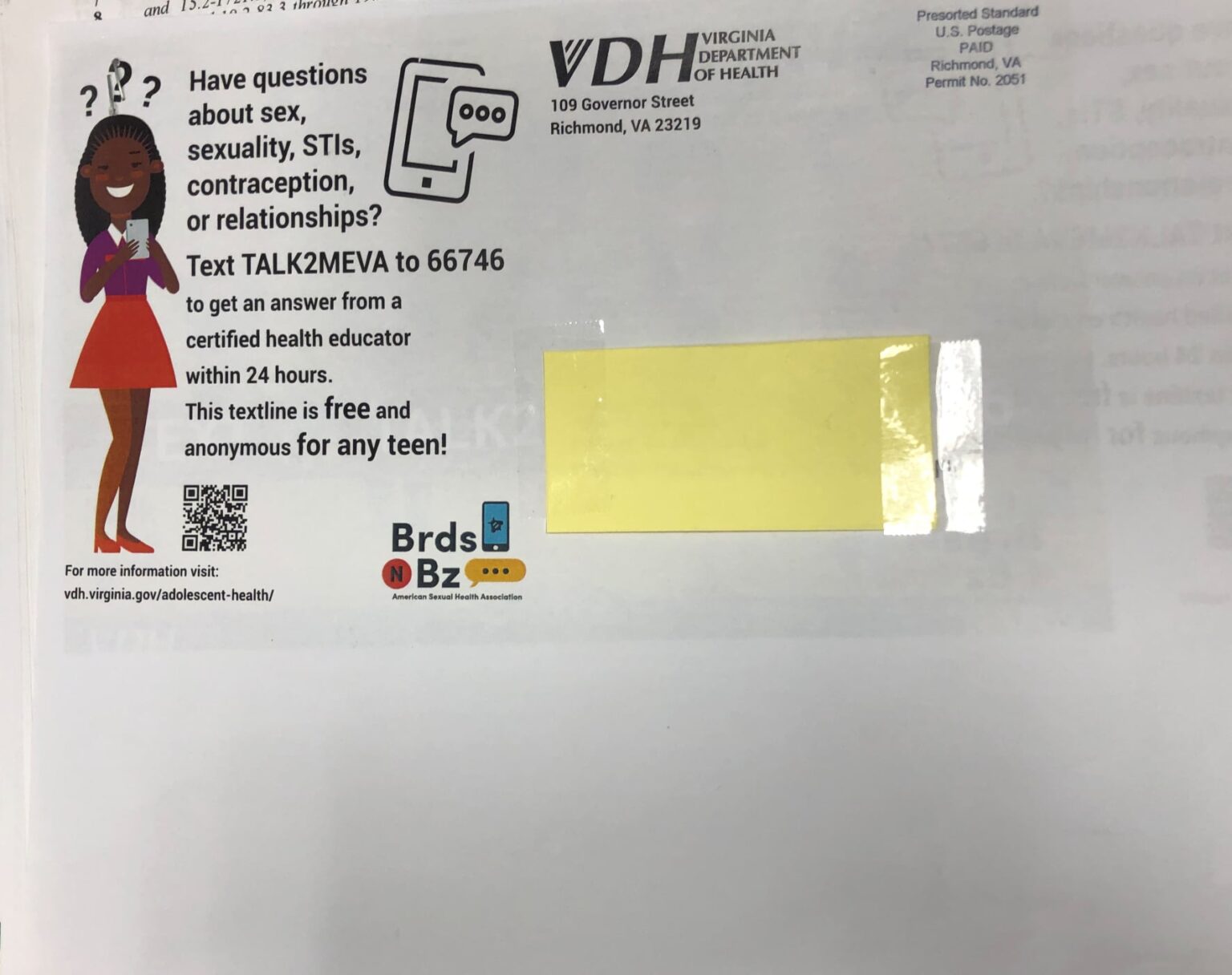 The text on the front reads:

Have questions about sex, STIs, contraception, or relationships? Text TALK2MEVA to 66746 to get answers from a certified health educator within 24 hours. This textline is free and anonymous for any teen!”

On the reverse side, the postcard shows five teens — three girls and two boys of various ethnic groups — using their mobile phones. 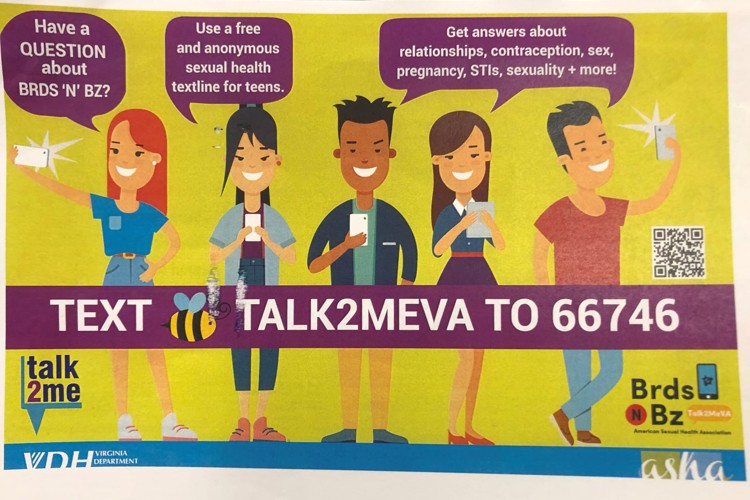 The word bubbles above the teens say,

Have a QUESTION about Brds ‘N’Bz? Use a free and anonymous sexual health textline for teens. Get answers about relationships, contraception, sex, pregnancy, STIs, sexuality, + more!

It also directs teens to text Talk2MeVa to 66746 and includes the logos for both the Virginia Department of Health (VDH) and the American Sexual Health Association (ASHA).

Before getting into the sex textline itself, let’s spend a few minutes unpacking the postcard. The teen-oriented graphics appear cleverly designed to make this postcard look and feel very appealing to young people. The postcards are actually addressed to teens living at the addresses to which they are mailed. The multi-cultural cartoon drawings of both boys and girls of various racial groups is clearly intended to cast a wide net to gather as many teens as possible.

As disturbing as all of that is, though, the fact that two of the teens are seen taking pictures of themselves is a real shocker. Surrounded by text about sexuality, the selfie element takes on a whole new meaning. By joining those two things, VDH and ASHA are guilty of sending a subtle message to teens about violating the basic rules of safe use of technology. In the context of sex, the idea of teens taking selfies should raise red flags for anyone paying attention. The psychological effect of combining those elements serves to connect them in the minds of kids who are — because of their biological level of mental development — already prone to taking risks without counting the costs. Given the data about teen “sexting” that is widely available — and therefore, certainly known by anyone who is a “certified health educator” — one should be able to expect the adults at VDH and ASHA to at least keep those things separate.

But then, one should also be able to expect those adults to leave the moral education of kids to parents. And that is the real issue with this campaign. The purpose of this campaign is to make an end-run around parental authority where moral training is concerned. This is especially interesting since the ASHA website includes a page about parents talking to their kids about sex. The button leading to that page says, “You are your child’s most important teacher. Be an askable parent.”

The page itself is filled from margin to margin with advice, beginning with, “Educating a child about sexual health is an important part of his or her healthy development. Their early understanding of sex, love, intimacy and their own sexuality can help mold their values, behavior, and even their self-image, for a lifetime.” The page also asks, “Does your child feel it’s okay to talk with you about sex and sexual health? If not, have you thought about who will answer your child’s questions?”

This mass-mailed postcard to teens across Virginia is apparently the answer to that question — “anonymous” adults (i.e., strangers) will be the ones “who will answer your child’s questions” about sex and sexuality — making them the ones who will provide guidance on “sex, love, intimacy and their own sexuality” and “mold their values, behavior, and even their self-image, for a lifetime.”

The state and its approved organizations are the new parents. Marx would be proud.

This writer asked several parents of teens and children in Virginia whether they were aware of the postcards and campaign. Some were, but many were not. Those who were were very upset and concerned. So were those who weren’t — once I shared the postcard with them. They are not alone. One pro-family organization in Virginia — the Richmond-based Family Foundation — is taking action to expose and shut down the textline.

In a post on the official website of the Family Foundation, the organization lays out several points of concern. Chief among those concerns is the nature of encouraging teens to text adults — anonymous strangers — about sexually explicit topics. As the post states, “The Governor’s new “BrdsNBz” sex-textline has undermined everything I’ve been teaching my kids about stranger dangers.” It then addresses a litany of points that explain how this campaign endangers kids. Those points include: 1) It’s aimed at our kids — and it encourages them to share private details with strangers, 2) One of the most common signs of sexual-predator grooming is encouraging kids to keep secrets from parents, 3) It encourages kids to give their cellphone numbers to strangers, and 4) It doesn’t acknowledge the danger of kids texting graphic content.

Stop and ask yourself about every conversation you have ever had with kids about “stranger danger.” Did any of those conversations include the idea that sneaking around behind parents’ backs to text sexual content — including questions of a personal sexual nature — to anonymous strangers (adults, no less) while providing that stranger with information that could be used to identify the child is safe and acceptable? Of course not.

And while this sex textline promises to keep the teems “anonymous,” this writer has reason to doubtthat. Because in an attempt to see just how deep the rabbit hole goes, this writer texted the sex textline (not a sentence I ever thought I would type) to ask — in the persona of a 13-year-old boy who believes he is really a girl on the inside — about a sexual relationship with an “older” boy.

First, the number I texted to was not the number that texted me back. I texted Talk2MeVA to 66746. I received a text back from 833-933-6655. The message read, “Success! 1. Reply to this text w/ your question or message. 2. Save this number in ur phone as Talk2MeVa to text us later. Reply stop to quit.” So far, I had every reason to believe that I was having a text conversation with VDH — an official department of the state of Virginia. So, I texted, “I am 13 and feel like I am a girl even though my body is a boy. My parents don’t know that I have an older boyfriend. What should I do?”

The second interesting thing that happened was that only after I sent the question did I receive the first indication that my conversation was with a third party. The reply read, “Thnx 4 textingBrdsNBz — part of the American Sexual Health Association (ASHA). We’ll get back 2 u ASAP. +Find info at http://iwannaknow.org/”

Third, though the message said they would get back to me ASAP and the postcard promised “within 24 hours,” I have waited four days and have not received any reply. I will update this article if that changes. Given that I am a journalist whose phone number is registered in my name — a name that is easily searchable to learn who I am and what I do — I suspect that the promise of anonymity is so much smoke and mirrors. I likely never received a reply because the handlers on the other end figured out — in the few nanoseconds it took their computer script to connect that number to me — that I asked that question for the sake of an article exposing their agenda.

Again, that is an educated guess, but given what I know about how text services work and how easy it is to have a script set up to identify the person who owns a phone, it seems to me the most reasonable explanation. Otherwise, are we to believe that my text just fell through the cracks?

The New American spoke with Victoria Cobb, president of the Family Foundation, to ask her about her organization’s efforts to expose and end this campaign. She told The New American that the Family Foundation’s goal where the sex textline is concerned is twofold: First, to have enough Virginia parents sign a petition demanding that the program be shut down, and, second, to overwhelm the textline with complaints from parents so that the third parties involved know that Virginia parents consider this highly inappropriate.

“This really is [at least] two different parties engaged in this effort [to sexualize teens at earlier and earlier ages],” Cobb said. “First is the governor and the second is the party they’ve outsourced this to — the American Sexual Health Association.” The Family Foundation’s plan to shut down the sex textline for teens recognizes that both of those entities are necessary for this program — which Cobb describes as “insidious” — to continue. So, both the petition — aimed at the governor — and the plan to have parents’ text their complaints to the textline — aimed at ASHA — are essential components to shutting it down.

As to the nature of the sex textline, Cobb told The New American that in the natural course of human families, parents are responsible for the moral training of their children, and this “overstepping” on the part of the state is unacceptable. “All adults should be encouraging kids to talk to their own parents about these sensitive topics,” she said, adding, “Having any conversation over technology about sex — especially with a stranger — is the exact opposite of the way any responsible parent trains their child.”

Cobb explains, “We say, ‘Don’t talk to strangers. Don’t give out your phone number. Don’t send any inappropriate pictures. Everything you do on the phone is permanent.’ This sex textline is counter to all safe teaching about technology.”

Cobb says she want to have parents “convince Governor Northam and the outside party that’s running this sex textline to simply stop invading our homes — to stop asking our children to connect with strangers about the topic of sex.” She added that parents in Virginia should “guard your mailboxes so that your children do not get solicited in this way.” After all, kids don’t need to be exposed to oversexualized material, and it is the job of parents to protect them from predators.

For those outside Virginia: Expect a program such as this to come to your state. Be prepared and fight it with everything you have. Your children will be the targets of this plan and they need you to protect them.

This article is the first in a series addressing this topic. The next article will address the reaction of Virginia parents to Governor Northam’s plan to sexualize their kids.