It’s amazing what can happen when the silent majority actually speaks up and demonstrates where the “woke” mob’s power really lies: in the illusion that it has power.

An apparent case in point is grocery store chain Trader Joe’s (TJ) decision to reverse course and not change its brand labeling, something demanded by a small group of white “Karen” petitioners who’d called the labeling “racist.” The company’s recent statement on the matter reads, in part:

To Our Valued Customers:

In light of recent feedback and attention we’ve received about our product naming, we have some things we’d like to say to clarify our approach.

A few weeks ago, an online petition was launched calling on us to “remove racist packaging from [our] products.” Following were inaccurate reports that the petition prompted us to take action. We want to be clear: we disagree that any of these labels are racist. We do not make decisions based on petitions.

We make decisions based on what customers purchase, as well as the feedback we receive from our customers and Crew Members. If we feel there is need for change, we do not hesitate to take action.

Decades ago, our Buying Team started using product names, like Trader Giotto’s, Trader José’s, Trader Ming’s, etc. We thought then — and still do — that this naming of products could be fun and show appreciation for other cultures. For example, we named our Mexican beer “Trader José Premium” and a couple guacamole products are called “Avocado’s Number” in a kitschy reference to a mathematical theory. These products have been really popular with our customers, including some budding mathematicians.

… Recently we have heard from many customers reaffirming that these name variations are largely viewed in exactly the way they were intended­ — as an attempt to have fun with our product marketing.

In truth, TJ is doing a little damage-control dance here: Despite the above claims to the contrary, it was just seven days prior to their issuance that the company expressed the following, on July 17:

[While our] approach to product naming may have been rooted in a lighthearted attempt at inclusiveness, we recognize that it may now have the opposite effect — one that is contrary to the welcoming, rewarding customer experience we strive to create every day.

… We made the decision several years ago to use only the Trader Joe’s name on our products moving forward. Since then, we have been in the process of updating older labels and replacing any variations with the name Trader Joe’s, and we will continue do so until we complete this important work.

Nonetheless, TJ should be applauded for finally resisting “the cancel culture that’s taking every minority face off food-label packaging, from Mrs. Butterworth, to the Cream of Wheat man, to Aunt Jemima, to Eskimo Pies, to the Land O’Lakes Indian maiden and more, leaving just the faces of whites on the packages,” as commentator Monica Showalter puts it. Sanity has prevailed, at least for now (though the leftists are currently agitating further against the company), and TJ should be supported.

Moreover, this incident is most significant in that it illustrates some important lessons.

The people constituting the “market,” who actually buy the products, don’t as a whole care a whit about “woke” ideology, and companies will listen if they complain loudly enough.

In contrast, leftist activists are a mouse that roars, a minuscule percentage of the population that dominates social media (only partially because of conservatism-suppressing censorship) but is very, very loud. Like a frilled dragon expanding its neck (video below — just imagine the little guy screaming “That’s racist!”) to make itself look far larger than it actually is, their power lies in illusion. 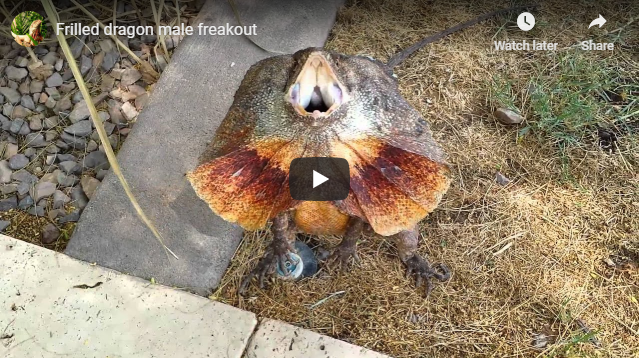 It’s the corporations themselves that hold and exercise the “cancel” power. Of course, society has shifted left, and many thus indoctrinated do infest corporate America. Yet insofar as businesses are actually afraid of the social-media mob, they should remember that just as Kim Kardashian West is famous for being famous, the wokesters’ power lies in the belief they have power.

Illustrating this, note that the petition to cancel TJ had garnered only 4,900 signatures at last count, according to Showalter — in a country of 331 million people. This ain’t exactly a mass movement.

Much as the anti-plastic-straw agitation — which led to some local plastic straw bans — began with a nine-year-old’s flawed “science” project, the cancel TJ movement is spearheaded by a San Francisco Bay Area teen high-school student named Briones Bedell. But there’s a reason why one had to be at least aged 60 to be part of ancient Sparta’s ruling body; it’s the same reason why our “youth culture” exaltation is killing us. It’s long past time to tell the presumptuous, brassy brats to sit down and shut up.

TJ’s supposed trespass is something dullards have dubbed “cultural appropriation,” which the Cambridge Dictionary defines as “the act of taking or using things from a culture that is not your own.” Yet this profoundly senseless complaint should insult every thinking person’s intelligence — for so-called cultural appropriation is a prerequisite for great civilization.

Consider Professor Thomas Sowell’s 1998 explanation of why few, “if any, of the great advances in human civilization have come from isolated peoples.”

“For example,” he wrote, “when the British first crossed the Atlantic and confronted the Iroquois on the eastern seaboard of what is today the United States, they were able to steer across that ocean in the first place because they used rudders invented in China, they could navigate on the open seas with the help of trigonometry invented in Egypt, their calculations were done with numbers invented in India, and their general knowledge was preserved in letters invented by the Romans.”

Today, as always, we see the same phenomenon: Businessmen the world over, including Japan, don Western formal wear (suits and ties); nations everywhere embrace Western culture, sometimes to their detriment (think: Hollywood effluent); and they adopt Western innovations/technology, from autos to airplanes to computers to refrigeration to medicine to military advances (China even steals it) and beyond. Examples are endless.

At issue are “Two heads are better than one” and melting-pot phenomena, which are the pattern of civilization: taking the best ideas and innovations (hopefully) from others and amalgamating them into a new and improved (hopefully) civilization.

Troubling over this natural process is like complaining about a child appropriating his parents’ DNA. It’s a passion of overgrown babies — and it’s long past time for a spanking.