There is a dirty little secret no anti-hunting group will admit to when it comes to closing down predator hunting across the United States. The secret they don’t want you to know is that even if you shut down hunting, the animals still will die. And people still will kill them. The only thing that changes when you eliminate legal, regulated, management hunts for predator species such as big cats, wolves and bears (as well as prey species such as whitetail deer) is that the government will hire professionals to do the job—a topic covered on this site many times.

That’s the job assigned to a division of the U.S. Department of Agriculture (USDA) called Wildlife Services. The division is brought in when legal hunting is abolished and predator numbers, and predator-human conflicts, grow. Does that make much sense to you? Taxpayer dollars being used to do something hunters have been effectively doing for generations? Now I have nothing against Wildlife Services, but frankly, if a hunter is willing to do the job, and pay for the privilege of doing it, then the choice is obvious. Those are my tax dollars too.

Or the ugly alternative is that people will take matters into their own hands. Witness the recent poisoning of a big male mountain lion in California. In a USA Today story from this past spring, a telemetry-collared cat was found dead near Los Angeles. A necropsy found that “the 3-year-old male had been exposed to six different anticoagulant rodenticide compounds.” Yep, death by rat poison. The California Animal Health and Food Safety Lab determined that “the mountain lion suffered internal hemorrhaging in his head and lungs.”

That’s a direct result of California banning all hunting of the big cats back in 1990. The population is growing quickly, and conflicts are becoming regular. Similar stories are occurring in other states that have banned mountain lion hunting. Washington state and Oregon have both seen an increase in cat numbers and, surprise, surprise, an increase in cases of conflict between the big predators and humans.

In the case of Washington, there have been two fatal encounters between the big cats and humans in just the past year. As reported by NRAHLF.org, the first resulted in the death of one cyclist and the mauling of another near Seattle.

Just a few months later, a woman hiking near Oregon’s Mount Hood was killed by a mountain lion in the state’s first recorded fatality of the kind. Stand by for more as the large predators expand their range in all directions. 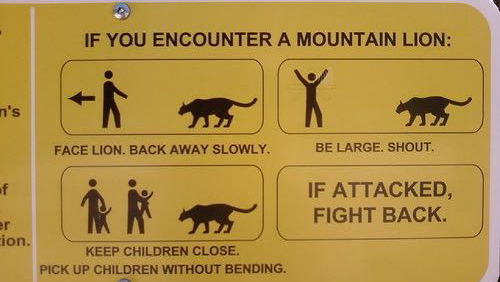 The California Department of Fish and Wildlife uses these signs to inform people how to react if they encounter a mountain lion.

In my home state of Wisconsin, a state hardly known for big cats, confirmed sightings of mountain lions are an ever-increasing phenomenon. In 2011, a cat passed quite near my home in the suburban Twin Cities. Ultimately, that particular lion was struck by a car in—get this—Connecticut. More Recently, dozens of sightings have been confirmed all across Wisconsin… 17 last year alone.

Big cities outside of the American West are having to deal with the expanding lion population, too. A few years ago, a cat showed up on the north side of Chicago. Predictably and wisely, when the animal was finally cornered in an alley, it was shot by police. An apex predator running around a city like Chicago is another human fatality or potentially dangerous encounter waiting to happen.

Just last week police officials in Elk River, Minn., took to social media to warn residents about a mountain lion roaming the neighborhoods in this bedroom community just northwest of Minneapolis. Hunter friends in the area tell me that with all the trail cameras in the woods these days, sightings of the big cats are becoming common.

I point out all these instances of the big cats showing up in places we wouldn’t call mountain lion habitat because it’s going to happen more and more. And now that anti-hunting extremist groups like Humane Society of the United States and Wild Earth Guardians have had some success in shutting down controlled hunting seasons and methods in places like California, Washington and Oregon, they’ll only be encouraged to continue their deception of the public in their stated plan to end all hunting.

Right now, as covered by this website on June 12, anti-hunting extremist groups are fighting to shut down bear hunting over bait in Idaho and Wyoming, and they were narrowly defeated when they attempted to ban bait and hound hunting of black bears in Maine in 2014. Their logic is invisible. They claim that grizzly bears, currently protected under the endangered species act, are more likely to die incidentally when black bear hunters use hounds or bait. Nothing could be further from the truth as both hunting techniques give the hunter maximum time to assess the animal being hunted, avoiding making the very mistake the antis claim will occur.

And now we come back to the dirty little secret, and it shouldn’t be a secret anymore. Despite the anti-hunters’ claims that they are saving these apex predators from the hunter’s bullet, the animals still die. Wildlife officials will still use bait and hounds to find and kill them. Even though California banned lion hunting in 1990, “that hasn’t stopped scores of lions from being killed in the state every year,” according to a 2017 Sacramento Bee story. In fact, given the rising population in that state—human and lion—the number of the cats killed by professionals has been on the increase ever since the ban went into effect, currently averaging nearly 100 mountain lions a year.

Ultimately, you and I will pay for it all, unless hunters are permitted to help wildlife managers with the most effective and fiscally sound management tool they possess: legal, regulated hunting.

About the Author: Keith Crowley is an award-winning writer and photographer and the author of three books on the outdoors: “Gordon MacQuarrie: The Story of an Old Duck Hunter,” (2003), “Wildlife in the Badlands,” (2015) and the newly released “Pheasant Dogs.” When he is not traveling in search of new stories and new images, you can find him at his home on a lake in northwest Wisconsin with his wife, Annette, and a collection of old dogs and old boats.