“Shoot the white folk!” is something you won’t hear in the mainstream media. It sure was heard on Minneapolis streets Wednesday night, though, as authorities fiddled while the city burned. And the fiddling and the burning are largely due to the mainstream media’s burning of truth.

While the media are consumed right now with the George Floyd case — the arrestee who died in Minneapolis police custody May 25 — you probably never heard about another police killing story, one that may prove instructive here. It involves the murder of 46-year-old Fairfax, Virginia, resident John Geer, by a police officer with known “anger issues” who’d been subject to four internal-affairs investigations. Geer had committed no crime the day he was shot — even the policeman who killed him admits that. Nor was he drunk or posing a threat at the time.

Oh, and the above was corroborated by six witnesses — four of whom were police officers.

It was an unjust killing, alright, and the cop who pulled the trigger was eventually charged with second-degree murder, pled down to involuntary manslaughter, and was released after just a bit more than 10 months in prison. That’s what a black life is worth in America, some might say.

Except that John Geer, the victim, was white.

Geer was killed by Hispanic officer Adam Torres in 2013. And even though the case was largely ignored for 18 months and wasn’t finally adjudicated till 2016, there were no protests.

There were no riots.

There were no burned buildings.

There was no looting.

Oh, there was no national media coverage, either.

Note also that there were no white people screaming “Shoot the Hispanic folk!” — but you can bet there would have been national media coverage if there were.

Old news, you say? An outlier? In reality, unjust police shootings are outliers; most such shootings constitute self-defense or the protecting of the innocent. The truth, however, is that among criminal suspects killed, whites are hardly the outliers that the mainstream media (MSM) portray them to be.

This isn’t surprising. Police are human and respond to social pressure and dangers associated with courses of action. If they know that even justly shooting a black suspect can bring media demonization, pariah status, career destruction, and death threats — as in the Darren Wilson/Michael Brown incident (Ferguson, Mo.) in 2014 — it will affect their thinking and behavior.

Add to this that police shootings of black suspects have declined 75 percent in recent decades and the picture is clear:

There is no epidemic of police killing black suspects. (Nor is there an epidemic of cops killing white ones, to be fair.)

But you wouldn’t know it from the MSM, which are fanning racial unrest’s flames and are, frankly, largely responsible for the Minneapolis violence. Just consider the shameful examples Fox News host Tucker Carlson presented Thursday night (video below. Note: Carlson starts off being facetious). 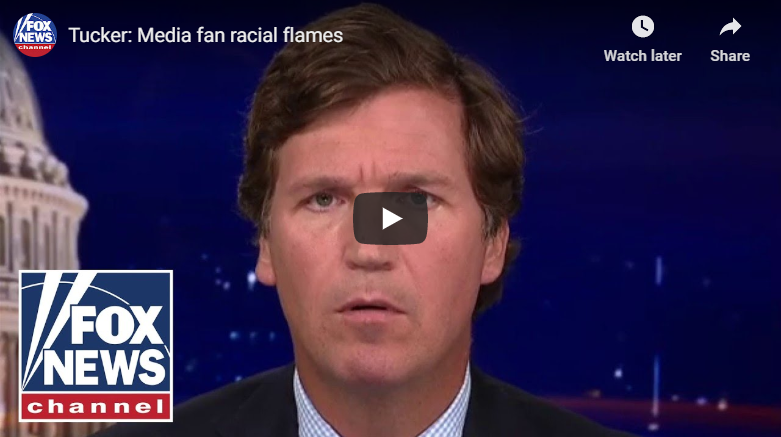 But it’s worse than that. Not only are the MSM suppressing truth — they’re also peddling racially divisive lies.

As revealed in the Carlson video above, the MSM figures’ narrative was that white people can protest, even carrying weapons as some did in Michigan anti-lockdown events, and they’re treated with “kid gloves.” But with the black people in Minneapolis, there are “police in riot gear, flooding the streets with tear gas and shooting rubber bullets into the crowd,” as an MSNBC news segment put it.

But was she talking about the individuals below? 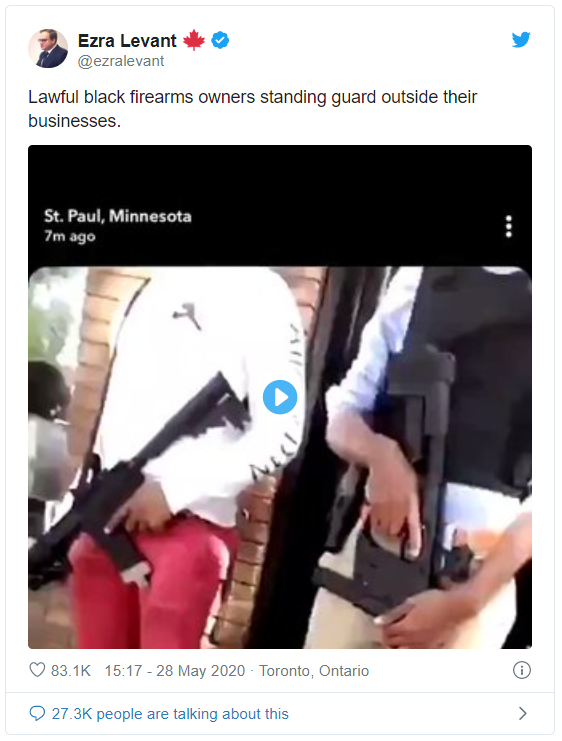 The above black business owners were rightly exercising their Second Amendment rights — and so were the white protesters Reid and her fellow travelers were complaining about. Both groups were carrying the same “terrifying” (to a snowflake) weapons, too.

So MSNBC is right (in a way) in stating, as it also did in its aforementioned news segment, that the Minneapolis situation serves as a “black light exposing all the inequalities in America.” The white protesters the MSM were complaining about endured no law enforcement action because they were not breaking the law. They protested peacefully.

The Minneapolis rioters are just that — rioters — and are burning, looting, vandalizing property, and committing other violent acts. Yet an unjust double standard is being applied to these two disparate groups, by the MSM, as it demonizes the peaceful protesters and sanitizes the rioters — all because of skin color.

Moreover, all the feckless Minneapolis authorities have done is declare “racism” a national emergency to justify the violence.

This, not to mention the leftist double standard whereby “locked down” people who merely want to open their businesses are arrested, while people who burn businesses are applauded. I suspect that if the anti-lockdown protesters caused one-tenth the Minneapolis mayhem, the MSM would be happy to see them rolled over with a tank.

As for George Floyd, I do hope justice is done. It would be nice to see justice done with the MSM and academia, too, though. Of course, they’d then be out of their jobs — lockdown or no lockdown.