Three reasons for this.

1) We can see how much misery there is with a shutdown economy. The relationship between the economy and energy is synergistic. The economy does not go without energy. If the economy tanks there is no demand for energy and with it a large portion of jobs. What is so great about that future?

2) The idea that you can take out the entire fossil fuel industry means many jobs will be lost. Look at all the things that are made that require the use of fossil fuels. You cannot build wind turbines or have a solar panel fields without some way to get the materials, which had to be made with energy, to the site.

3) The shutdown is currently proving Man is not driving the bulk of the CO2 input into the atmosphere but instead its the cyclical warming of the CO2 rich oceans which outsource it to the air. You can open a can of soda and understand that.

From this link:  Is Carbonation Affected by the Temperature?

Carbonated drinks tend to lose their fizz at higher temperatures because the loss of carbon dioxide in liquids is increased as the temperature is raised. This can be explained by the fact that when carbonated liquids are exposed to high temperatures, the solubility of gases in them is decreased. Consequently, gas that has not dissolved can easily be lost.

The increase in SSTs can be seen by comparing now to 30 years ago (on the left).

That has to outsource much of the co2.

So with the world’s economies tanking the last  3 months, and remember the US contributes only 15% of man’s input, why has the seasonal rise of CO2 not diminished? 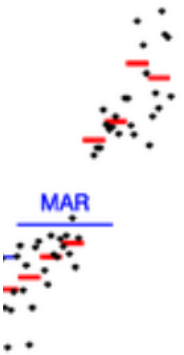 In addition, the jagged rise of CO2 is further proof that the way to counter its increase is through planting billions of trees. If their agenda was truly concerned about it, then why not use a classic GREEN solution? 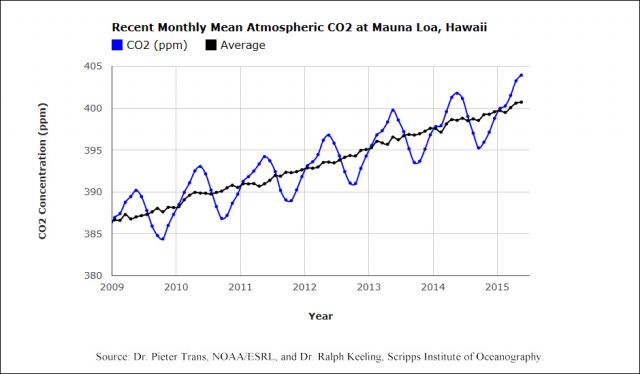 The reason for this is in the northern hemisphere, where winter has a reduced plant life resulting in a reduced CO2 output. In addition, there is more of man’s input of CO2 from having to heat our home, but is that the major cause? If so, why has there been no diminishing rate of increase?

The COVID-19 outbreak right now, with no slowdown in the seasonal rise, is exposing that the oceans have still not reached a satisfactory equilibrium and are certainly a big input mechanism. That the climate agenda is pushing the idea that this is what we can do without fossil fuels, relies on people not looking beyond what they are being told. Even with the economies opening, if Man was contributing the lion’s share of the co2, then there should be a response. Yet right now there is no response. The seasonal downturn is coming and it should be more than average if this is mainly man-made.

As always this will be attacked as anti-environment when nothing is further from the truth. Let me lay my cards on the table. I am an all of the above energy guy. I am a fan of wind and solar because they need forecasts every day, in fact, every hour.  Additionally, what I do for a living is forecast where wind and cloud cover are huge variables. So there is plenty of reason for me to want wind and solar involved. They need the same longer range forecasts as fossil fuel companies and the extra daily forecasts. Besides what’s not to love about a cheap free source of energy, except in its current state it’s neither compared to another source and cannot be stored efficiently. In any case, I am not a fan of forcing things down people’s throat with painful measures.  In addition, not only is there a greener solution but why are we still being held hostage by the “China Syndrome”?

This is America in 2020. We can build safe carbon-neutral nuclear plants. Until such a time that wind and solar can be phased in as their technology improves, they are not the solution but just a part of it. I am not for stopping their advancement in the least. Great forecasts can cheapen costs!

It defies common sense the left is cooing over a CO2 free input from man when right in their face the data is showing that it is still increasing. So how is it Man? If there is lag then there has to be some response down the road to a greater than average fall in the summer months.

When this current crisis wanes, given the natural hysteria over any hurricane or any event out of the ordinary, the climate will become a huge issue in this election. I think the Trump administration should address the widespread perception among a large block of voters that they won’t even listen. For starters advance a global green agenda, take the issue away from them.  PLANT MORE TREES, not shut down the economy with a Green New Deal. You can call it a Real Green Deal.

That is not my idea, I was on a show that aired with Tucker Carlson which put the idea in my head.

See: ‘Tucker Carlson Tonight’ has a challenge for 2020 Democrats

2)  Push Nuclear power, use it as an infrastructure matter.  By addressing this issue and showing you are for freedom you can attract people more than trying to counter it with facts since most of them won’t look or listen. This issue is not about climate. That is a smokescreen for a political agenda. So you have to fight on the POLITICAL battlefield in front of you, which is this large voting bloc that is not going to listen to nerds like me arguing over climate but will listen to something that can capture their imagination. That assures them they have a future. A future that many of them are convinced will not exist, given what has been forced upon them. You don’t retreat, you re-route. This would get rid of all the nonsense that is attached to this issue, the cottage industry that has turned into a roaring factory known as ‘climate science’ which would not be so bad except if you look at who the bulk of the people pushing it are leftist. So go above them. Appeal to a true green plan. Use technology. Don’t demonize any one contributor; solar wind, fossil fuels, etc. The big thing I want is to take the issue out of their hands. Because it matters so much, people have become obsessed with it and want it out of the common sense arena, into the complex. By causing confusion from complexity, you force reliance on those in control and that is what may be behind all this. A tepid US economy and a lack of freedom of choice run counter to what made this country what it is.

Any economic ideas have to be based on free-market ideas and not forced on people or diminish their chance to have life, liberty and the pursuit of happiness.

But make no mistake about it there are simply too many people concerned about this to ignore them. Yet in the terrible time we find ourselves now, in a way, this may be showing us that man’s input of CO2 vs the entire trend is small indeed. We will know better at the end of the year, but if true, it exposes much of their missive as being a political agenda. One that only used climate and weather as a vehicle to push their points.