WHAT COMES AFTER THE CORONA CRISIS?

WHAT COMES AFTER THE CORONA CRISIS?

I hope you are safe and healthy during these difficult days. I’m sure, like me, you are anxiously waiting for that moment when we can all walk out into the sun again and begin rebuilding.

Meanwhile, I want to thank you for your continued support of the American Policy Center (APC).

They will do the very same thing in state legislatures and city councils after this crisis passes. They are determined to force the Green New Deal into every corner of our lives. If you’ve hated the empty shelves and the daily uncertainty of the Corona crisis, then you have experienced a small portion of life under the Green New Deal. I want to let you know that while most of the nation is nearly paralyzed with fear over the Coronavirus, APC is not. I am moving forward in our fight to Stop Agenda 21 and the Green New Deal threat.

We must not back away from this fight. Once the current threat passes the Sustainable forces are going to rush into the void in a drive to keep much of these emergency powers in place.

That’s just what totalitarians do.

If you doubt that, take a good look at what we have just witnessed as the Pelosi/Schumer-led Democrats blatantly took advantage of this Corona crisis by packing the stimulus bill with Green New Deal policies that had nothing to do with the crisis.

To stop them we must use our time wisely now to prepare for those upcoming fights. We must produce a well-trained force of dedicated activists who will effectively take the political fight into every local and state government.

As you know, I have been preparing to organize training seminars. Obviously we can’t do that while people are hunkered down at home, unable to gather in meetings.

So here is what I am doing.

APC is going to sponsor a series of training webinars, through the Internet, that you can participate in right there at home. We will cover details on how to research, organize, and apply pressure on local and state officials. There will also be training on how to disrupt facilitated meetings, and how to run candidates for office.

It will be a complete package. Everything I had planned to do in a day-long seminar.

Now, however, each webinar will be just one hour long. Each one will focus on one specific training issue or tactic. Each week we will add another piece. Each will be recorded and posted so you can watch again and share them.

Then, when the travel bans are lifted and we can again join together in public, we will be ready to start to push back and stop this deadly Green New Deal agenda.

Before I can begin the webinars I have to rush to produce a powerful action kit which will contain a training manual, detailed instructions, documents, sample legislation, and many more details to supplement the training webinars. As soon as that is ready, APC will begin the webinars.

As you can imagine, the virus panic has had a huge negative effect on APC’s fundraising. I’ve got to keep my people working and pay for our overhead, including the costs of the planned training action kit. Otherwise I can’t finish it. 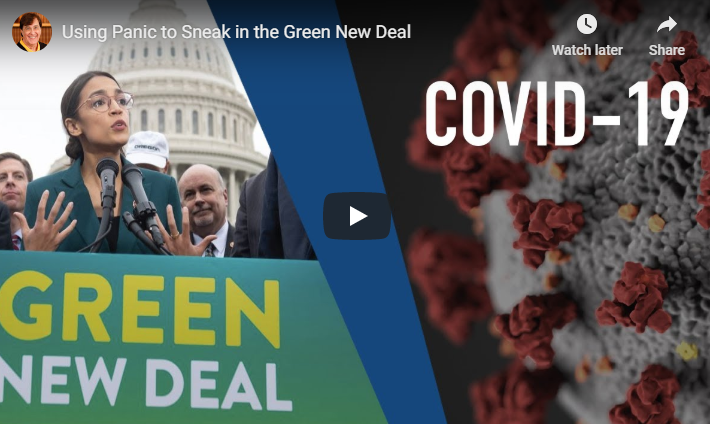 May I count on you today to help me assure APC has the urgent funding we need to make all of this happen? I know some people aren’t even able to get out to the post office to mail a check. But here you can easily use your credit card.

Please help. We have an opportunity to build a major, trained movement to stop this assault on our liberties. More people have now seen the danger of an all-powerful government control. The Left intends to continue to use fear to enforce the Green New Deal/Sustainable policies. We must prepare to stop them.

If you doubt we have the power to win this battle – then I offer you this thought: Our plan is to prepare a well-trained and organized force. Small but effective. Never underestimate the power of a pebble in your shoe!

The American Policy Center is one of the original organizations to dedicate its mission to stopping the enforcement of Agenda 21 in order to preserve American property rights. APC President Tom DeWeese has traveled to nearly every state speaking out on the threat of UN Agenda 21/Sustainable Development Policy. He has testified before local and state elected officials, while appearing on countless national and local radio and television programs. He has written three books on the subject including the best-selling book Sustainable: The WAR on Free Enterprise, Private Property and Individuals, ERASE, a fictionalized political thriller that is being considered as a movie project, and his first book titled Now Tell Me I was Wrong, which details a wide variety of related issues including property rights, radical environmentalism, public education and personal privacy issues. In addition, DeWeese has written hundreds of articles that have been published in national and local publications reaching millions of readers. The American Policy Center is supported by individual donations from approximately 100,000 citizens from across the nation providing small, personal donations. APC’s website, www.americanpolicy.org features one of the most detailed archive of articles on the subject, and is visited by readers from almost every nation in the world.

APC has helped in winning several recent property rights battles including stopping three National Heritage Area land-grabs in Virginia, Colorado, and Louisiana. Local activists educated by APC were able to lead the fight in a small town in Alabama called Bayou-La Batre, where the city council voted 5–0 to stop an Agenda 21 inspired Eco-tourism scheme that would have destroyed property rights and local industry. A team of county commissioners, using APC materials, were elected in Carroll County, Maryland by opposing Agenda 21 policy. The National Republican Party used APC materials to prepare and include an anti-Agenda 21 plank in its platform. The State of Alabama used APC materials to become the first state in the nation to pass legislation to ban Agenda 21. APC is now working with both landlords’ and cattleman’s associations across the nation to stop the destruction of these vital industries that have become victims of sustainable policy. Activists in Denmark have produced several anti-Agenda 21 videos featuring APC materials, including distributing Tom DeWeese’s book, Sustainable to Denmark’s Prime Minister and to every mayor in Denmark. A senator in Australia has used APC materials to build opposition in that country. In Brazil, APC materials have been translated to Portuguese and widely distributed to help build a large opposition in that country. The American Policy Center is the only national organization that has made the stopping of Agenda 21 its prime mission. The battle is growing.