The idea that warming has to lead  to more severe weather is directly challenged by the cold hard facts on tornadoes.

If we look at the charts of strongest tornadoes,  as the earth has warmed,  strong to severe tornadoes have dropped,  The chart is clear. 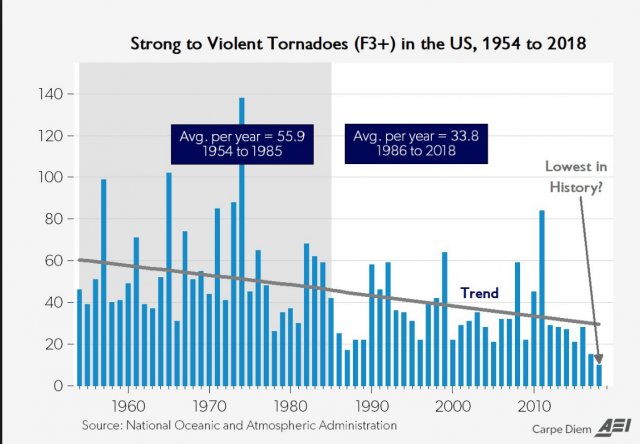 The reason for this is intuitive; Strong to Severe tornadoes develop in the times of greatest clashes between cold and warm,  When its colder in the US, it focuses the clash zone closer to areas that are going to be warm and moist in May,  So there is a ready clash,

When we look at tornadoes this year, we find its above average. 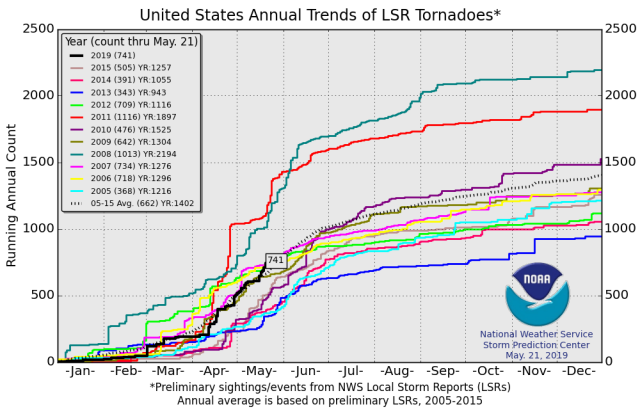 2008 and 2011 stand out like sore thumbs and of course, when they occurred they were being touted as the new normal.

There is a subtle difference between this year and the two mega years, and it is over Texas, Because of all the heavy rain, this spring  has been a bit cooler in Texas. 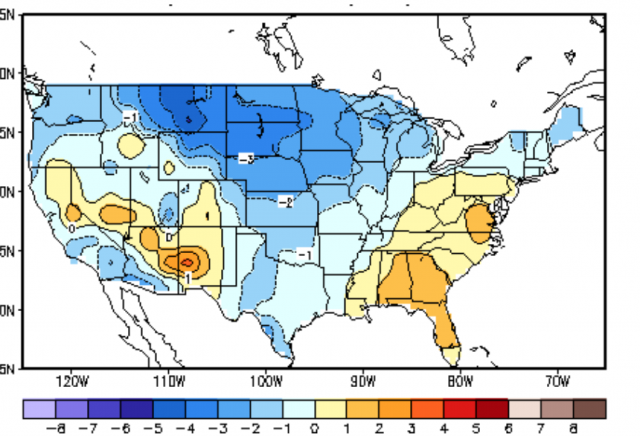 It is interesting to note the recent highest risk day was centered in the Texas Panhandle yet did not produce the number of tornadoes we saw further east.   As it gets later in the season,  even if it is cool in Texas it is still warmer overall than it was, and if the cold keeps fighting,  the severe weather increases, until later In June and beyond when the warmth is more uniform and cold air masses are much weaker in 2008 and 2011.  Texas was warm, but there was loads of cold air on the weather map. But you can see source regions were at the ready for the problem. 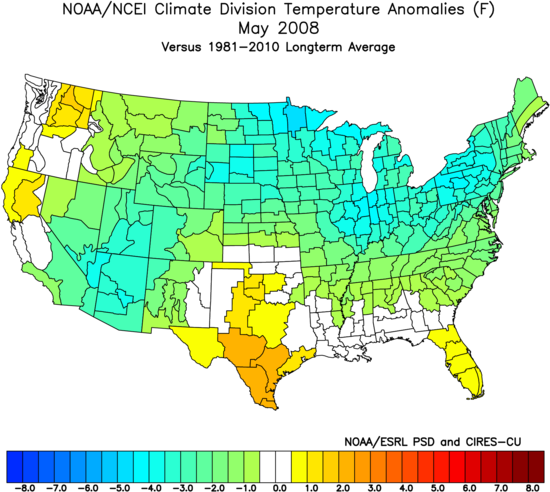 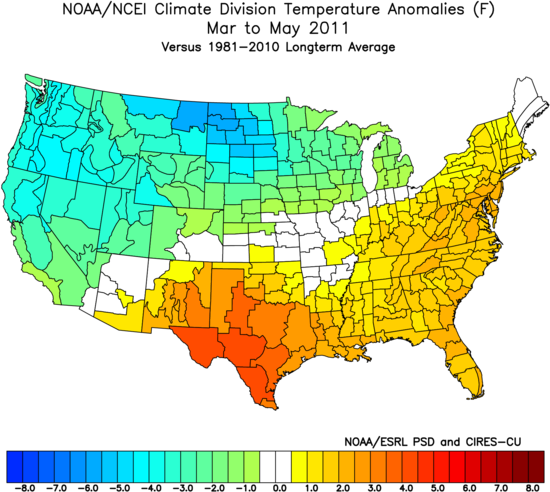 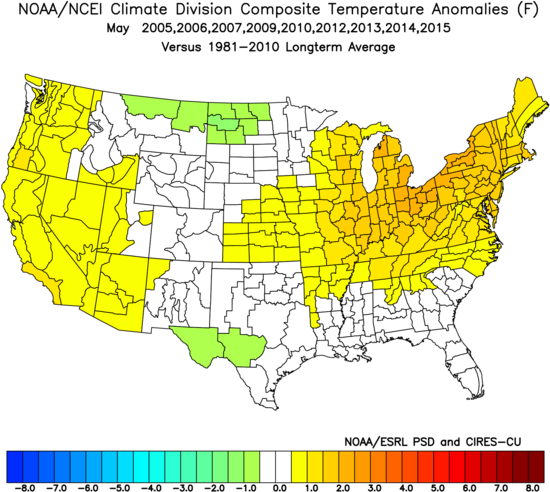 Now look at the years when there is less than average activity.

The warmth is shifted north, there is not nearly as much cooler air, and warmer over cooler is not a positive signal for severe weather.

Modeling has had a tough time holding on to cold air, Both the CFSV2 and the European models from a month out had a warm over cool temperatures pattern for the U.S.

This is a signal for below normal tornadoes, Obviously, it did not turn out that way.   As a long-range forecaster, over the last  6 months, I have become even more skeptical of modeling than I have been,  I naturally try to beat the model when I can,  If from the preseason I had said there was going to be a bigger than average tornado season ( I had normal to below)  It would have had to because I disagreed with modeling, But the model consensus was so strong for the warm over cold signal, I bought it,  But this has been happening in other things also, The preseason for winter had  a lot of consensus that agreed with my ideas.  ( its not the models fault, its mine, but one has to be able to confront being wrong)  But it turned out much colder to the northwest and warm in the targeted cold area, We knew there would be a lot of cold in the winter, so much so that the heating degree day forecast of that season ( Nov-Mar) turned out almost perfect, but the way it got that way was hardly something to be proud of.   But the point here is this, As a meteorologist that is forecasting in the long range, the overall conditions are such we are seeing modeling having a very tough time.   We can argue until we are blue in the face as to what is driving the warmer conditions. But what we can’t argue about is that with it being a bit warmer, and the resultant increase in Water Vapor, which has always been and always will be the number driving force in the weather and climate, it leads to greater challenges, in this case here, with tornadoes, unforecasted cold showing up is a big factor in the wet weather and the  severe weather, With cold on the playing field and the upper levels not warming as they have been projected, we have seen the opposite happen as far as drought projections go and of course in this case, a big severe weather season,   But the idea that a warmer planet is going to have more violent weather is a one sided idea, since if its just warm all over the place, then there is no reason for a clash, Even with tropical cyclones,  the disproportionate warm ing may be affecting the global wind and pressure fields enough to have an effect there also,  The drying over the tropics at 400mb, for instance, is something Bill Gray said would be an indicator that his ideas are right, and runs counter to trapping hot spot ideas leading to expanding ridges. 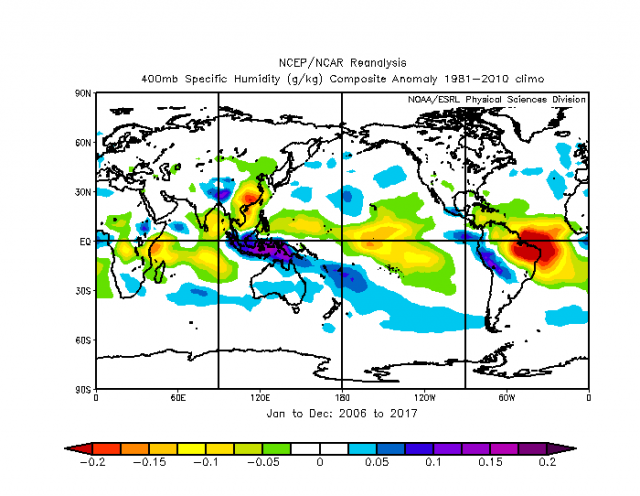 It also means more evaporation where it is sunny much of the time over the tropics, and an increase in WV which then is taken into the Mid-latitudes and if there is not the warming leads to more precipitation.  So there are some natural explanations for what we see,  What there is no doubt about is a warmer US would likely be one with LESS, not more, strong tornadoes  and that is demonstrated by what we are seeing right now and the charts above    It also means this is not a global warming rout, that there is a fightback occurring in line with natural climate cycle theory, But then again you would have to know about the past and know about that theory to understand to suspect there is merit to saying what drove the climate and weather before is still driving it now.