SOME BACKGROUND:  Journalism Is Dead, Long Live the Media! – By Victor Davis Hanson

I’ve read or viewed the considerable breathless stories from the local media about White Supremacist Matt Shea, his extreme views, and how the Spokane Valley should be embarrassed to have Shea as their State Representative.

BUT yet I haven’t seen anything regarding the cover up of the firing of Spokane County Deputy Shawn Audie for unlawful use of force and lying to investigators before Audie was hired by the Spokane School District as an SRO (Campus Resource Officer).

There are state-mandated documents filed under penalty of perjury with the WA Criminal Justice and Training Commission (CJTC) on the separation of Dep. Audie by the Sheriff’s Department.  An argument can be made that the first form submitted was not truthfully completed re disclosing findings of the Sheriff’s IA investigation sustaining Dep. Audie’s unlawful use of force and lying to investigators.  The second CJTC document was filed after Dep Audie was involved in the fight at Ferris HS which correctly now reflects, he was terminated in lieu of firing.

Sheriff’s Department, Personnel & Training Dep. Stipe wrote in a letter which accompanied the second document explaining the reasons for the correction.  Dep. Stipe said he was “directed” to complete the first and second forms in this manner.  See attached documents.

On its face Dep Stipe may have committed perjury on the first submission and whoever directed him to do so suborned perjury.  This may have been a negotiated settlement re the separation of Dep. Audie from the Sheriff’s Department.   But if so this flies in the face of the mission of the CJTC re the continuing certification of LE officers in this state.

As reported by Brian Breen:

HOW EMBARRASSING FOR THE LOCAL SPOKANE MAIN STREAM MEDIA!!!

and also, again with the documents in question and the explanation letter from Dep. Stipe:

I do have issues with Dep. Audie in the untimely death of William Berger at the hands of Dep. Audie.  Dep. Audie was cleared of any wrongdoing in this death.  The Sheriff strongly backed Dep. Audie.  The subsequent federal civil rights lawsuit while ruling against the Berger family was not so cut and dried.  Local civil rights attorney Jeffrey Finer used the term “cowboy” when reflecting on Dep. Audie in another case.

So why is the story of White Supremacist Matt Shea so important and not the firing of Deputy Shawn Audie?

The latest round of news articles are just another attempt of branding Shea by  guilt by association similar to the branding of the  Northwest Grassroots organization. This was a political hit carried out by local political operatives. There is now a political attack ad website against Shea,  meetmattshea.com which first appeared on May 9, 2019.  There is no disclosure on the site of who created this site which may in violation of WA PDC regulations.  The site links to numerous news headlines which are taken out of context.  Some of these articles are based on materials submitted by unnamed sources that are or may be related to the local political operatives.

Shea chooses not to return calls to the local media.  So what, but yet there is something nefarious inferred because Shea doesn’t respond to the media. Shea has won multiple elections by wide margins in his district.  If you believe the voters are intelligent then they know full well who they are voting for in Shea.  House reps are elected every two years.  The people are free to vote Shea out of office at the next election.  Is the media trying to further a narrative?

Trust me.  I’m not anti-cop as some have labeled me.  BUT THERE MUST BE ACCOUNTBILITY and a serious search for the truth in all officer-involved shootings and or deaths instead of CYA’g and sweeping mistakes swept under the rug.  I don’t fault line officers having been there myself.  Mistakes will be made in the heat of the moment.  The key is to learn from these mistakes and to change police policy, procedure, and especially training when necessary to minimize them reoccurring and TO DISCIPLINE when necessary.

Our rules of engagement between civilian law enforcement in civil society are much different than those of our military in war zones. For example, clearing a building in a war zone where shooting is coming from is handled by throwing grenades in as the doorway is breached and most likely shooting through interior closed doors.  Read, On Sheep, Wolves and Sheepdogs by Lt. Col. Dave Grossman.

This is why the Deputy Audie case is so important to report.

Dep. Audie story is very relevant, and the consequences are potentially more dangerous to the public than what Shea has ever done or said. The local media has had this follow-story for many weeks but as of yet has failed to report it.  Why?

This was a cop with a history that was eased out of the Sheriff’s Department before the incident at Ferris HS occurred. Based on what I’ve read in media reports I see nothing wrong with Dep. Audie’s actions at Ferris HS.  During my LE career, I served as an SRO for two years.  But in the Berger death, Dep. Audie crossed the line and a person died because he played cowboy.  The same can be said for the shooting of Quinton Dodd. The Ryan Holyk case is very glaring re the reckless driving of Dep. Bodeman.   Dep. Bodeman only got a letter of reprimand.  A common thread in many of these cases is the demonization of those who died.

The Scott Creach shooting by Dep. Brian Herzel has some similarities albeit not from Dep. Herzel being a cowboy.  This shooting more likely stemmed flawed training and the routine use of unmarked police units for regular patrol and traffic enforcement.  In my opinion Dep. Herzel was startled by Creach appearing at his door post while parked at the Plant Farm Nursery.  Dep. Herzel kick his unit’s door open knocking Creach back and off balance. Det. Herzel unintentionally fired one round as he exited his vehicle because he didn’t index his trigger finger.

Had Dep. Herzel fired intentionally there most likely would have been three rounds fired. This was a tragic incident with both Creach and Dep. Herzel making mistakes that ultimately led to the death of Creach. Dep. Herzel, however, was untruthful about his actions when later interviewed by investigators.

The Otto Zehm death is a classic example of where our region in some areas is twenty years behind the times in LE best practices i.e., multiple in custody deaths in the jail.  The death of Otto was not caused by the head strikes with the baton by Ofc. Thompson but from the group take down, hogtying him in a prone position and sitting on him, applying the nonrebreathing face mask, and not paying attention to Zehm’s vital signs.  There is nothing wrong with a group take down.. We were taught many years ago not to prone out subjects once control is gained.  And then to turn them on their side and monitor their vital signs.  Of course, some subjects may die anyway but the actions of the officers would not be the direct cause of the subject’s death.

There is much more information to these two stories that as yet has not been reported. This is why I linked above to the very timely article by Victor Davis Hansen . . . Why is our local media not reporting? Is our media trying to further a preconceived narrative?

Links to documents listed above re separation of Dep. Audie from the Sheriff’s Dept: 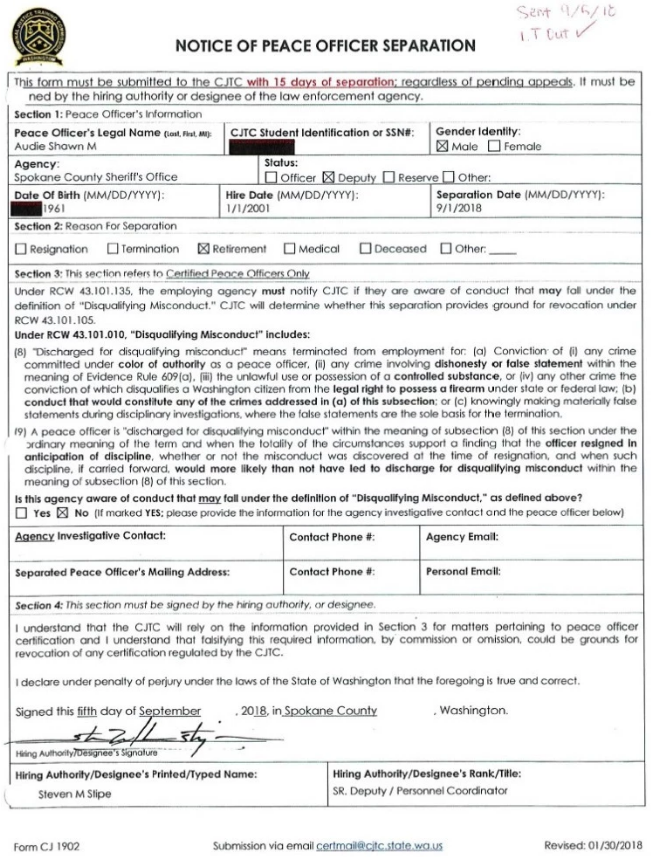 Letter of explanation for the correction by Dep. Stipe to CJTC to CJTC on 02-12-19