With the slow death of illegal Landscape Conservation Cooperatives (LCC), the regrouping of the organizations that comprised LCCs, and new funding from foundations for continued work, the pursuit of taking land continues.

The Western Governors Association (WGA) was established in 1984 and is comprised of Governors from the western half of the United States including 19 states and 3 US territories. Their mission includes addressing policy and governance issues, advancing “the role of western states in the federal government”, and strengthening social and economic factors in the region, including developing policy on natural resources, and the environment.

WGA creates a multitude of “resolutions” and “initiatives“, one of which cannot be found on their website, the 2008 Wildlife Corridors Initiative.  The initiative eventually established the Western Wildlife Habitat Council, which was responsible for creating the Crucial Habitat Assessment Tool (CHAT) for data collection.  Another tool for data collection by this initiative was the Decision Support System that maps all layers of the environment.  Just a brief summary, all of this established the framework for non-governmental organization (NGO) objectives to justify the creation of wildlife and other migratory corridors, identifying land for connectivity conservation, which ultimately leads to land that cannot be used and is government controlled.

This activity was accomplished without any voice from Idaho citizens.  Does anyone remember these activities being brought to Idahoans for consideration, or any legislation for the same?  Without going into depth on regionalism, this whole scenario is one fine example of how regionalism works and why it is so evil.  Regionalism is a group of unelected individuals making decisions that bypass our representative government at all levels.  This conglomerate of Governors, with their “collaborators“, have created, built upon, and established policy and direction for states to meet NGO objectives, without any citizen involvement.  It is also an absolute erasure of jurisdictional boundaries.  For those not familiar with regionalism, better start understanding this is how our government now works, not through representation or as a Republic.

Fast forward to 2019.  In the years since 2008, the WGA, federal government, and NGOs have collectively created the framework for migratory corridors, and now all of it just needs to be executed.  A celebratory love fest of accomplishments was recently held through the WGA Roundtable.

While several issues were part of the 2019 WGA Western Working Lands Roundtable, only one will be the focus here, Migration Corridors.  In each of the issue areas it should be noted the Roundtable consisted only of NGOs and several state and federal agencies, with no citizen representation.  That is how regionalism works, and NGOs are gearing up for the assault on state legislators to advance their objectives.

The panel essentially described how collared wildlife were used to identify the intensity of where migratory corridors exist, subsequently creating and funding “mapping teams” that have been “embedded” in each state to identify corridors.  “Partnerships” between states, federal agencies, NGOs, and industry were emphasized with a paltry nod to involving more land owners.  Exaggerated numbers of wildlife vehicle collisions were given for justification of using transportation as a way in which to improve wildlife connectivity.  It wasn’t just about wildlife corridors however, there was also emphasis on habitat that is needed for wildlife survival.  Bottom line on all of this, the agenda has already been predetermined and set.

One of the most pathetic parts was David Willms stating we “didn’t know migration routes existed until recently”.  What rock has he been living under?  Ask any person who lives in more rural areas when wildlife migrate and they can tell you the species, time of year, and where.  Since NWF is an United Nations NGO, and participant, Mr. Willms presentation was dripping with UN ideology pointing out corridors were an economic and “social responsibility” issue for “future generations”.  He also claimed “wildlife belong to everybody”, “tourists come from all over the world to see wildlife”, and world wildlife populations have decreased “50%”.  The Sage Grouse initiative was cited by Mr. Willms as the “blueprint” for corridors as it protected the habitat, stating it was a success.  Perhaps he doesn’t understand that poor land management as a result of that initiative resulted in the Soda Fire, destroying thousands of acres of land, not to mention the habitat and the grouse.  To suggest this as a blueprint for future corridors is reprehensible, and a ominous threat to Idaho. 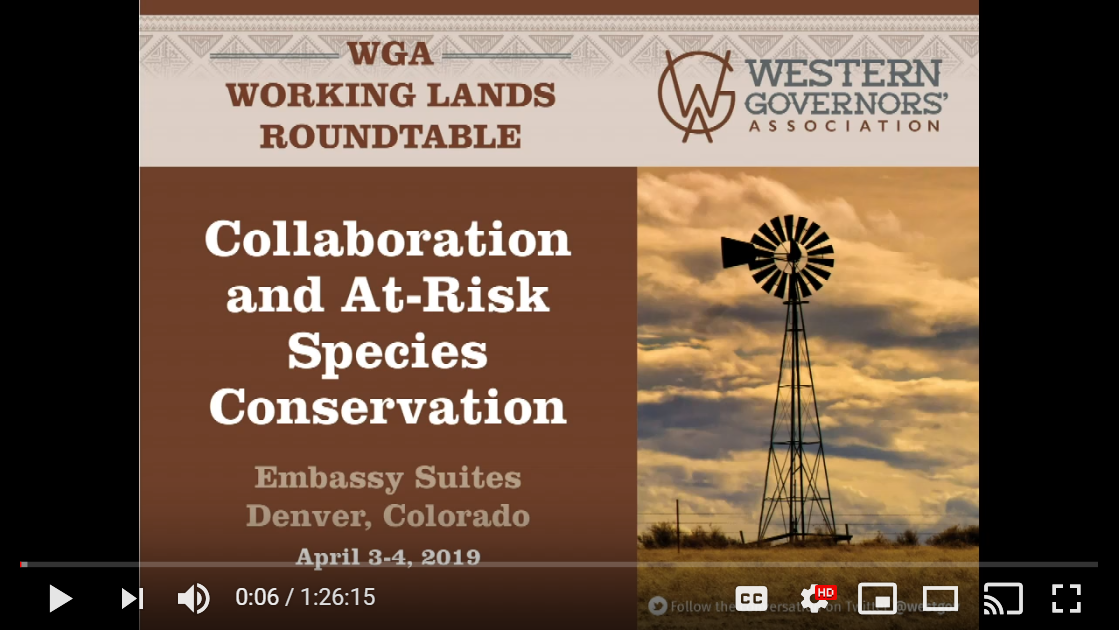 During the Roundtable on Coordination Between Federal Agencies, Kristin Thomasgard-Spence from the Department of Defense described their Readiness and Environmental Protection Integration Program (REPI) which buys land easements around military installations, citing “encroachment” as interfering with training.  Not to be left out, the U.S. Fish & Wildlife Services has their own land acquisition program (Pg LA-4), and recently published a federal register notice to collect private data on land owners, including financial information and social security numbers, to be used for future land acquisitions.  Of interest also is the panel discussion on Natural Resource Data Management and Landowner Privacy, which included the UN NGO Environmental Defense Fund, discussing the “mistrust” of land owners sharing information about their land, but once “relationships” are developed what wonderful work they can accomplish together.  Landowners beware, don’t fall for it, don’t allow them on your property for data collection, and don’t become friends with them.

They aren’t fooling anyone, no matter how they fluff it, the goal is taking as much land as possible for government and NGO control.

NGOs are reorganizing, one of which is the Center for Large Landscape Conservation (CLLC), having now become “global” with Idaho as a target, and openly admitting to their UN involvement.  CLLC recently announced their partnership with the National Caucus of Environmental Legislators (NCEL).  This partnership includes Idaho legislators who can be found here.  The CLLC goal is “developing legal policies and provisions to advance corridors and connectivity conservation areas at the international, federal, state, and local level.”  Get to know those Idaho legislators who are involved in this.

The destruction of our Republic with regionalism was given to us by WJ Clinton in 1993 with the establishment of the President’s Council on Sustainable Development (PCSD) which implemented Agenda 21.  Chapter 5 and 4 are rife with NGO and regional collaboration.   Federal and state governments, with UN created NGOs, are ONE, a trinity, blessing us by bestowing their gifts of taking more land for greater control.  There will never be ANY resolution to ANY land issue until this is exposed, confronted, and eliminated.

A very clear picture is described here about one agenda, how it began, its progression, who is involved, and how it is being accomplished.  This is only a small slice of one agenda, there are a malignancy of others.  The agenda is set, this is what they are doing, and NOTHING will change until Idahoans awaken to that fact.  It is not NGOs, the federal government, or state legislators.  It is these three groups working together against you, an oligarchy, that has already become YOUR government, and will continue to do so.  It is time to stop sitting back and waiting to see what will be done to us next.  Idaho is facing an even more ominous future if nothing is done to address the source of this problem.