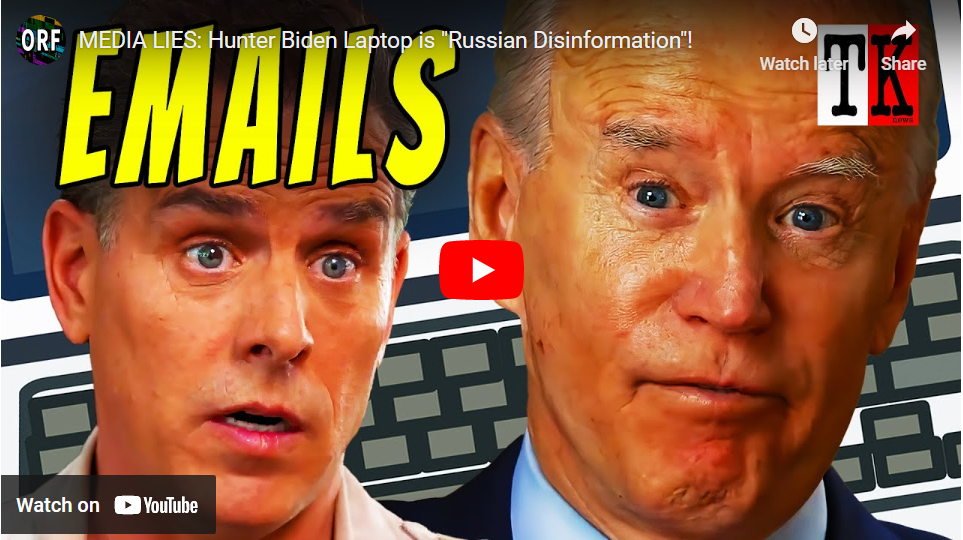 As subscribers by now are aware, I’m very upset about YouTube’s recent decision to censor a factually accurate video about “rigged election” comments produced for this site by Matt Orfalea. The company has given Matt a strike and labeled his/our work “misinformation,” an insult I’ve decided not to take lying down. I’m going to search for new ways to embarrass the company until they reverse their decision. As it happens, today offers an excellent opportunity.

CBS This Morning today came out with a story claiming they obtained a copy of Hunter Biden’s laptop, sent for an “independent forensic review,” and determined it “appears genuine.” This follows up confirmation from The New York Times back on March 16th, and more importantly, the exhaustive earlier work of Politico reporter Ben Schreckinger confirming key emails in his book, The Bidens. 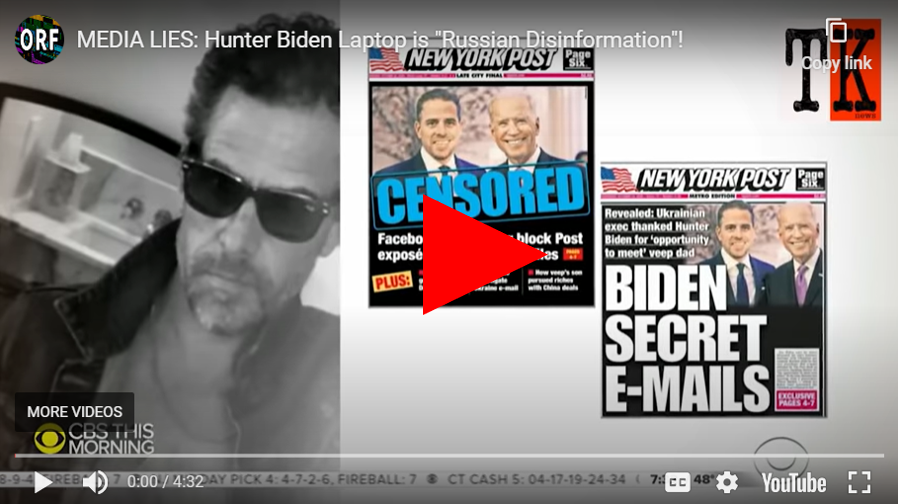 Matt did an exceptional job back in March in the video above, compiling clips of people who went on air and with absolute certainty proclaimed the laptop “a lie,” “altered or fake,” “pure distractions,” and of course, “RUSSIAN DISINFORMATION.”

Whether or not you thought the actual content of the story was important, the suppression of the Hunter Biden laptop affair was a crossroads moment in the history of modern censorship. YouTube played a major role in this event.

This was a case in which major news media — including CBS, NBC, PBS, CNN, and countless other outlets — actively embraced disinformation, in the form of a group letter from 50-plus former intelligence officials saying the laptop story (they referred to a “laptop op”) had the “classic earmarks of a Russian information operation.” All the aforementioned news agencies fell for this, as did Twitter (which blocked access to it, in what then-CEO Jack Dorsey later admitted was a “total mistake”) and Facebook (whose increasingly adrift founder Mark Zuckerberg later told Joe Rogan the story was throttled down at the suggestion of the FBI).

YouTube also pushed this disinformation campaign. It still does. Despite the total absence of evidence ever existing that the laptop was either fake or part of a Russian “information operation” and a growing pile of evidence that the laptop is real, YouTube continues to leave unmolested on its site countless videos promoting the conspiracy theory — that’s what it is, let’s be clear — that the laptop story is both bunk and an intelligence op.

3, US investigating if emails connected to Russia disinformation against Biden, CNN October 16, 2020 This is a beauty. Wolf Blitzer introduces correspondent Alex Marquardt by talking about how there are “fears that [the laptop story] could actually be part of Russia’s latest and very massive disinformation campaign in the US presidential election.” To which Marquardt answers, “Massive indeed Wolf,” before going on to “report” that “we are being told by two people who’ve been briefed on what the FBI is doing, that they’re looking into whether these unverified emails about Hunter Biden that were published earlier this week by the New York Post… are part of this bigger Russian disinformation effort in the 2020 election.” We have no proof this campaign existed, no proof this story was connected to it, and no proof of it being “bigger” than any other campaign. Unflagged by YouTube.

4. Bash On Pushing Of Disinformation On Biden: This Looks, Walks, & Talks Like Russian Intelligence, MSNBC October 19.2020 This piece is extraordinary because it’s almost exactly the same message as the one written by the 50 “former” intelligence officers. Nicolle Wallace starts off humorously, scoffing at the idea that someone is “suggesting somehow that Joe Biden is a corrupt politician — one of the most vetted politicians in this country.” Jeremy Bash, a former CIA chief of staff now posing as a media figure, concurs. “This looks like Russian intelligence. This walks like Russian intelligence,” adding that the laptop story “looks like a classic Russian playbook, disinformation campaign.” If you go back and look, you will find countless instances of reporters using words like classic, hallmarks, earmarks, and disinformation campaign.

5. Joe Biden on 60 Minutes, CBS. October 26, 2020 Remember, CBS just did a story contradicting their own earlier 60 Minutes piece in which Lesley Stahl berated then-President Trump that the laptop story “can’t be verified.” Indeed, CBS just by doing its new story proved that its previous position — that verification was impossible — was a lark. In their other 60 Minutes interview from that season, they soft-balled Joe Biden on the laptop story. CBS: “Do you believe [Hunter’s laptop] is part of a Russian disinformation campaign?” BIDEN: “It’s just what it is. It’s a smear campaign.”

There are plenty more of these. If you want to widen the criticism to Google, these “Russian disinformation” stories still pop up high in searches (see here, here, here, here, and here, for instance). YouTube and Google now become exhibit A in the ultimate truth about any attempt to “moderate” content at scale. If you make even a good-faith effort to weed out “disinformation,” relying on official bodies to help, what you’ll be left with is… official disinformation.

But this isn’t a good-faith effort to weed out untruths. YouTube has become a place that censors true content but traffics in official and quasi-official deceptions. It’s become indistinguishable from a state censorship bureau. If they feel they’re right about their decisions, they should be happy to explain themselves to people me. Until then, they can expect more love letters from this address.

Subscribers should know I don’t believe in letting things like this go, but I also don’t believe in annoying faithful readers. In the future, if there are similar entries in this campaign, I’ll make them public but won’t clog your email with notices. The idea is to be a pain in Google’s backside, not yours.

Matt Taibbi, author of the New York Times bestsellers The Divide, Griftopia, and The Great Derangement, was a contributing editor for Rolling Stone and winner of the 2007 National Magazine Award for Columns and Commentary.