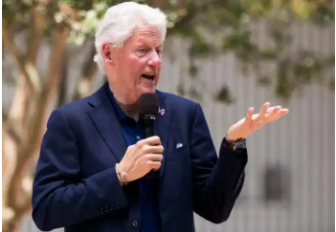 In a bombshell ruling, a federal judge has ordered dozens of documents that could expose the identities of Jeffrey Epstein’s associates related to visits to his Little St. John island in the Caribbean. In a ruling that came late last Friday, Judge Loretta Preska of the United States District Court for the Southern District of New York ruled the public interest in the documents outweighs the right to privacy.

Elon Musk posed the question this past summer on Twitter of the DOJ: 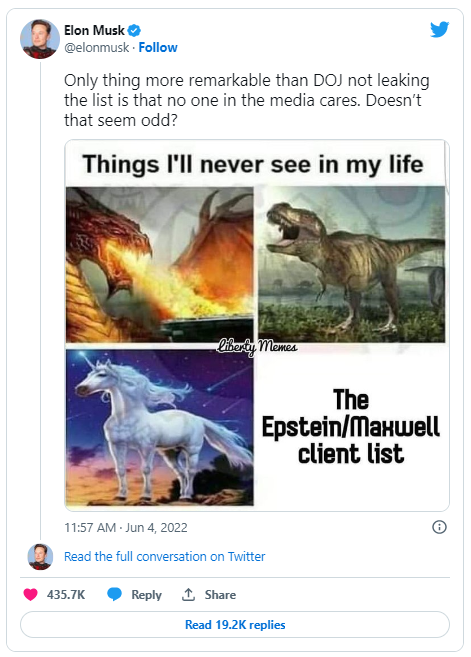 Judge Preska ruled material concerning the identities of eight people should be unsealed, despite one subject claiming it could “wrongfully harm (his) privacy and reputation.” Judge Preska overrode objections from billionaire Tom Pritzker, the executive chairman of the Hyatt Hotel chain, and ordered material related to him be made public. Tom Pritzker is a member of the powerful Pritzker family and cousin of Illinois Democrat Governor J.B. Pritzker who was just reelected to a second term.

Other tweets online pondered how Ghislaine Maxwell could be convicted of human trafficking for sex with juvenile victims without a client list of pedophile “Johns” as well?

Ghislaine Maxwell (60) was a British socialite and Epstein’s longtime companion. She is the daughter of the late Robert Maxwell, who amassed his fortune as a publishing tycoon of the UK. Maxwell owned the British Printing Corporation, Mirror Group Newspapers, and Macmillan Publishers, among other publishing companies. Robert was also a well-known member of the British Parliament.

Ghislaine Maxwell was convicted in late 2021 for sex trafficking of minors luring and grooming underage girls on the late financier’s behalf. A federal judge upheld her conviction in April. On June 28, she was sentenced to 20 years in prison but could have received up to 55 years for her crimes.

Those listed in the documents are powerful elites who have been battling in the courts to keep their identities hidden.

The documents in question are part of a defamation case which was brought against Maxwell by accuser Virginia Roberts Giuffre in 2016 that was later settled. The trove of materials have been released on a rolling basis after the first set was released in 2019 just two days before Epstein was found dead in his jail cell, after numerous requests from media organizations. Jeffrey Epstein was said to have died of a suicide by hanging in his New York City jail cell but a number of odd anomalies lead many to believe he was murdered by a contract killer hired by one of those who is named on the Epstein Client List.

A total of 16 “Non-Party Does” objected to release of these files to be made public and the first set of eight have already been dealt with by the Federal Court in New York, according to The Daily Mail. The latest batch, related to the remaining eight, refers to the individuals as John/Jane Does’ 12, 28, 97, 107, 144, 147, 171, and 183. Judge Preska said much of the “purportedly sensitive information” had already been made public last year during Maxwell’s trial for trafficking underage girls to Epstein. She ran through dozens of documents and ordered some them to be unsealed after her extensive review.

Judge Preska considered objections but declared that the public’s right to access to knowing those on the list outweighed any “generalized concerns” about privacy and the material was “not particularly salacious.” Judge Preska did make some concessions to some of the objectors. The logic of the judge seemingly holds that just because some flew on Epstein’s private jet “Lolita Express” and visited his Little St. John Island, does not mean they partook or knew of sex with minor children while there.

She said: “Certain details contained within certain documents that are not public…objecting Does have set forth a sufficient interest to preserve sealing.” Documents related to Doe 12 remained sealed as Judge Preska said that person was a “classic outsider.” Doe 12 is “peripheral to the events at issue” and is “neither victim nor associated with Epstein or Maxwell,” she ruled.

She concluded documents related to Doe 28 will remain sealed as they are a “victim of sexual assault who continues to experience trauma as a result of these events.” However, material related to Doe 147, who Judge Preska identified as Epstein victim Sarah Ransome, should be unsealed. Judge Preska reasoned Ransome was a “victim of sexual trauma and abuse” by Epstein and Maxwell but she already testified publicly at Maxwell’s sentencing. Additionally, Ransome published a book about her experience and wrote an op-ed in the Washington Post about it.

The judge did not set a timeline for when the material should be made public, but it will likely be weeks away. Unlike previous batches of documents, Maxwell did not oppose the release of these and thus had no representation in court.

Prince Andrew has already been exposed as a client in previous litigation by a victim Virginia Roberts Giuffre and former President Bill Clinton is well known for his 27 trips to Epstein’s island on his Lolita Express as per FAA flight log requirements. Pictures have been leaked to the Internet related to both of these men seen with underage girls as well.

“Who’s afraid of Ghislaine Maxwell? Everyone on this list”

Much of the credit of this breaking news goes to Slay News and they are to be both commended and thanked.

Mark S. Schwendau is a retired technology professor who has always had a sideline in news-editorial writing where his byline has been, “Bringing little known news to people who simply want to know the truth.”  He classifies himself as a Christian conservative who God cast to be a realist.  Mark is an award-winning educator who has published 7 books and numerous peer-reviewed trade journal articles some of which can be found on the Internet.  His father was a fireman/paramedic while his mother was a registered nurse.  He holds multiple degrees in technology education, industrial management, OSHA Safety, and Driver’s Education.  His personal website is www.IDrawIWrite.Tech.