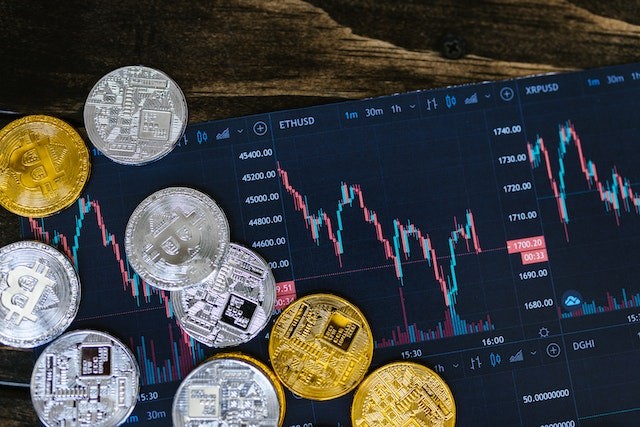 This, according to the new CEO of failed cryptocurrency exchange FTX, describes the company’s current standing after a liquidity crisis came to light early this month. Chicago-based attorney John J. Ray, III made the statement in a bankruptcy court filing issued November 17.

Ray is best known for overseeing the Enron bankruptcy proceedings in 2001, and has 40 years’ experience in cleaning up corporate collapses. Yet FTX is new territory for him.

“From compromised systems integrity and faulty regulatory oversight abroad, to the concentration of control in the hands of a very small group of inexperienced, unsophisticated and potentially compromised individuals, this situation is unprecedented,” he added.

The main culprit among this inner circle is 30-year-old Sam Bankman-Fried, an MIT graduate and former Jane Street Capital trader who founded FTX in 2019. Based in the Bahamas, the company billed itself as an exchange platform where investors could transact coins and tokens in the world of digital currency. But since early November, when the $32 billion on FTX’s books suddenly vanished into thin air, many have been speculating that the exchange may have been the largest Ponzi scheme in history.

Bankman-Fried, known colloquially in the crypto-world as SBF, resigned on November 11, the day FTX filed for Chapter 11 bankruptcy protection, as did its hedge fund Alameda Research and other affiliates. Besides ensuing investigations by the Department of Justice and the U.S. Securities and Exchange Commission, SBF and his cohorts — including several celebrity promoters such as Tom Brady and Larry David — now face a class-action lawsuit. It was filed on behalf of FTX token (FTT) purchasers and is represented by a team of attorneys including two high-profile lawyers who successfully led the U.S. government’s antitrust case against Microsoft in 2001.

Until its demise, FTX was the third-largest cryptocurrency exchange by volume, according to Reuters, and when it collapsed, digital currency news outlet Decrypt reported that overnight the entire crypto market lost billions, dropping below $1 trillion in value. “The consequences of FTX’s rapid decline and collapse will likely impact cryptocurrencies well into the future and could even drag down broader markets,” says Investopedia.

That could be the understatement of the century within more than the financial world. Robby Starbuck, who this year unsuccessfully campaigned as a Republican for the U.S. House in Tennessee’s 5th District, posits that the federal government will “use this as an excuse to advance their own digital currency to upend crypto. They’ll sell the government-backed digital currency by saying it will protect you. Their goal is for their currency to replace the dollar eventually and use it to track everything.”

“I’m convinced the eventual endgame with that currency is to tie a social credit system to it so you can’t spend money if you’ve said or done anything that the ruling class finds offensive,” Starbuck continued. “Sam will have helped create that reality with the mess he created with FTX.”

That is not just conspiracy-theory drivel. China’s social credit system has been rating citizens since 2014. Those who misbehave — according to the government’s definition of that word — are penalized in various ways. For example, they may “pay higher rates for electricity, may not be able to purchase high-speed Internet service, may not be able to get their kids into better schools, or — in some cases — [may be] banned from leaving the country on either business or pleasure,” relates C. Mitchell Shaw for The New American. He warns that Silicon Valley is already crafting a similar scoring system for the U.S.

But is it too outlandish to postulate that SBF orchestrated the demise of FTX on purpose? Reporting for Vox, Kelsey Piper pointed out that, “Before his empire collapsed, Bankman-Fried was actively engaged in lobbying in Washington for a regulatory framework for cryptocurrency.” In tweets last week with Piper, SBF reversed his stance, saying that regulators “make everything worse” and that “they don’t protect customers at all.”

Part of his company’s collapse is blamed on his hedge fund, Alameda Research, investing “the deposits of crypto account holders on the exchange.” SBF insisted to Piper that FTX never made such investments, a technically correct but duplicitous statement, since Alameda was the entity that gambled with the deposits. He claims that those speculations were “never the intention” and says he was taken unawares. “Sometimes life creeps up on you,” was his excuse.

But risky speculation is only the tip of the iceberg. When Piper asked him about the hundreds of millions of dollars transferred out of the company shortly after FTX filed for bankruptcy, SBF tweeted: “hack … either ex-employee, or malware on an ex-employee’s computer… a few hundred M.”

Prior to all of this, the company website claimed (and still does) that FTX had “successfully undergone a US GAAP [generally accepted accounting principles] financial audit for 2021.” CoinDesk further reports that the “2020 and 2021 FTX US audits were performed by New York City-based firm Armanino,” while the company’s international arm, FTX Trading LLC, “worked with auditing firm Prager Metis.”

Now in a glaring spotlight, these organizations seem anything but transparent. The Deep Dive reveals that neither Prager Metis (a private firm that claims more than 100 partners and principals) nor Armanino (which bills itself as a top-25 U.S. accounting and consulting firm) identifies any of its clients publicly, and a Google search for the names of clients turns up nothing.

However, both companies’ oversight failure allowed FTX to release financial documents as recently as three months ago that showed a robust $1.02 billion in 2021 revenues and $2.5 billion in cash as of the end of last year.

Despite mainstream reports, not all of FTX funds were squandered in risky speculation or lost to hackers. SBF “was a major contributor to Democratic candidates during the midterm election cycle, funneling most of his donations through a little-known political action committee (PAC),” tattles Fox Business.

However, SBF apparently has a genuine interest in pandemics, too, having also established a nonprofit called Guarding Against Pandemics and hiring his brother, Gabe, a former Wall Street trader and Democratic congressional staffer, to run it.

It is not hard to guess the agenda of his nonprofit. SBF has been a major funder of Brazil’s ongoing TOGETHER Trial, launched in June 2020, which quickly concluded that ivermectin is not effective against the Wuhan virus. This is the oft-quoted trial used by bureaucrats and policy makers in promoting the Covid jab. (What they ignore is the fact that after further review of the study’s raw data, researchers expressed support for the drug “because the results of the TOGETHER Trial suggest that ivermectin actually did benefit the Brazilians in the treatment group — results that are in agreement with 87% of the other clinical trials that tested ivermectin,” as published in the Summer 2022 issue of the Cato Institute’s peer-reviewed journal Regulation.)

Yet SBF’s Covid activism is only one link to D.C. power brokers. 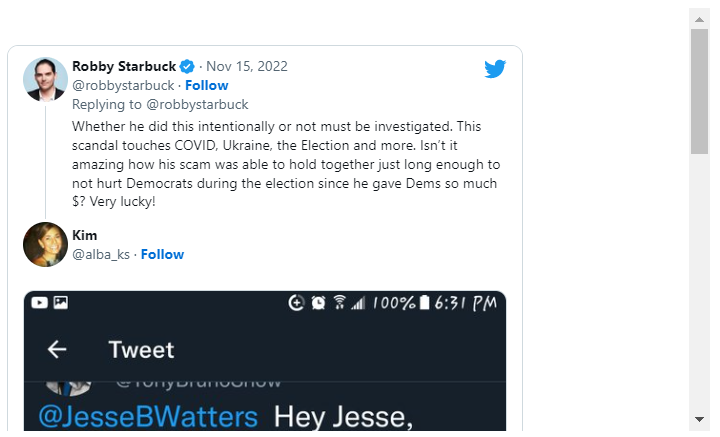 The Gateway Pundit posted this video of Congresswoman Maxine Waters (D-Calif.), supposedly blowing a kiss to SBF after he testified before her House Financial Services Committee last year. Though it looks more like she was blowing a kiss to the person standing to his right, it is interesting that she and ranking committee member Rep. Patrick McHenry (R-N.C.) will now lead a bipartisan investigation into FTX. 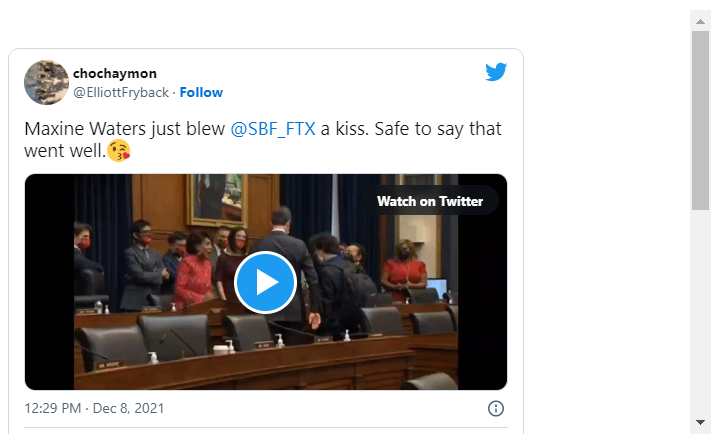 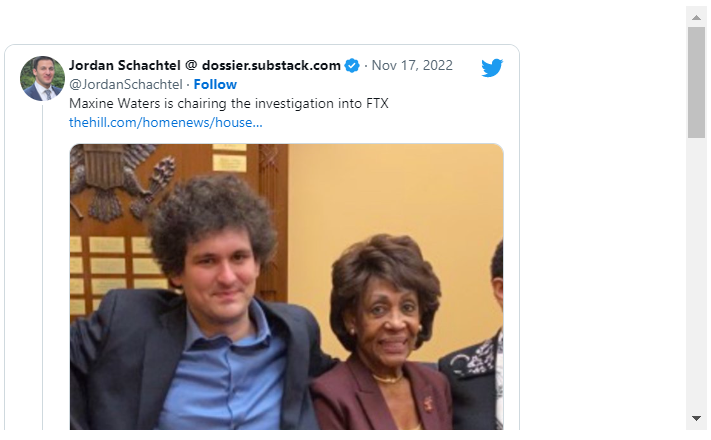 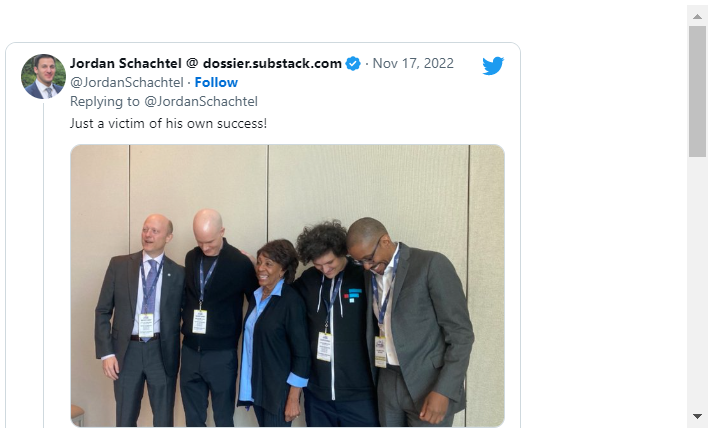 Waters’ plans are predictable. “We need legislative action to ensure that digital assets entities cannot operate in the shadows outside of robust federal oversight and clear rules of the road,” she said in a committee press release. “I look forward to holding this important hearing and uncovering all that Congress must do to ensure this never happens again.”

However, many caution that increased federal regulations will only shackle free-market Bitcoin and help the federal government launch a central bank digital currency (CBDC) and a Chinese-style social credit system, as Starbuck warned. There are already laws in place to address criminal activity — laws against fraud, counterfeiting, and money laundering, all charges that SBF is facing in the court of public opinion.

Dr. Steve Turley of Eastern University is a whistleblower in this regard. He runs a blog, TurleyTalks, and posted a video about the FTX “scandal” in which he explains that SBF spent $10 million on Joe Biden’s 2020 presidential campaign, and — except for George Soros — has since become the single biggest contributor to Democrats.

Turley reveals that FTX had issued many counterfeit tokens to artificially prop up its own market value and appear more liquid. This practice was discovered during investigations by the largest crypto-exchange platform, Binance, in anticipation of a merger with FTX. When Binance backed out of the deal, investors got nervous and caused a run on FTX, which was then forced to admit its lack of funds.

According to Fox News, the partnership involved the Ukrainian Ministry of Digital Transformation, FTX, and the Ukrainian web company called Everstake….

The Post Millennial is reporting that on March 16, just two days after the Ukraine-FTX partnership was announced, Biden gave an additional $800 million to Ukraine. And, of course, as of this month, that has accumulated to an astonishing, and frankly unprecedented, $60 billion of aid to Ukraine.

So now, with the revelation of the so-called partnership between FTX and the Ukrainian government — the very government that received billions upon billions of American taxpayer funds — the question that is arising is obvious. How much of those taxpayer funds ended up funneled back into FTX, which of course turned around, and funneled tens of millions of dollars into Democrat coffers? 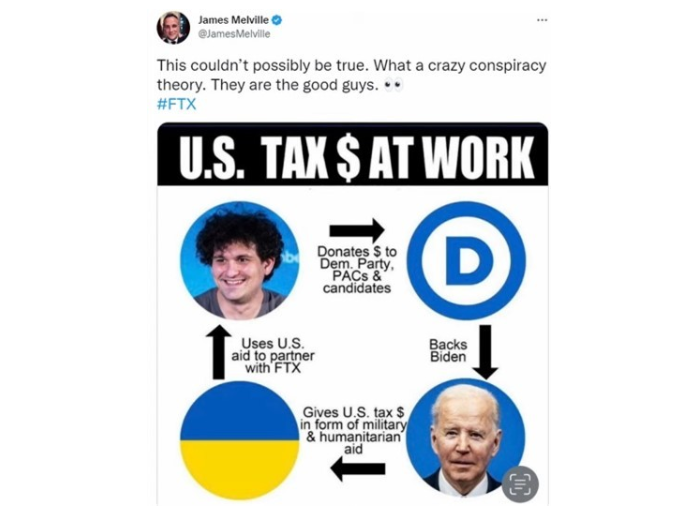 “It’s insane how deep this all goes,” opines Starbuck. “FTX was using customer funds to prop up left wing politicians and causes through their CEO Sam Bankman-Fried and different entities he created. He also oversaw the destruction of a crypto giant that guarantees a government crypto crackdown.”

Starbuck also asks, “Isn’t it amazing how his scam was able to hold together just long enough to not hurt Democrats during the election since he gave Dems so much $? Very lucky!” 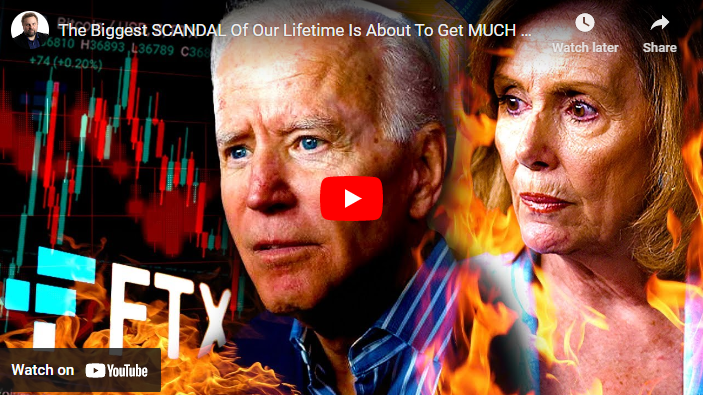