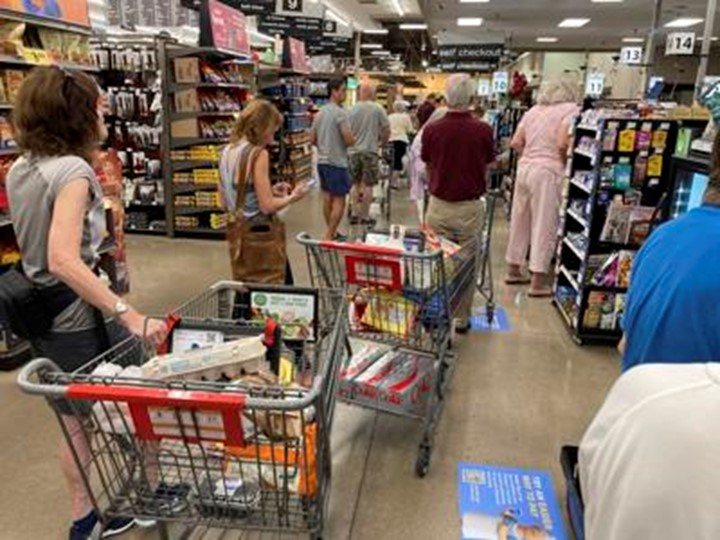 In this Thursday, Aug. 25, 2022, photograph, shoppers queue up in long lines to check out of a King Soopers grocery store in southeast Denver.

The U.S. Bureau of Labor Statistics reported that consumer prices rose 0.4% in the month of October.

“The index for shelter contributed over half of the monthly all items increase, with the indexes for gasoline and food also increasing,” BLS said in its report. “The energy index increased 1.8 percent over the month as the gasoline index and the electricity index rose, but the natural gas index decreased. The food index increased 0.6 percent over the month with the food at home index rising 0.4 percent.”

This rise was less than expected for the month.

“The index for all items less food and energy rose 0.3 percent in October, after rising 0.6 percent in September,” BLS said in the report. “The indexes for shelter, motor vehicle insurance, recreation, new vehicles, and personal care were among those that increased over the month. Indexes which declined in October included the used cars and trucks, medical care, apparel, and airline fares indexes.”

Food and energy, though, have far outpaced the price hikes of other items, putting a strain on Americans’ budgets.

“The energy index increased 17.6 percent for the 12 months ending October, and the food index increased 10.9 percent over the last year; all of these increases were smaller than for the period ending September,” BLS said.

Republicans blasted President Joe Biden for the higher prices, a familiar message as inflation has hit the highest level in four decades and gas prices hit an all-time high earlier this year.

“Everyday life is too expensive for working families in Wyoming and across the country,” said Sen. John Barrasso, R-Wyo. “Costs remain at a 40-year high because of wasteful Washington spending and a war on American energy led by Joe Biden. We can lower costs by unleashing American energy, cutting punishing regulations, and stopping runaway government spending.”

Casey Harper is a Senior Reporter for the Washington, D.C. Bureau. He previously worked for The Daily Caller, The Hill, and Sinclair Broadcast Group. A graduate of Hillsdale College, Casey’s work has also appeared in Fox News, Fox Business, and USA Today.