Trump: We Know Him by His Enemies 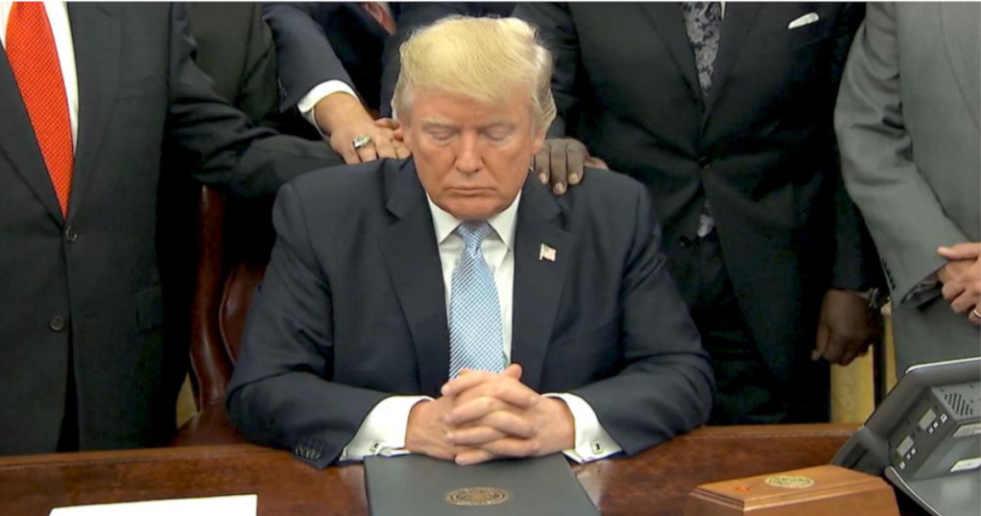 Trump: We Know Him by His Enemies

To a degree unique in American history, President Donald J. Trump has confronted – and been confronted by – an enemies list that, well, only Satan could come up with.  This includes the CCP, the WEF, the CIA, the FBI, central banks, multi-national banks and corporations, the tech industry, and virtually all of the “Fourth Estate” … not to mention, most of his own political party, the Republicans.

This jihad began from the moment he came down that golden escalator, and announced he was running for office.  It escalated once he pulled the surprise (Divinely orchestrated?) victory in the 2016 election.

That opposition has extended far beyond legitimate political partisanship or opposition.  No, it’s included all of sabotage, defamation – and treason against our nation.  Not the least of which was the coup of November 3, 2020.  Enemies foreign and domestic have collaborated with all of this.

It continues to this day.  As this is written, tabulation of results for the 2022 midterm election is still underway.  Yet before midnight struck on election day, an apparently pre-planned and synchronized cacophony of media and pundit exclamations that the disappointing Republican results were the fault of Donald Trump, that he’s over, and that Ron DeSantis is to be the savior of the Republican Party in 2024.

There have been disturbing signs about Ron DeSantis.  Jeb Bush and Paul Ryan have spoken positively about a possible Presidential run by him.  Those are giant red flags.  And Mr. DeSantis – just like the national Republican “leadership” – has been MIA regarding the election machines (not to mention that Florida is still in the ERIC voter registration system).  So, lynchpin elements of voting fraud infrastructure remain intact in Florida.

This is not to conclude that Ron DeSantis is a Trojan Horse for the Republican Establishment (and its globalist and CCP influences behind the curtain).  It could be that his heart is MAGA, and he’s tactically stringing them along so as to not to kill a 2024 or 2028 run in the crib.  But these things we know:

A Trump-DeSantis ticket in 2024 would be lethal to whoever the Democrats put up against it. And if DeSantis is truly MAGA at heart, four years of President Trump (reclaiming the four years stolen) would provide four years of MAGA progress, a springboard for eight years of “President DeSantis.” (P.S. Under such a scenario, “DeSantis-Lake 2028” sure has a nice ring to it!)

DeSantis is young.  If he doesn’t wish to be on a Trump ticket for whatever reason(s), he can easily fulfill his term as FL Governor, and continue to build momentum for a 2028 run;

Either of the above two scenarios would avoid a 2024 primary fight within the GOP, that would like lead to a loss in the general election of 2024 (which would harm DeSantis as well, but would please the globalists and the CCP);

If DeSantis really is MAGA at heart, and governs as such, the same forces of the Republican Establishment / globalists and CCP will work just as hard to neutralize his administration, and electorally (or use impeachment) to take him out.  In which case, we will have lost both a proven and effective MAGA warrior, and set the stage for the demise of his understudy;

Conversely, if Ron DeSantis is a “pragmatist,” i.e., Trojan Horse for the GOP Establishment, we’ll have jettisoned our true MAGA warrior … and probably irreversibly cemented our nation’s decline into the dystopian abyss of the WEF and it’s “Great Reset.”

Some believe that President Trump was chosen by God for His purposes (as have been many humanly flawed individuals throughout history).  Whether one subscribes to that, or not, it is inarguable that in total – if not individually – his enemies represent Satanic evil.  The evil of the CCP is self-evident. The evil of the globalists – in public represented by Klaus Schwab and Noah Harari, with their “Great Reset” visions of a global “sustainable” nirvana – is merely a repackaged presentation of a Satanic “heaven on earth.”

True, many – perhaps most – of these characters have no clue that they are minions of Satan, and acting as his agents.  Many them don’t believe in God or Satan to begin with, so won’t comprehend the role they’re playing.  Others know full well what they are doing, and who they are serving.  In any case, who of you wants to enlist with them?

The old phrase “an enemy of my enemy is my friend” applies here.  Even if one dislikes President Trump – perhaps because of his at times caustic manner, or “mean tweets” – an “enemy of the minions of Satan is my friend.”

President Trump has proven his mettle under (proverbial) fire; he has endured much in furtherance of a righteous cause – MAGA – intended to save or Divinely-inspired nation.