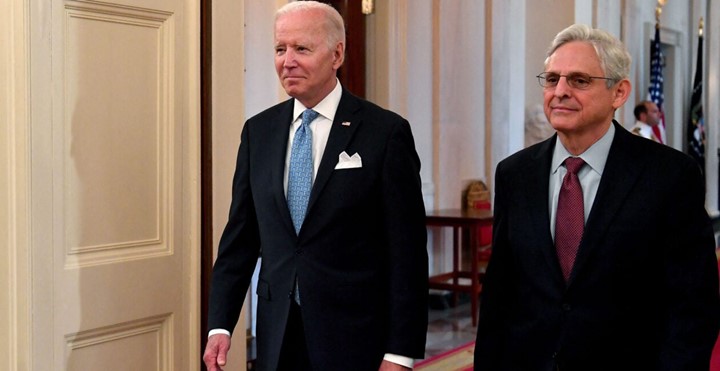 The Justice Department argues that it would cause “public confusion” to release information on President Joe Biden’s order to agencies to register voters. Pictured: Biden and Attorney General Merrick Garland enter the East Room of the White House on May 16. (Photo: Nicholas Kamm /AFP/Getty Images)

In a filing late Thursday, the Justice Department argues that releasing information on President Joe Biden’s order would cause “public confusion.”

The Foundation for Government Accountability, a conservative watchdog group, sued the Justice Department in U.S. District Court for the Middle District of Florida to get information about how the department would implement Executive Order 14019, which Biden signed in March 2021.

As previously reported by The Daily Signal,  Biden’s order requires every federal agency to promote voter registration and voter participation.

The Foundation for Government Accountability sued in April under the Freedom of Information Act, and the court ordered the Justice Department to produce documents by Sept. 8. The department partially complied by the deadline, but produced only 135 pages out of what the foundation anticipated would be more than 5,000 pages.

Many of the released documents were heavily redacted, and the Justice Department did not produce the 15-page “strategic plan” for implementing Biden’s order.

“It’s clear his administration has weaponized DOJ to hide records and is using the legal process to run out the clock before the midterm elections,” Tarren Bragdon, the foundation’s president, said in a prepared statement.

“DOJ offered flimsy excuses to justify concealing key information regarding their participation in government-funded ‘get out the vote’ efforts,” Bragdon said. “FGA will not stop fighting to uncover these records and expose the full scope of the Biden administration’s mass voter registration scheme.”

The Justice Department filed a motion for summary judgment arguing that the documents should be withheld from the public. Government lawyers argued that the records are protected from the nation’s open records law under “presidential communications privilege.”

“To qualify for protection under this privilege, material must be inter- or intra-agency, and both pre-decisional and deliberative,” the Justice Department motion says.

The government document goes on to say that disclosure also would deter Justice Department employees from “providing a full range of options, plans, or propositions for future potential actions out of concern for creating … public confusion.”

The Justice Department argues in the motion:

And such public confusion would result from disclosure of the Strategic Plan because it contains many proposed actions that the public might construe as ‘future commitments, past actions, or provisions already in place. DOJ therefore properly withheld the Strategic Plan in its entirety.

The Justice Department did not respond to The Daily Signal’s request for comment for this report by publication time.

Numerous House Republicans have sought information about the documents related to Biden’s order telling government agencies to register voters. Critics have said the order could cause federal employees to engage in illegal activity by participating in elective politics.

Earlier this week, nine House Republicans signed onto a letter to Attorney General Merrick Garland, who heads the Justice Department, asking for release of the agency’s strategic plan and referencing the Foundation for Government Accountability’s  lawsuit.

“The DOJ’s reputation with public trust is already minimal at best,” Rep. Ralph Norman, R-S.C., said in a prepared statement. “What could the DOJ have to gain from hiding their plan to promote voter participation from the public?”

“American voters have a right to know what the DOJ’s planned role is in our election,” Norman said. “The federal government should abide by the Hatch Act and keep their hands out of our election process.”