The United States has been overthrown 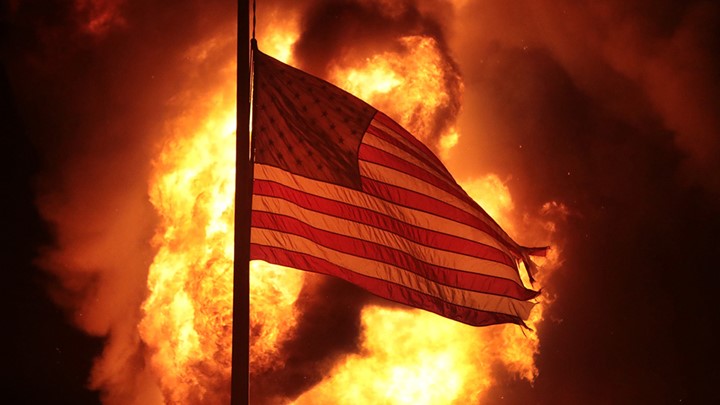 The United States has been overthrown

The Tenth Amendment was lost to Abraham Lincoln. George W. Bush got rid of habeas corpus in the name of national security when he declared that the “terrorist threat” gave him the power to hold American citizens indefinitely without presentation of evidence to a court, without trial and conviction. And he did. Obama one-upped Bush. He said he could execute American citizens on suspicion alone without due process of law. And he did. Bush and Obama were not held accountable for their violation of the US Constitution.

Today free speech and association are dead letter rights. Everyone can now censor our free speech–employers, school boards, people claiming they are “offended,” social media, print and TV media. People who say something “offensive” can be erased and never heard from again. What this means is that whoever controls the right to be “offended” can cancel the free speech of those who cannot claim to be “offended.” Without free speech, there is no debate, just the imposition of approved views.

In Woke America, this is the situation today.

You can also tell a coup has occurred when traditional patriots like Make America Great Again Trump supporters and Oath Keepers are demonized by media and government officials as “domestic extremists,” persecuted, and imprisoned on false charges, such as the Americans who attended a rally in support of Trump and were turned, with Republican complicity, into “insurrectionists” who tried to seize control of the government by taking selfies of themselves sitting in Nancy Pelosi’s chair.

When something so juvenile can be designated an insurrection, you know a coup has occurred. The message is clear. Those supporting the established order against the coup that is being imposed are enemies of the people.

You can also tell a coup has occurred when perversity of all kinds, particularly sexual, is celebrated and normality is derided as “fascism” or some form of phobia or other word of abuse. When the moral high ground is held by LGBT– people who cannot reproduce–and nature’s norm of heterosexual is regarded. as an unjustified definition of normality, the natural order has been overthrown.

That’s where we are today. Soon pedophilia will be declared normal, and there will be brothels where formerly depraved people, now normalized, can have sex with children.

Impossible, you say, but not, for once one perversity is legitimized, all others follow, as we have experienced. It is just a matter of time. Once the rot starts, it doesn’t stop until the job is finished.  We already have one foot in Sodom and Gomorrah, and the other foot is drawing nearer.