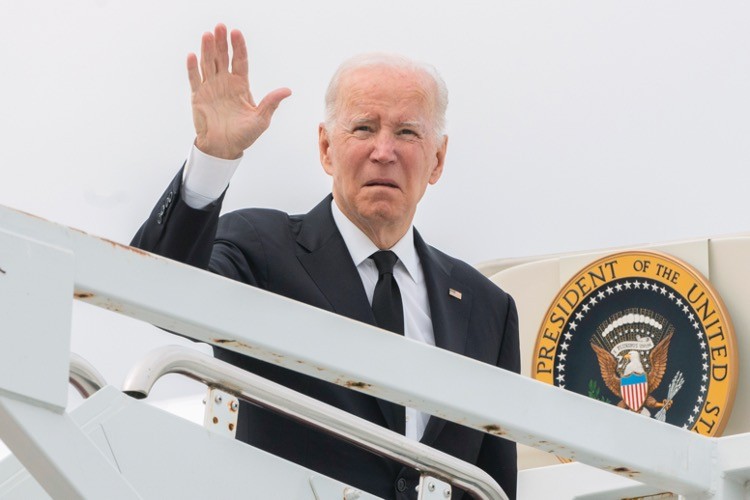 What does an invasion look like? Vladimir Putin is giving us one vision of it in Ukraine. Here’s another:

Approximately 2.7 million illegal aliens have been “encountered” at our borders this year, bringing the total during Joe Biden’s one-year, eight-month tenure to a staggering 5.5 million.

What’s more, 2.4 million illegals have either been released by federal authorities or have snuck into our country’s interior undetected, according to an analysis of U.S. Customs and Border Protection (CBP) data.

In other words, the feds are sending money to foreigners overseas while facilitating other foreigners’ invasion of our nation — the effects of which cost us more than $100 billion dollars yearly. So it’s clear what our government’s priority is (i.e., not us).

“In typical fashion, the Biden administration attempted to conceal the reality of a historic crisis they created by releasing final FY 2022 border numbers late on a Friday evening, hoping in vain that no one would notice on the eve of consequential midterm elections. After digging through them, we can see why,” said Dan Stein, president of [FAIR].

“Some 2.7 million migrants — those who illegally entered or were otherwise inadmissible at a port of entry — were encountered at our borders in FY 2022, bringing the total under President Biden to a whopping 5.5 million. One thing is clear: These record-breaking numbers are a direct consequence of open-borders policies implemented by Homeland Security Secretary Alejandro Mayorkas and the person who appointed him, President Joe Biden,” charged Stein.

… “Nothing will improve until there is a public servant leading the Department of Homeland Security (DHS) who believes in borders — and secure ones at that. We cannot even begin to reverse this disaster so long as our nation’s immigration policies are in the hands of someone who is bent on compounding it…. President Biden needs to clean house at DHS, and, if he is not prepared to do it, Congress needs to clean it for him, beginning with the impeachment of Secretary Mayorkas,” Stein concluded.

Unfortunately, the problem goes far beyond Mayorkas, who, though odious and corrupt, is a symptom as much as a cause. He merely reflects a globalist, immigrationist establishment — which includes virtually all office-holding Democrats and many Republicans — that apparently welcomes illegal migration. Of course, an onus also belongs on the people who elect them.

To put the current illegal-migration numbers in perspective, 5.5 million is more than the population of Ireland, New Zealand, Norway, Singapore, or Costa Rica. The 2.4 million migrants who’ve entered our interior is more than the equivalent of absorbing Latvia, Slovenia, or Gabon into our country — or Estonia and Cyprus combined. It puts a new light on the phrase “creating a nation within a nation,” huh?

As for perspective on how much worse the situation has gotten, note that 199,976 illegal migrants entered the United States in July, “a 325 percent increase over the average number of July apprehensions under the Trump administration,” wrote FAIR in an August report.

It’s not just people crossing our border, either, as illegals facilitate illegality. For example, “2,071 pounds of fentanyl, the equivalent of 469 million lethal doses, and 12,989 pounds of methamphetamine were seized at the southern border in July alone,” wrote Breitbart August 20.

In addition, Border Patrol has also encountered 98 known or suspected terrorists thus far this year. It took only two terrorists to kill 14 people in the 2015 San Bernardino Muslim jihad attack, mind you.

Yet the fentanyl problem may not bother the immigrationists much. After all, the drug’s victims are mainly the type of people they care about least: native-born citizens. This antipathy goes back a long way, too.

Just consider, for example, the 2006 testimonial of Fredo Arias-King, ex-aide to former Mexican president-elect Vicente Fox, relating what he heard while meeting with 50 American legislators back in 1999 and 2000. He said that 45 of them — both Democrats and Republicans — knew that our current immigration regime had negative consequences, but didn’t care. For they believed that in a “new,” immigration-forged “United States, political uncertainty, demanding constituents, difficult elections, and accountability in general would ‘go away’ after tinkering with the People.”

“I remember few instances when a legislator spoke well of his or her white constituents,” Arias-King also related. “One even called them ‘rednecks,’ and apologized to us on their behalf for their incorrect attitude on immigration. Most of them seemed to advocate changing the ethnic composition of the United States as an end in itself.” And, of course, the United States has experienced a by-design demographic transformation during the last 54 years of unprecedented proportions.

This is why the pseudo-elites hate President Trump and his supporters so much: internationalists naturally despise nationalists.

The good news is that the GOP has been undergoing a bit of a transformation itself in recent years, with MAGA-oriented, nationalist candidates holding an increasing number of offices. Will this process continue November 8? That, and the fate of our nation, are up to us.