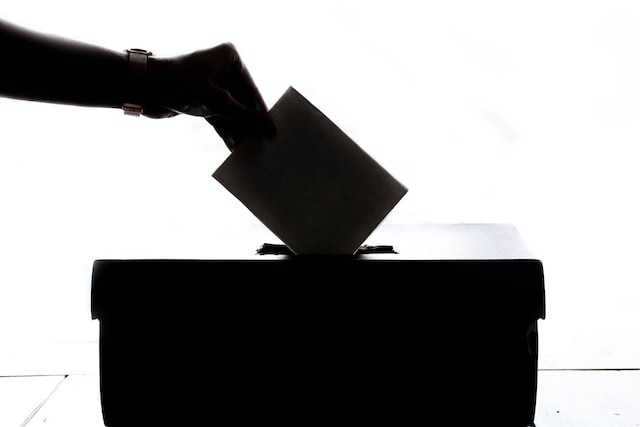 The recent arrest of Eugene Yu, the founder and CEO of election software company, Konnech, Inc. for betraying Los Angeles, the largest metropolitan area in America, charged with transferring election poll worker information to China is just the tip of the iceberg of CCP subversion efforts to destroy the United States.  This arrest of Yu on the grounds of a security breach with China and on charges of embezzling funds—is a wakeup call for all polling place administrators in the U.S. regarding the upcoming mid-term elections. They need to unplug and shutdown Konnech, Dominion, ES&S and other electronic voting systems. All have been plagued with erratic vote count problems and are vulnerable to being hacked and manipulated.

The Konnech scandal has been initially suppressed by an assumption that it was a limited breach of personal data of election workers in one location in the U.S. But in Australia and Canada, where Konnech operates through subsidiaries, the company has been involved in electoral roll data, voter I.D. confirmation, the scrutiny of provisional and postal votes and access to defined elector records. This appears related to why both of those countries experienced election irregularities and veered to the left politically. Governing authorities that gained power in Australia and Canada during the period that Konnech was involved in managing elections ended up embracing communist-type policies, such as forcing citizens into quarantine camps and cutting off people’s access to their bank accounts.

We are reminded of the adage of the communist tyrant Stalin who said, “It doesn’t matter how many people vote, only who counts the vote.”

Americans now increasingly understand that the Covid-19 virus was more hoax than pandemic—conceived in China as a manmade virus and then released to the world, but with the primary target being the United States. No surprise that it was pulled off in the 2020 election year so as to end the presidency of Donald Trump, the first president to resolutely stand up against the China threat. Media-hyped fear precipitated dramatic responses, with left-leaning politicians and governors in the United States also adopting Chinese-style lockdowns of cities, and unprecedented violations of the people’s Constitutional rights that included mask mandates, isolation, closures of schools, churches, synagogues, and small businesses. All of this served to divide Americans, to set back the education of children and create problems with parents, to halt economic activity and advance a preference for socialism by paying people not to work—financed with money printing that proved inflationary and was compounded by inevitable supply chain shortages resulting from work stoppages.

Welcome to the new dysfunctional norm in America—all courtesy of the Chinese CCP.

The virus fear factor made the CCP plan easy to pull off. Democrat Party operatives and lawyers canvassed key “battleground” swing states to change local voting rules to expand the use of mail-in ballots and ballot harvesting. Ballot harvesting was made exponentially more widespread and productive by expanded use of drop boxes in key urban Democrat districts—courtesy of $400 million from the high-tech billionaire, Mark Zuckerberg, whose leadership of Facebook (FB) had already proven feckless and late in preventing the Chinese CCP from manipulating the FB platform for propaganda purposes.

With this type of voting being prone to fraud, was it really any wonder why people cried foul? Everyone remembers watching TV coverage of the coordinated interruption in all the battleground states of vote-counting late in the night of November 3rd election day when Trump was leading with significant margins. Later people would learn that vote counting had resumed in the wee hours with no or limited supervision when it was easy to get a jump on feeding fake ballots into the system. By the morning news cycle, Trump’s margin narrowed and disappeared with Biden votes rising like a hockey stick in the Democrat-run swing states—in large part courtesy of mail-in and “harvested” ballots being run and even rerun through the vote tally machines.

It’s worth noting that all the major voting machine technology contractually employed in America use Chinese-manufactured parts, which can provide “backdoors” to being hacked for the purpose of data manipulation and/or transfer. This was the very reason Trump’s FCC banned all Chinese Huawei telecommunications equipment in the U.S.

In the 2020 elections it’s also noteworthy that Dominion Voting Systems were being used in every battleground swing state, with charges arising that Dominion played a role in altering votes. At that time, Dominion listed Chinese Bank HSBC as their collateral agent for eighteen different patents pertaining to the handling of ballots and votes through the controlling process, including ballot imaging processing, terminals, security, keypads, and tabulating programs. Eric Coomer, then vice president of U.S. engineering at Dominion, who was also involved with Antifa,  admitted on social media to rigging Dominion voting machines in order to prevent President Trump from winning reelection, telling one group:  “Don’t worry about the election; Trump’s not gonna win. I made f***ing sure of that!”  It’s also noteworthy that Georgia under the governorship of Brian Kemp in 2020, had extraordinarily friendly ties with the Chinese CCP, with some arguing that Georgia’s adoption and deployment of Dominion voting machines statewide was a key factor in shifting votes from Trump to Biden in that critical state.

Discussion of Chinese influence in U.S. elections would not be complete without also mentioning that China is the top source of counterfeit driver’s licenses that have been seized by Customs and Border Protection agents that are intended for a variety of purposes, including voter fraud. Also noteworthy is the role of pro-Beijing leftists involved with the Chinese Progressive Association in America called “Seed the Vote,” whose purpose is to mobilize votes for the Democrat Party.

In conclusion, we all got accustomed to vote fraud affecting elections in Third World countries, and we assumed that it could never happen America. Our numerous and egregious election irregularities two years ago blew up that notion for good. Some election reforms in some states have been made, but law and order in America has also sharply deteriorated in the last two years, with mob behavior and criminal elements emboldened—confident that they can break the law with no consequences.

Our best answer is to vote at the polling places in overwhelming numbers no matter what obstacles or false flags are put in our way. And our success will be greatest when we reach out to family members, friends and associates who might not understand the stakes. Exercising the right to vote is still our best course to stop the internal and external enemies of liberty that are closing in all around us.

If we fail to mobilize overwhelming numbers to exercise the right and duty to cast ballots for life, liberty and the pursuit of happiness, our children may never have that right again. Three of our first five presidents all died on the same day, July 4th — a clear sign from God that liberty is one of his greatest gifts and that we will keep his blessing if we protect it. One of those, the second President John Adams, reminds us that “Liberty once lost, is lost forever.” Let’s be vigilant to stop vote fraud and deliver an overwhelming honest vote for liberty this mid-term election.

Scott Powell is thinker, analyst and entrepreneur, founding two companies along the way. He has been Senior Fellow at the Discovery Institute since 2010, after a six-year affiliation with Stanford’s Hoover Institution. He has had over 300 guest appearances on radio and TV and has written three books and over 300 published articles in the Wall Street Journal, Investor’s Business Daily, Epoch Times, The Federalist, Newsmax, USA Today, Barron’s Financial, New York Post, and Chicago Tribune, and some 40 other newspapers and journals in the U.S., Asia and Europe. He is a graduate of the University of Chicago with honors (B.A. and M.A.) and received his Ph.D. from Boston University.