WHAT DOES THE 2ND AMENDMENT MEAN? 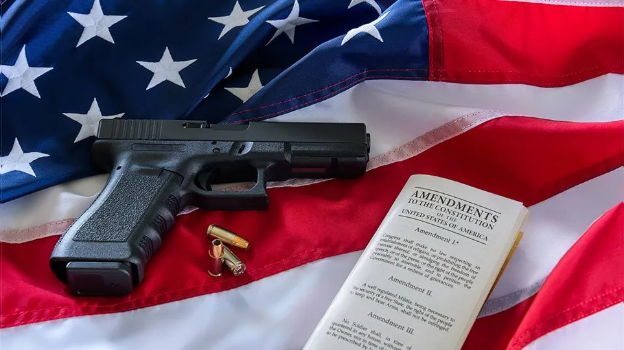 WHAT DOES THE 2ND AMENDMENT MEAN?

CAN A PUBLIC CARRY LICENSE HAVE “PROPER-CAUSE” REQUIREMENTS?

In New York State Rifle Pistol Association. v. Bruen, SCOTUS was dealing with the case of two adult, law-abiding New York residents who applied for unrestricted licenses to carry a handgun in public based on their generalized interest in self-defense and were denied those licenses because they failed to satisfy the “proper cause” requirement of the law. The Court decided the New York requirement violated the 2nd Amendment of the Constitution.

Before considering what was written in the case, it is important to acknowledge one overriding concern. Even though the opinions of the various justices discuss much of the understanding of the 2nd Amendment today by the Court relative to “self-defense,” they do not discuss the real reason it exists. The Amendment was put in place so citizens could  be prepared in the event they needed to resist the federal government. This is supported by the fact that the first draft of the Amendment said “being the best security of a free country;” however, that was changed to the final language “being necessary to the security of a free State.” The federal government was being created then and the delegates from the states wanted to make sure their citizens could resist being taken over by that federal government if it overreached their interests.

In District of Columbia v. Heller, 554 U. S. 570 (2008), and McDonald v. Chicago, 561 U. S. 742 (2010), we recognized that the Second and Fourteenth Amendments protect the right of an ordinary, law-abiding citizen to possess a handgun in the home for self-defense. In this case, petitioners and respondents agree that ordinary, law-abiding citizens have a similar right to carry handguns publicly for their self-defense. We too agree, and now hold, consistent with Heller and McDonald, that the Second and Fourteenth Amendments protect an individual’s right to carry a handgun for self-defense outside the home.

He continues with what is the crux of the case:

“The parties nevertheless dispute whether New York’s licensing regime respects the constitutional right to carry handguns publicly for self-defense. In 43 States, the government issues licenses to carry based on objective criteria. But in six States, including New York, the government further conditions issuance of a license to carry on a citizen’s showing of some additional special need. Because the State of New York issues public-carry licenses only when an applicant demonstrates a special need for self-defense, we conclude that the State’s licensing regime violates the Constitution.”

The first thing you notice is the specific language above stating that “In 43 States, the government issues licenses to carry based on objective criteria.” The reason that is important is the Court only decides the question presented to it so there is nothing in the decision that affects whether the licenses issued on “objective criteria” are in violation of the 2nd Amendment.

It is my view that any condition required by a government violates the Amendment because it specifically states“… the right of the people to keep and bear Arms, shall not be infringed” so even those withheld unless “objective criteria” are met should not be allowed. Infringed clearly means “to encroach upon in a way that violates …  the rights of another” https://www.merriam-webster.com/dictionary/infringed  It violates the rights of a person to have to fulfill even objective criteria to be allowed to keep and bear arms under the language of the 2nd Amendment of the Constitution.

As I said in my book, “The Tyrannical Rule Of The U.S. Supreme Court; How The Court Has Violated The Constitution:”

“You will notice that there are no limitations on this right. How then can limitations be placed on this right by the Court under the plain language of the Constitution?  Because the Court has been allowed to get away with it!” p.117, Amazon, paperback, 2 new from $15.50, DonBrockettsbooks.

The specific holding of the Bruen case is:

As you can clearly see SCOTUS is still not finding itself bound by the language of the Amendment. Instead they preface the fact regulations can exist as long as they are “consistent with this Nation’s historical tradition of firearm regulation.”

Ironically, the Court inconsistently in the next sentence recognizes that it is still not following the language of the Constitution by stating:

“Only if a firearm regulation is consistent with this Nation’s historical tradition may a court conclude that the individual’s conduct falls outside the Second Amendment’s “unqualified command.”

“ … The Second Amendment “is the very product of an interest balancing by the people” and it “surely elevates above all other interests the right of law-abiding, responsible citizens to use arms” for self-defense. Heller, 554 U. S., at 635. It is this balance—struck by the traditions of the American people—that demands our unqualified deference.”

If true wouldn’t one think the Court would adhere to the clear language of the Amendment which is stated without any qualifiers? Any deviation from the language is created by the Court which clearly is making law by its interpretations. Citizens are not bound by unlawful rulings of the Court in violation of the Constitution which clearly states in Article VI:

“ … This Constitution, and the Laws of the United States which shall be made in Pursuance thereof; … shall be the supreme Law of the Land …

While a substantial part of the opinion is interesting from a historical perspective with respect to English weapons and the carrying of them and restrictions on the carrying of weapons in America after the revolution, it is not necessary to the opinion.

The opinion ends with this language confusingly basing the decision on the 14th Amendment:

New York’s proper-cause requirement violates the Fourteenth Amendment in that it prevents law-abiding citizens with ordinary self-defense needs from exercising their right to keep and bear arms….”

Justice Alito in a concurring opinion comments on the dissenting opinion and states:

“Much of the dissent seems designed to obscure the specific question that the Court has decided, and therefore it may be helpful to provide a succinct summary of what we have actually held….”

“ … today’s decision therefore holds that a State may not enforce a law, like New York’s Sullivan Law, that effectively prevents its law-abiding residents from carrying a gun for this purpose.” [to be safe outside the home] bracketed material added by me.

“That is all we decide. Our holding decides nothing about who may lawfully possess a firearm or the requirements that must be met to buy a gun. Nor does it decide anything about the kinds of weapons that people may possess. Nor have we disturbed anything that we said in Heller or McDonald v. Chicago, 561 U. S. 742 (2010), about restrictions that may be imposed on the possession or carrying of guns.”

So it appears SCOTUS is still not prepared to say the 2nd Amendment means what it says. So much for giving us clear guidance on the issue of weapons carrying and use under the Constitution.

Classically, as SCOTUS has so many times before when “interpreting” a clause of the Constitution which is clear on its face, Kavanaugh continues:

“ … Properly interpreted, the Second Amendment allows a “variety” of gun regulations. Heller, 554 U. S., at 636. As Justice Scalia wrote in his opinion for the Court in Heller, and JUSTICE ALITO reiterated in relevant part in the principal opinion in McDonald:

Like most rights, the right secured by the Second Amendment is not unlimited. From Blackstone through the 19th-century cases, commentators and courts routinely explained that the right was not a right to keep and carry any weapon whatsoever in any manner whatsoever and for whatever purpose…. [N]othing in our opinion should be taken to cast doubt on longstanding prohibitions on the possession of firearms by felons and the mentally ill, or laws forbidding the carrying of firearms in sensitive places such as schools and government buildings, or laws imposing conditions and qualifications on the commercial sale of arms. [Footnote 26: We identify these presumptively lawful regulatory measures only as examples; our list does not purport to be exhaustive.]

We also recognize another important limitation on the right to keep and carry arms. Miller said, as we have explained, that the sorts of weapons protected were those in common use at the time. We think that limitation is fairly supported by the historical tradition of prohibiting the carrying of dangerous and unusual weapons.” Heller, 554 U. S., at 626−627, and n. 26 (citations and quotation marks omitted); see also McDonald, 561 U. S., at 786 (plurality opinion).”

So it appears neither Kavanaugh nor Roberts agrees with the clear language of the 2nd Amendment.

Justice Barrett, perhaps understandably since she was a law professor prior to her appointment to the Court, asks a number of questions she thought the Court should have addressed such as:

“ … the Court does not conclusively determine the manner and circumstances in which postratification practice may bear on the original meaning of the Constitution.”

“Second and relatedly, the Court avoids another “ongoing scholarly debate on whether courts should primarily rely on the prevailing understanding of an individual right when the Fourteenth Amendment was ratified in 1868” or when the Bill of Rights was ratified in 1791…. “

Both are interesting issues but dicta in the case, that is, unnecessary for the determination of the case but giving us a clue about what judges worry about when they know they are basically “making law” by their interpretations of the Constitution.

Finally, we come to the dissenting opinion written by Justice Breyer, who has now retired from the Court, joined by Justices Sotomayor and Kagan. He starts his opinion with:

Thereafter, for nine page he describes the present situation in this country and the statistics relative to the misuse of guns. He states, in a telling way about how he thinks some SCOTUS judges can twist the language of the Constitution:

“ … the Court wrongly limits its analysis to focus nearly exclusively on history. It refuses to consider the government interests that justify a challenged gun regulation, regardless of how compelling those interests may be. The Constitution contains no such limitation, and neither do our precedents…. “

What is wrong with that statement? The answer is obvious. Instead of recognizing that the language of the 2nd Amendment in the Constitution contains no limitations, Justice Breyer with whom Justices Sotomayor and Kagan apparently agree, turns that language on its head and says there are no limitations specifically set out in the Constitution, therefore the judges can establish any they desire. And that, of course, is what they have done.

“In my view, when courts interpret the Second Amendment, it is constitutionally proper, indeed often necessary, for them to consider the serious dangers and consequences of gun violence that lead States to regulate firearms… “

Wow! So that is why we have so many modifiers attached to what we thought was clear language in the Constitution. For example, freedom of speech is ok unless it interferes with what the listener wanted to hear because of their sensibilities. Or, freedom of religion is for me but not for thee because if we don’t agree with your religion or its practices we can limit them as we desire. The list could go on and on but you see the problem.

Our founders wanted what was clearly expressed to prevail as opposed to what those who once they became a part of the government wanted to control them with at their whim. As revolutionaries against what they felt was an overbearing English government our founders apparently wanted people to exercise their freedom from governmental control and expressed it clearly in the founding document of our country – the Constitution. When will that be clearly understood and supported by SCOTUS?

Here is a link to the full text of the case: