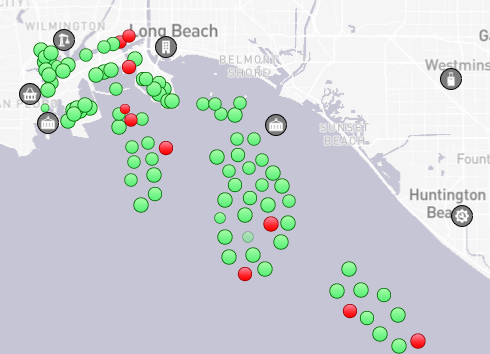 Getting ready for the holiday selling season.

There are currently 56 cargo ships anchored in front of the ports of Los Angeles and Long Beach. This includes a record of 44 container ships, bypassing the infamous record of 40 set in February 2021. This is the run-up to the holiday selling season in the US, when retailers are desperately trying to stock up their inventories, which from many categories, including apparel, have already been running low. Green dots are cargo ships, red dots are tankers (image via Maritime Traffic):

Since production of many consumer goods has been offshored by Corporate America, from Apple to Zappos, to cheap-labor countries, this stuff has to be imported.

There have now been some indications that consumer demand for goods might be backing off just a tad from the historic spike. But this could be due to a combo of factors, including retailers running out of stock on some items. Numerous retailers have complained about this, including apparel retailers such as Nordstrom.

Despite an apparent loss of upward momentum over the past few months, sales remained at mind-bendingly high levels: 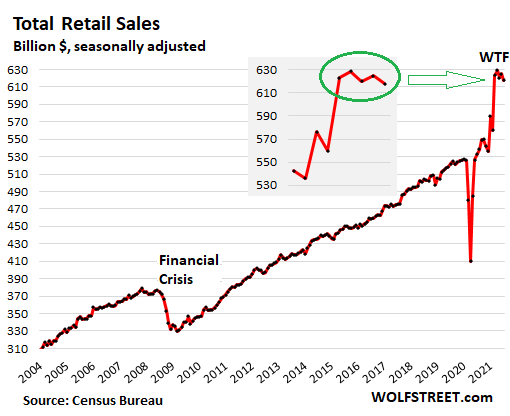 Now is peak shipping season in the run-up to holiday selling season, and ports are congested, rail yards are bogged down with containers, shippers are complaining about a driver shortage in the trucking industry, warehouses are full, everyone is complaining about labor shortages, and containers get stuck and tangled up and rerouted.

Each container that sits on a ship that is at anchor waiting for a berth, or that is stuck in a rail yard or port somewhere, is a container that another shipper with merchandise ready to ship cannot get their hands on.  And there has been a mad scramble underway to just get empty containers.

The port congestion in Asia isn’t helping. On August 11, China suspended operations at the newly built container terminal at Ningbo-Zhoushan port, China’s second busiest port after Shanghai, and instantly, everything got a lot worse. Container carriers rerouted vessels and told customers of long delays, as other ports couldn’t handle the additional vessels either.

The container terminal at Ningbo resumed operations three days ago. But the backlog of containers at the port, on vessels, with China’s trucking companies and railways, and the chaos it caused in the shipping world, will continue to disrupt the flow of containers and merchandise possibly for weeks.

At the Port of Los Angeles, loaded container imports for the first seven months through July this year soared by 20% from the same period in the record year 2019, to 3.3 million TEU (Twenty-foot Equivalent Units, a standard measure in the industry): 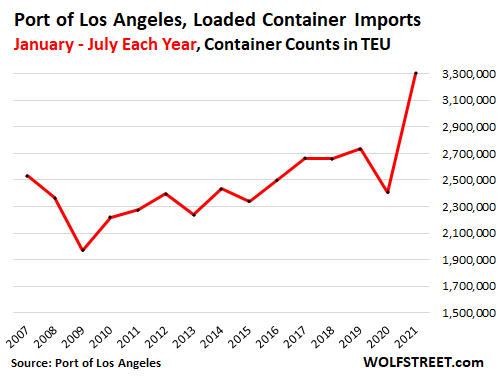 The average rate to ship a 40-foot container from Shanghai to Los Angeles rose to a record of $11,362 in the week through August 26, over five times the typical rate before the pandemic of around $2,000, according to data from Drewry Supply Chain Advisors.

Drewry’s composite index or world container rates jumped to a new record of $9,818 per 40-foot container. The index had been running well below $2,000 before the pandemic. 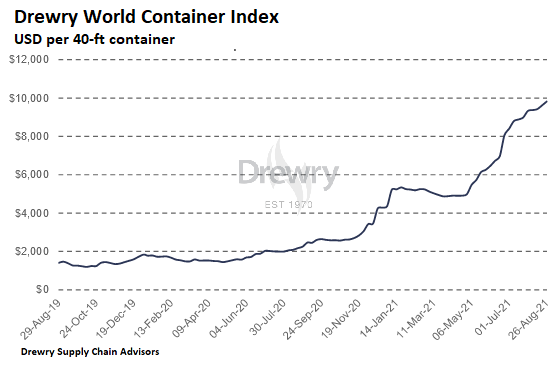 Rates for shipping containers in the other direction have also soared, but from much lower levels: From Los Angeles to Shanghai, the average rate jumped by 170% year-over-year to $1,398 per 40-foot container, according to Drewry.

When you talk to people have to get containers shipped to the US or from the US to Asia, you hear a litany of stories about “containers from hell,” that got hung up somewhere, then were rerouted, then got hung up somewhere else, and finally arrived way behind schedule, and after endless hours of trying to sort it all out.

And they’re complaining about sky-high rates that exceed Drewry’s averages here by big margins. There are complaints that the container carriers, after running through very rough waters in 2015 and 2016, consolidated too much, and now the few remaining major carriers are just doing whatever they want and charging whatever they want, and are getting away with it, to the endless frustration of shippers. And those shippers then have to figure out a way to pass on the extra costs to their customers. And that’s happening too.