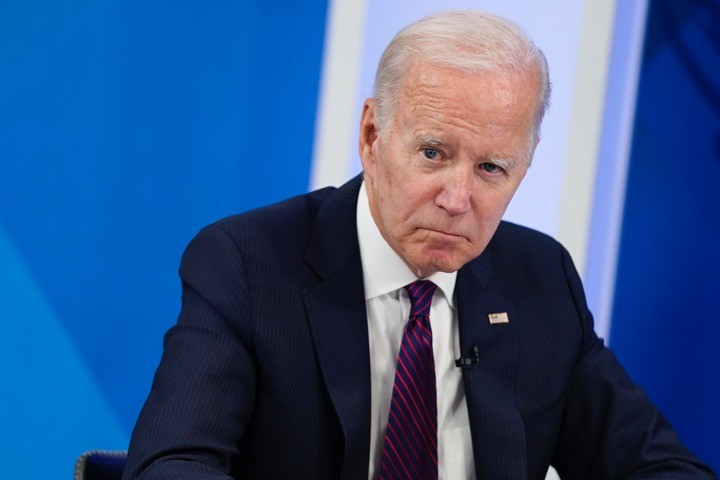 Joe Biden unilaterally abolished protections preventing the federal government from spying on Americans without a warrant.

After expressly revoking the previously enacted protections against collection of domestic surveillance data without a warrant, the Biden order declares that “Signals intelligence activities shall be authorized by statute or by Executive Order, proclamation, or other Presidential directive and undertaken in accordance with the Constitution and with applicable statutes and Executive Orders, proclamations, and other Presidential directives.”

Only two of the items in that list — statutes and the Constitution — have the force of law in the United States. The latter of those two legal documents explicitly declares in fact that “All legislative Powers herein granted shall be vested in a Congress of the United States….” That very clear language not only grants exclusive power to Congress to make laws for the union, but by implication denies such authority to the president of the United States! Therefore, Mr. Biden, your executive orders, proclamations, and directives are of no legal effect in the union.

In Section 2(a)(ii), the order sets forth that “Signals intelligence activities shall be subject to appropriate safeguards, which shall ensure that privacy and civil liberties are integral considerations in the planning and implementation of such activities….”

Well, as long as “appropriate safeguards” include the constitutional protections against unwarranted searches and seizures.

The executive order mentions the Constitution in passing, but read the guiding principles for such unwarranted searches and seizures as set out in Section 2(a)(ii)(A):

“Signals intelligence activities shall be conducted only following a determination, based on a reasonable assessment of all relevant factors, that the activities are necessary to advance a validated intelligence priority….

But don’t worry, citizen! The president promises that “Signals intelligence activities shall be subjected to rigorous oversight in order to ensure that they comport with the principles identified above.”

Those principles don’t include the Fourth Amendment’s very clear protections against such “signals intelligence activities.”

And in case you’re not convinced that this executive order is a direct assault on and abolition of the Fourth Amendment, consider this provision:

So, the arbiter of what information can be searched and seized and from whom and when and how is no longer the U.S. Constitution, but the autocratic authority of the president with advice and consent not of the people’s representatives, but of a bureaucrat appointed by the president, a bureaucrat who is unelected by the people and completely unaccountable to them.

Not to worry, though; the executive order declares that: “Signals intelligence collection activities shall be as tailored as feasible to advance a validated intelligence priority and, taking due account of relevant factors, not disproportionately impact privacy and civil liberties.”

So, the new standard is whatever is feasible in the determination of the president and his national security advisers. Mind you, the previous standard was a warrant backed by probable cause!

See? You’re safe, citizen! Your personal information may only be gathered up in an intelligence surveillance dragnet if a couple of Biden administration bureaucrats say it’s OK! Nothing to worry about.

And guess what else? If those guys aren’t collecting data on the right people — you know, people the president wants targeted — in the EO the president grants to himself the authority to “authorize updates to the list of objectives in light of new national security imperatives, such as new or heightened threats to the national security of the United States, for which the President determines that bulk collection may be used.”

In light of the Department of Homeland Security’s directive to consider someone flying a Gadsden Flag or displaying a “Three Percenter” sticker to be a “domestic threat,” is there any doubt that such decals or displays could convince the president to “authorize updates to the list of objectives?”

Finally, guess how many times in his executive order Joe Biden references the Constitution’s protection against unwarranted searches and seizures.

Now, to be fair, the Constitution is mentioned by the president as giving him the authority to issue this order and for it to be carried out as if it were law. And later, the EO does mention the Constitution twice in a list of possible limitations on surveillance and data collection. But that’s it.

One more test: Guess how many references to executive orders, memoranda, proclamations, and directives being the controlling standards are made in the EO.

Seven. Presidential orders, memoranda, proclamations, and directives are listed seven times in the EO as being legally binding.

I’m no mathematician, but seven is greater than zero.

And even though I’m no mathematician, I can read, and once again I’ll refer the reader to Article I, Section 1 of the U.S. Constitution: “All legislative Powers herein granted shall be vested in a Congress of the United States….”

Finally, how’s this for some comforting language:

Did you catch that? This executive order not only effectively repeals the Fourth Amendment, but it grants to a bureaucrat the power to create a special court to determine if your rights have been violated! You don’t have to worry about going to an actual court, citizen! You’ll get to go to the Biden administration’s very own “Data Protection Review Court.” In other eras, a court like this might have been called a Star Chamber.

Bet you can’t guess who will select the judges to sit on the bench of this new court! Let’s read on and find out:

“The Attorney General, in consultation with the Secretary of Commerce, the Director, and the PCLOB [Privacy and Civil Liberties Oversight Board], shall appoint individuals to serve as judges on the Data Protection Review Court….

Shocker! Bureaucrats appointed by Biden will choose the judges who will decide if Biden and the bureaucrats have exceeded the authority they gave themselves. Sounds like republican government to me (see Article IV, Section 4 of the U.S. Constitution).

Our Founding Fathers would never have allowed such denial of their liberty.

In 1776, George Mason, the principal author of the Virginia Declaration of Rights — a document of profound influence on the construction of the federal Bill of Rights — upheld the right to be free from such searches, as well: “That general warrants, whereby any officer or messenger may be commanded to search suspected places without evidence of a fact committed, or to seize any person or persons not named, or whose offence [sic] is not particularly described and supported by evidence, are grievous and oppressive, and ought not to be granted.”

“The right of the people to be secure in their persons, houses, papers, and effects, against unreasonable searches and seizures, shall not be violated, and no warrants shall issue, but upon probable cause, supported by oath or affirmation, and particularly describing the place to be searched, and the persons or things to be seized.

The rights guaranteed by the Fourth Amendment are under nearly constant assault by the forces of the federal government. From NSA surveillance to IRS use of tax records as a political tool, the papers, effects, and homes of all Americans are now de facto denied the protections our Founders held so dear.

The undeniable truth is that not a single one of our Founding Fathers, not even the most ardent advocate of a powerful central government, would have remained even one day at the Philadelphia Convention if he had believed that the government they were creating would become the instrument of tyranny that it has become.

Taken together, the federal government’s consolidation of control and cognizance reduces every American to the status of “suspect.”

And this latest edict from Emperor Biden purports to legalize that status.

Joe Wolverton II, J.D., is the author of the books The Real James Madison and “What Degree of Madness?”: Madison’s Method to Make America STATES Again. His latest book — The Founders’ Recipe — provides selections from the 37 authors most often quoted by the Founding Generation. He hosts the YouTube channel “Teacher of Liberty” and the Instagram account of the same name.