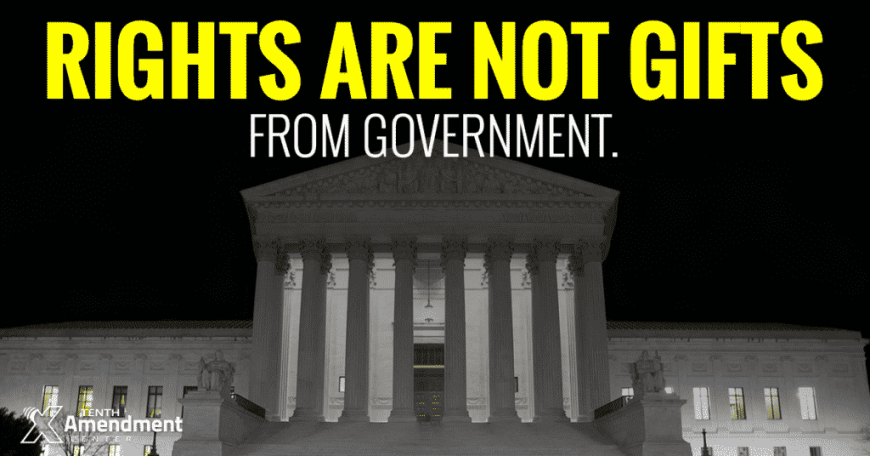 The world is filled with self-evident truths — truisms — that philosophers, lawyers and judges know need not be proven. The sun rises in the east and sets in the west. Two plus two equals four. A cup of hot coffee sitting on a table in a room, the temperature of which is 70 degrees Fahrenheit, will eventually cool down.

These examples, of which there are many, are not true because we believe they are true. They are true essentially and substantially. They are true whether we accept their truthfulness or not. Of course, recognizing a universal truth acknowledges the existence of an order of things higher than human reason, certainly higher than government.

The generation of Americans that fought the war of secession against England — according to Professor Murray Rothbard, the last moral war Americans waged — understood the existence of truisms and recognized their origin in nature.

The most famous of these recognitions was Thomas Jefferson’s iconic line in the Declaration of Independence that self-evident truths come not from persons but from “the Laws of Nature and of Nature’s God.” Thus, “All Men are created equal and are endowed by their Creator with certain unalienable Rights, that among these are Life, Liberty, and the Pursuit of Happiness” is a truism.

Jefferson’s neighbor and colleague, James Madison, understood this as well when he wrote the Bill of Rights so as to reflect that human rights do not come from the government. They come from our individual humanity.

Thus, your right to be alive, to think as you wish, to say what you think, to publish what you say, to worship or not, to associate or not, to shake your fist in the tyrant’s face by petitioning the government, your right to defend yourself and repel tyrants using and carrying the same weapons as the government does, your right to be left alone, to own property, to travel or to stay put — these natural aspects of human existence are natural rights that come from our humanity and for the exercise of which all rational persons yearn.

This is the natural rights understanding of Jefferson’s Declaration and Madison’s Bill of Rights, to the latter of which all in government have sworn allegiance and deference.

A privilege is something the government doles out to suit itself or calm the masses. The government gives those who meet its qualifications the privilege to vote so it can claim a form of Jeffersonian legitimacy. Jefferson argued in the Declaration that no government is morally licit without the consent of the governed.

No one alive today has consented to the government, but most accept it. Is acceptance consent? Of course not — no more than walking on a government sidewalk is consent to government’s lies, theft and killing. Surely, the Germans who voted against the Nazis and could not escape their grasp hardly consented to that awful form of government.

We need to distinguish between privileges that the government doles out and rights that we have by virtue of our humanity, rights so human and natural that they exist in all persons even in the absence of government.

But if a right is a claim against the whole world, how can a government — whether popular or totalitarian or both — extinguish it by death or slavery? The short answer is no governments, notwithstanding the public oaths their officers take upon assuming office, accept the natural origins of rights. To government, rights are privileges.

Government is an artificial creation based on a monopoly of force in a geographical area that could not exist if it did not negate our freedoms. Government denies our rights by punishing the exercise of them and by stealing property from us.

Rights are not just claims against the government. They are claims against the whole world. This was best encapsulated by Rothbard’s non-aggression principle, which teaches that initiating all real and threatened aggression — whether by violence, coercion or deception — is morally illicit. That applies to your neighbors as well as to the police.

Of course, in Rothbard’s world, there would be no government police unless all persons consented; and he wouldn’t have. A private police entity — paid to protect life, liberty and property — would be far more efficient and faithful to its job — which it would lose if it failed — than the government’s police, which thrives on assaulting life, liberty and property and keeping their jobs.

The exercise of rights requires abandonment of fear, acceptance of truth, and rejection of compromise with government. As Ayn Rand famously observed, any compromise between good and evil, natural rights and slavery, food and poison, results in death — death of the body, death of liberty, death of both.