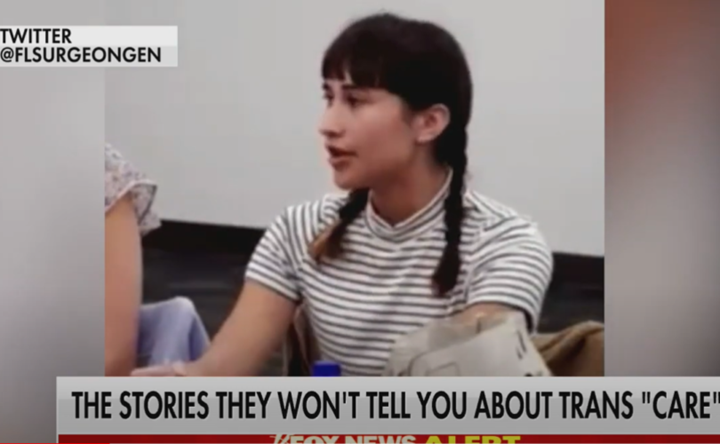 ‘I realized the beauty of motherhood was stolen from me by medical professionals who my family entrusted me to,’ said 18-year-old Chloe Cole.

During a press conference in front of the White House, a former “transgender” teenager gave a powerful testimony condemning so-called “gender-affirming care” for children.

Eighteen-year-old Chloe Cole shared her story in support of the Protect Children’s Innocence Act, a new bill introduced by Republican U.S. Rep. Marjorie Taylor Greene which would prohibit any “gender-affirming care” for minors. 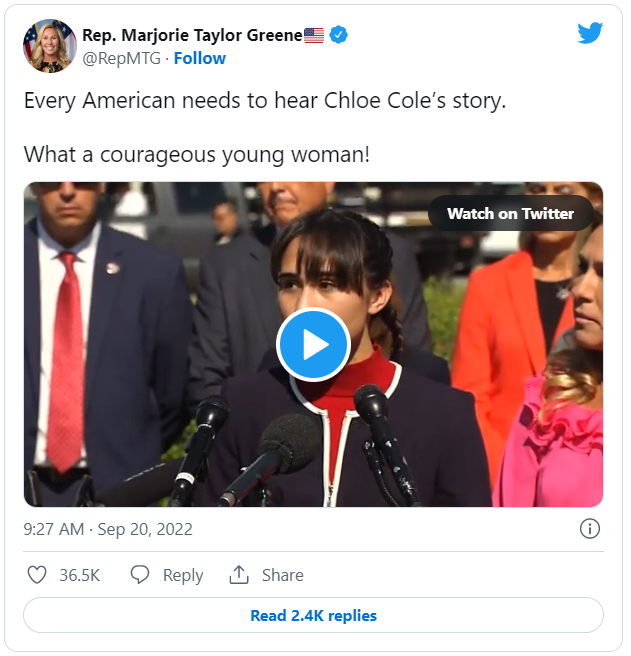 “Over the past decade, there has been as high as a 4,000 percent increase in children being referred to so-called gender clinics across the nation. I was one of those children,” Cole said. “My story is a cautionary tale.”

“Children and parents across the country have been caught off guard by gender ideology. Discussions about transgenderism and gender identity went from being a relatively benign social oddity to a doctrine that has invaded nearly every academic, medical, and educational institution seemingly overnight. How did we get to this point?”

The young woman declared that “Americans deserve to know the truth about this radical and perverse ideology, marketed as necessary and lifesaving healthcare.”

Cole outlined the key points of her story, which began when she told her parents at 12 years old that she was a boy. The next year, she was put on puberty blockers and received testosterone injections. She said that her parents were pressured into supporting the lie when medical professionals asked them, “Would you rather have a dead daughter, or a living son?”

“Given these options, what loving parent wouldn’t choose to transition their child? Scared for my life, my parents were prepared to sign anything the doctors asked.”

At age 15, Cole went into surgery for a double mastectomy, “the kind that breast cancer patients get.” It was not until she was 16 that the girl understood that her perceived solution to her problems was a lie.

“I realized the beauty of motherhood was stolen from me by medical professionals who my family entrusted me to,” she said. “A child does not, in fact, know who they are at 12 years old. I realized that I wanted to be what I always was, and forever will be: a woman.”

Once she realized her mistake, Cole then faced the challenges of getting off the drugs she had grown accustomed to and breaking the news to her friends and family.

“My parents were shocked and felt like they had failed me on every level imaginable. My friends all turned against me,” she said. “I was a joke. I was a fraud. I was many years behind in development, incapable of feeding my future children, and worst of all, completely alone.”

She also emphasized that the healthcare professionals “who got me into this mess” did nothing to help her when she regretted her decision to “transition.”

“It almost killed me, as it has killed many who regret transition.”

Cole explained that the presence of the LGBT agenda on social media greatly influenced her gender dysphoria.  “I saw the unbelievable amounts of praise and attention that they got online, and subconsciously, I yearned to have a piece of it. With every milestone of my medical transition, I was given more and more attention and celebration. It was the ultimate high.”

However, the young woman declared that no matter what men or women do to act like the opposite sex, “it does not change their biology.”

“Up until today, most politicians on the left and right have done nothing but get into Twitter fights on this issue. There is no second chance at childhood. No child deserves to suffer under the knife of a ‘gender affirming’ surgeon,” she said.

Cole previously shared her story in July, when she testified in favor of a proposal to ban the use of Medicaid funds for “transgender” drugs and surgeries in Florida.

This fall, a film titled “The Detransition Diaries” will feature three other female de-transitioners who share the dangers of chemical and genital mutilation.