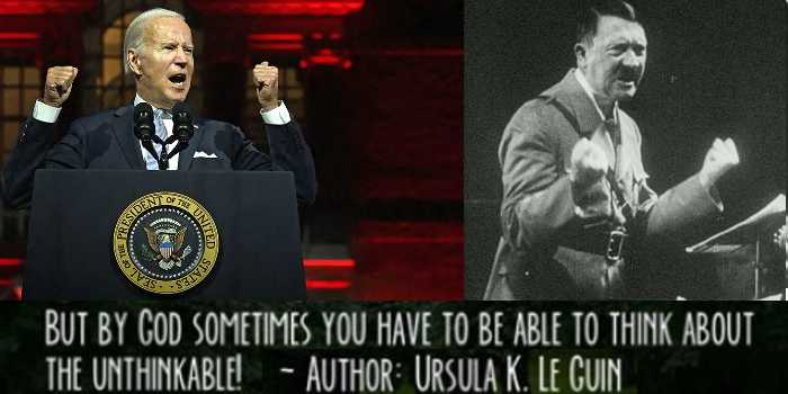 Start thinking the unthinkable. They are using your trust in them against you. Stop giving in to their chaos and stop living in fear! We can and must stop this

As a baby boomer, I was reared by parents that respected authority.  They were parents of The Great Depression.  My grandparents saw the Brooklyn Bridge being completed (or as my Italian grandmother would say…Brookalino) and were grateful and proud to be new Americans. They knew adversity and heartbreak. They laughed and they cried having lost two of their six children from disease, their eldest daughter to the Spanish Flu at 19, their youngest son from kidney disease at 14, their father (the grandfather I never knew) from an accident on their farm in Northern New Jersey.

They taught us to respect authority, and we did, but, like many of our generation, with a healthy skepticism.  Maybe because we were so much more educated (we weren’t pre-occupied with putting food on the table). We knew of our founding fathers, demanding and fighting to the death, for what they were denied…our God-given natural rights to freedom, self-defense, personal property, free speech, shaping our own future.

A cabal of godless Globalist Elites have decided, without a vote, without authority, endorsement, consent, or even scientific consensus, to terminate our way of life

Thinking the unthinkable is something we all avoid, forcefully put aside, being unwilling to deal with any ugly truth.  It is hard.  It’s especially hard for what is on the news.  Too many people turn it off, or change the channel.  As a writer of current events, I don’t have that luxury.  I live with it, suffer with it, deal with it, and hopefully give readers the benefit of time spent in digging, reporting and analyzing.

Although this article is read in twenty different countries, most of us are proud Americans.  Many of us have bled, watched as others died for this country and much of the world.  We’re not perfect and never thought we could be.

And here we are 246 years into the life of our nation, with many of us now thinking the unthinkable.  Could it be that the country we paid a steep price to protect, even took for granted, has turned against us?  It’s not just here, but around the world.  Western Civilization is crumbling.

No country or Axis power could defeat the United States and its allies so now we are compelled to commit suicide?

A cabal of godless Globalist Elites have decided, without a vote, without authority, endorsement, consent, or even scientific consensus, to terminate our way of life.  Like Satan himself, they turn God’s law inside out, giving the planet dominion over us instead of the other way around.  These ‘experts’ spent years coming up with warnings of pandemics, climate change, environmental catastrophe, and economic reasons why we are unworthy to continue as such with their constant bogus predictions.  A sample from the experts:

Bogus Predictions from the Elite

2019 We have eight or nine years to address climate change (Bernie Sanders) 2021-present:  Dr. Anthony Fauci: “The vaccine is safe and effective and will prevent you from getting COVID”.  It is neither.

Joe Biden: “You’re not going to get COVID if you have these vaccinations.”

Do you see a pattern emerging?

The only way we are going to see plague is if they create it…they have.  The only way we are going to see famine is if they create it…they’re doing it.  The only way there is going to be a shortage of oil and energy is by not producing it…they’re not!  Why did we go from energy independence to energy dependence in just a few months? Why, when we have more oil in the Dakotas and Montana than all of the Middle East. Why are Dutch farmers being shut down, one of the largest exporters of food products?  People will be cold this winter, food will be expensive and no longer plentiful, and gas and diesel will be expensive because these criminals are making it so. They want power, money and control.  People are at the bottom of their priorities. Chaos and fear is their stock and trade.  They need it.  They feed off it.

Gov. Gavin Newsom’s moronic regulation of no internal combustion vehicle sales by the middle of next decade shows how irrational he and his ilk are.  Truth is, fossil fuels will be with us for a long time to come.  We will never run out.  Newsom doesn’t even have the power grid to handle EV battery charging, having restricted charging to several hours a day.  When the technology is there, we will make the appropriate changes, not rushing to deny food, fuel, warmth, and freedom of movement to anyone in a premature blitz.

When are we going to stop listening to these fools and put these charlatans to bed?  What happened to that healthy skepticism of our generation?  Gift yourself with some critical thinking.  These people are liars! Nations, multi-national corporations, pharmaceutical companies, the healthcare industry, the media, the UN, The IMF, The WHO, governments around the world (including our present government) have bought into this fraud, this treachery, led by the World Economic Forum with promises of power and money.  They are now all complicit in the greatest crime against humanity in history….I know, unthinkable, but there it is.

The entire environmental and climate push is a hoax!

We have made great strides in environmental science without the scare tactics, without the threats of doom or the pick-pocketing of every tax-payer.

I say this, especially to governors…think the 10th Amendment.  Put your state up front.  If you need energy, produce it.  If you need food, grow it.  Do not sit back and watch the federal government or globalist sociopaths bring our country and your state to its knees.  Biden and Obama are continuing their quest to fundamentally change America.

Start thinking the unthinkable. They are using your trust in them against you.  Stop giving in to their chaos and stop living in fear!  We can and must stop this.

By Ray DiLorenzo ——Bio and Archives