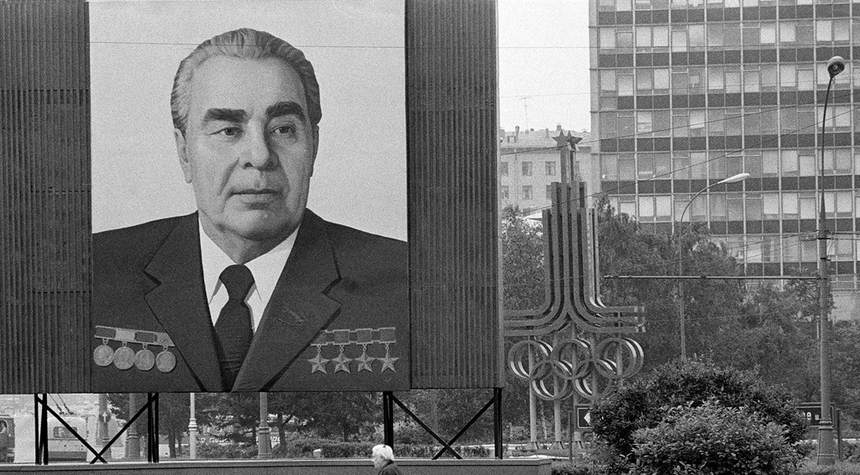 In Marxist theory, the final stage of socialism is true communism, when everyone shares of his or her resources equally, the state withers away, and true justice finally dawns upon the earth. We never have seen that stage and never will, because Marxism is rancid pseudo-religious hogwash that runs directly contrary to human nature. The real final stage of socialism is what we saw in the last ten years of the Soviet Union: an entrenched, all-encompassing, corrupt, and inefficient state bureaucracy nominally presided over by a succession of senescent, barely-there incompetents. With his disgraceful descent into open authoritarianism Thursday evening, Old Joe Biden and the Democrats signaled their intention to skip right to that final stage: they’ve already got the doddering figurehead and the ravenous bureaucracy firmly in place.

During the first stages of socialism in Russia right after the Bolshevik revolution, the new workers’ paradise appeared from the outside, where the gulags weren’t so easy to see, to be youthful, dynamic, and promising. The American journalist Lincoln Steffens visited Soviet Russia in 1919 and was enthusiastic, declaring: “I have seen the future, and it works.” Other American intellectuals visited the Soviet Union and were likewise enthused; the New York Times’ Walter Duranty was so enamored of the place that he willfully covered up evidence of Stalin’s Ukrainian famine so that Times readers wouldn’t get a negative view of the new Russia.

This sort of thing went on for years. Two decades later, with the U.S. on the brink of entering World War II, three young folk singers named Pete Seeger, Woody Guthrie, and Josh White, who called themselves the Almanac Singers, recorded Songs for John Doe, an album of peace songs. This was the time of the Nazi-Soviet pact, and as Seeger, Guthrie, and White were all hardcore Communists, they didn’t want the U.S. joining any war against Stalin’s ally Hitler. Hitler soon betrayed Stalin and invaded the Soviet Union, and suddenly these pacifists were passionate for the war and able to pose as patriots. For decades, Seeger, Guthrie, and multitudes of others worked tirelessly to make the Soviet Union and Marxism chic among American Leftists. It worked.

The Soviet Union itself, meanwhile, was governed first by Lenin and then by Stalin. Both were unscrupulous, inhuman, murderous thugs, and both remained in power only by ruthless reigns of terror and cults of personality that made them into gods more efficiently and comprehensively than any Roman emperor was ever deified. Even today, in post-Soviet Russia, Lenin is respected, and Stalin is revered. Lenin’s Tomb is still situated prominently in the Kremlin and gets a million visitors a year. Not far from it are the much more modest graves of most of the other Soviet leaders; Stalin’s is the only one that Russian visitors regularly decorate with flowers.

But in the last days of the Soviet Union, the ruling elite grew old and relied on the bureaucrats, who like cockroaches were always there, outlasting all the rulers, to do the real work of keeping the massive state apparatus lumbering along. It was hard to build a cult of personality around a succession of old, feeble, barely coherent figureheads, and few made more than a half-hearted attempt to do so. Leonid Brezhnev died at age 75 in 1982 and was succeeded as General Secretary of the Communist Party of the Soviet Union, the de facto head of government, by Yuri Andropov, who was a relatively young 68 but in extremely poor health. Andropov was nominally in power until he died in 1984, although it’s not at all clear that he actually did anything while he was the man in charge. The same could be said for his successor, 72-year-old Konstantin Chernenko, who acted as the man whose photo was on the wall in all the buildings and not much more until his own death thirteen months later.

If these guys were the future, it no longer worked; on the contrary, it had rheumatoid arthritis. Back in the 1980s, this succession of elderly company men was widely seen as symbolic of the sclerotic, calcified nature of the Soviet bureaucracy and Soviet society in general. And now that Joe Biden is out in the open about criminalizing his opposition and brooking no dissent, we can skip here in the United States right to the final stage of socialism. We have the entrenched deep-state bureaucracy, and we have the dementia-ridden septuagenarian puppet in charge, so we’re all set.

All we need now is a Ronald Reagan to set the whole authoritarian house of cards on a course to tumble down so that the free republic can be restored. Maybe such an individual is already on the scene.

Robert Spencer is the director of Jihad Watch and a Shillman Fellow at the David Horowitz Freedom Center. He is author of 25 books including many bestsellers, such as The Politically Incorrect Guide to Islam (and the Crusades), The Truth About Muhammad and The History of Jihad. His latest book is The Critical Qur’an. Follow him on Twitter here. Like him on Facebook here. For media inquiries, contact communications@pjmedia.com.